I’ve been meaning to get back to the backside of Crown Mountain for another adventure since climbing the Widowmaker Arete with Nick. There’s a route called the Crater Slabs, which climbs up from the Crown Couloir and opens up onto 400m of open slabs below the summit pyramid. It’s been a Plan B idea for a while now. The North shore mountains are a good option for those days when the car breaks down, or you’re looking for a hike or scramble close to home.

There’s two options for the approach. Either take the gondola up, or hammer up the Grind or other trail to the Chalet and then along the alpine trail past Dam and Little Goat Mountain to Crown Pass. The alternative would be to approach from Lynn Valley, taking the flatter route. It’s a toss-up for which one is faster, as you have to descend quite far down from Crown Pass into Hanes Valley. If you were running the Hanes Valley loop from Lynn, this would make for a most interesting detour. From Crown Pass, descend the talus slope marked with orange wands until it joins up with the talus slope below the Widowmaker Arete. It’s tempting to traverse high and across along the rockwall below Crown, but this leads into unpleasant bushwacking. Just go down, unless you want to go deep into salmonberry and blueberry bushes.

After descending down the talus, climb back up a long talus slope to reach the couloir. There is one small couloir partway down, but it goes nowhere. The slope is a tedious mix of small rocks and bigger rocks, some rather unstable. Earlier in the season, there is likely to be snow in the couloir. With the dismal snowpack this past winter and the hot summer, the couloir was snow free, nearly bone dry and looking into good shape. We had fun climbing up the short water polished 4th class rock steps in the couloir. We had quite a scare at one point though, when the terrifying sound of rockfall could be heard thundering above. Luckily Jen and I were already behind a large boulder, and was relatively sheltered. Mark was further up, and could see that the rockfall was due to some hikers throwing rocks below, based on the arcing nature of the airborne rock, all big enough to do serious damage while rolling down the slabs into the choke-like nature of the couloir. We yelled up, and fortunately they stopped trying to kill us. So if you’re planning to climb this route, start early, try not to go on a busy August day, and hope there’s nobody above you. Helmets recommended.

Once we reached the slabs, it was straightforward scrambling to the summit. The idea is to trend up and left, following well featured rock. The final hundred metres below the summit is more exposed, and you could easily cut left to the normal trail. It is also possible to traverse right half-way up towards the Camel. The easiest route follows lines of weaknesses in the slab, littered with small unstable blocks in spots, adorn with cracks and small, somewhat friable holds. It was a straightforward and hot hike back to the Chalet, with a small detour to West Crown. This is the mostly forested peak west of Crown Mountain, but much less busy than Crown. A fun day out! 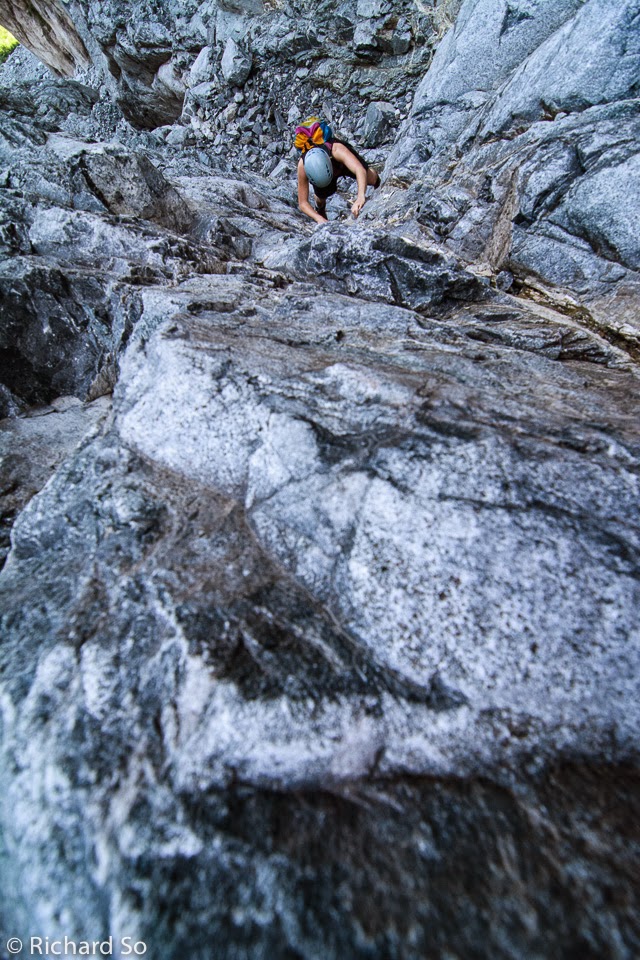