Mamquam Mountain is in the far distance, with Spire Peak at centre. Photo taken from Parapet Peak.

The powder skiing hasn’t been very good this January. Whistler recorded only 117cm last month, which sets it as the second driest January in the last ten years. This beats the measly 42cm in January 2005, the year I started skiing. No wonder I never learnt how to ski that season.

On the other hand, with good stability and clear weather, there have been some great opportunities this month to explore new areas. The highlight of the month was a fantastic daytrip to Mamquam Mountain, part of a group of isolated summits at the south end of the Mamquam Icefield. It’s one of those peaks that you can see from everywhere, especially Squamish. There’s two common approaches – the longer but more aesthetic approach from Elfin via Mamquam Lakes, and the shorter approach from the Skookum Creek roads off the Mamquam River.  In the Fairley guide, he writes that “a surprising number of parties routinely fail to climb the summit.” Pete had tried to climb Mamquam twice before, with one trip in early July where he was stopped by horrible slide alder on the Skookum road. But by going in winter, all that pesky alder was covered with snow.
With the current construction of the Skookum IPP, I thought there was a good chance the Skookum roads would be plowed far enough to make a daytrip viable.  We left Vancouver at 5:30am, early enough that if we couldn’t drove up the right roads, we would still have time to ski elsewhere. We turned off the highway at the ever familar Apron parking lot and continued for 12kms up the Mamquam River road and then turned off onto the Skookum roads. We drove through the active construction site and looked for the correct branch. Unfortunately, only the lower branch of the Skookum S Line was plowed. So we parked at the junction with the upper branch, at roughly 800m, at 1km on the S Line. I recommend contacting the Skookum office in advance to gain access onto the site.
We skied up the flat logging road, watching the sunrise over the Garibaldi massif to the west. It was great to get a different view of some familiar areas. I was a little tired from a daytrip up Rainbow Mountain the day before, so I tried my best to keep up with Pete as we slogged up five kilometres of logging roads. There are a few junctions here, so make sure you take the correct ones! My Saturday night was spent staring at Google Earth, noting which junctions to take. We left the S-Line and continued up an old cutblock, and crossed Paranoid Creek on some snow pillows. The route then climbs to the northeast up 600m of steep open forest to gain the ridge above Darling Lake. Travel was fast here, with firm snow underneath, allowing us to make quick switchbacks to the top. Early morning on the Skookum Creek road. Alpenglow on Atwell. We dropped down to Darling Lake, and climbed north through two small lakes to gain the Mamquam icefield east of Darling Peak via open south facing slopes. We were both ecstatic when we crested the icefield. What a wild area. The winds were howling, so much for a forecast of light ridgetop winds. We contoured around the north side of Delusion Peak, and finally got sight of Mount Mamquam. All of the north facing slopes were wind-hammered with layers of sastrugi on top. It didn’t look like good ski conditions from the top, so we left our skis at the base of the north face and bootpacked the rest of the top. The climb was capped off with an exposed bootpack to the top of the summit pinnacle. The Tantalus Range, Garibaldi, and Pete. We rewarded with a panoramic view from Howe Sound to Mount Garibaldi to Castle Towers to the Mount Pitt and Judge Howay. It was too windy on the top to eat my sandwich, so we quickly descended back to the one of the lakes in the basin above Darling Lake. The ski down was a mixture of sastrugi, windboard, ice, crust, and corn. The ski descent through the forest was an exercise in survival skiing. By the time we descended at late afternoon, the snow had soften up into a mashed potato consistency. I can’t remember the last time I skied so much vertical without actually making a turn. Pete descending Mamquam, with a view south towards Howe Sound. Skiing on the Mamquam Icefield. Somehow the road is uphill both ways, with waterbars along the way to slow things. It was a slow but satisfying ski back along the logging roads, complete with a spectacular golden red sunset and the illuminating moonlight. A January daytrip to Mamquam Mountain, no headlamps required! I hope this trip report inspires more people to ski here, it’s a spectacular area that’s close to home. Our route. I don’t carry around a GPS watch, so I dont know what the elevation gain and distance was, or our total moving time. It was a reasonable day trip though! 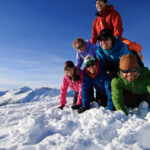