I started trail running again this spring, after taking a long break since last spring to enjoy a summer of mountain biking, climbing, followed by an amazing ski season. Since April, I’ve been running once or twice a week in order to get in shape for the annual Knee Knacker Run, a 50km race across the North Shore mountains. This year, I finished with a time of 5:55:43, placing 13th overall. The training paid off, shaving a full hour off my previous time.

Unlike last year where I tried stationary high altitude training and a diet of red wine and steak, I experimented with running on the local trails through the rainy days of April, May and June, cross-training with climbing, skiing and sailing. There were some difficult days of training, where I struggled to get out of bed to go running in the rain. This chimney isn’t on the Kneeknacker course, but it’s the closest to any knee pain I’ve had this spring, including race day. It’s hard to make out in the photo, but there’s some blood congealing on my right knee when I scraped through an awkward corner in the pitch below. Climbing was part of my tapering regime, I spent the two weekends prior to the race climbing in the heat, first at Leavenworth in eastern Washington and then another two hot days in Squamish. 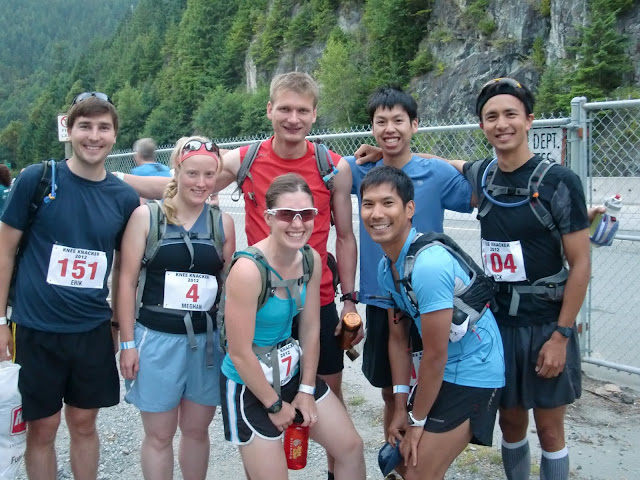 We had an amazing bunch this year. Erik, Meghan, Charlie, Chris, Nick, Mark and I ran the course, while Natalie, Sue, Tim, Krystil, Jeff and Jill did an amazing job of volunteering and cheering us on. Photo by Natalie Stafl. 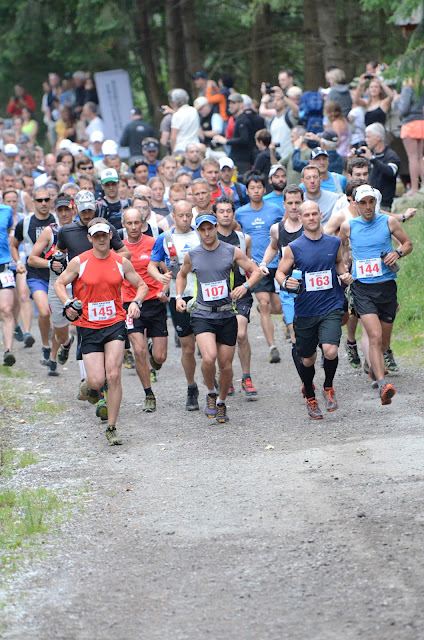 After weeks of anticipation, it begins! Photo by Global Coast Photography.
Chris and I both started off a little too fast. We were way too excited. Chris could barely keep his heart rate under control as we ran through the trails in Nelson Creek. leading to the long climb up Black Mountain. This is my favourite part of the entire course, I like hiking uphill. I dread the flat sections where I actually have to try to run. 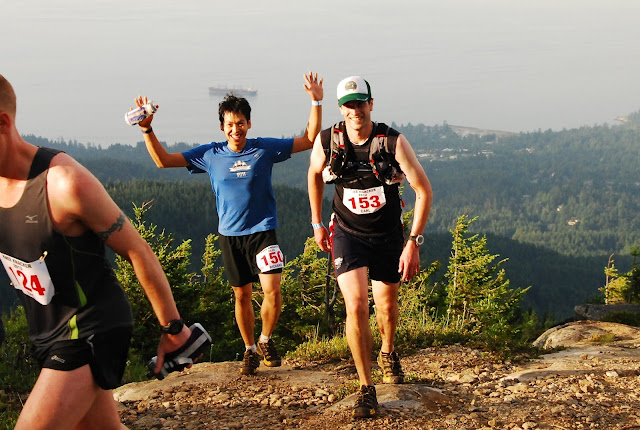 Topping out on Eagle Bluffs, with the fantastic view of English Bay below. From here, the trail climbs a bit further to the top of Black Mountain before descending down to the Cypress ski area. Photo by Karen Chow.

It was great to see Jeff, Natalie and Sue at Cypress who were cheering everybody on. Thanks for the chocolate! I missed it, but Natalie was cheering and jumping so much when Mark ran pass, that her hat fell off. The descent down the Hollyburn Chute and then across the British Properties felt fantastic. I had a good idea of this section after many Wednesday night training runs here. Over the last two months, I’ve joined a group of runners at the informal training runs starting from Cleveland Dam. This was a great way to explore some trails I wouldn’t otherwise run. 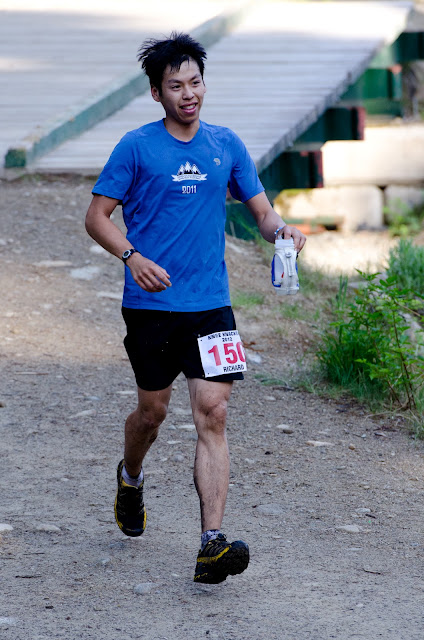 Running past the Hollyburn Lodge. Last year, there was so much snow left on the trails that the course was diverted onto the cross country ski trails. This year, most of the snow had melted making for easier running. Photo by Global Coast Photography. 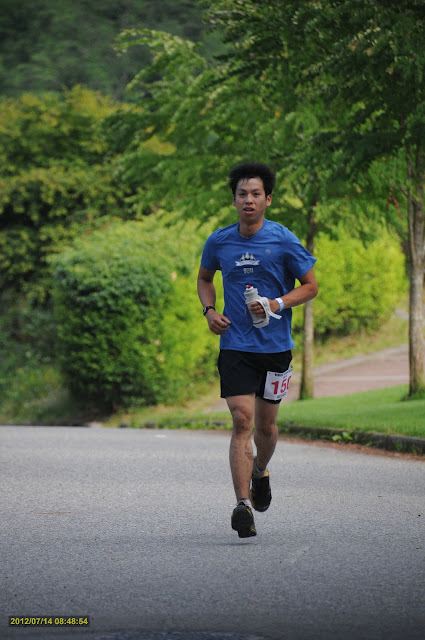 Flat running on pavement. This part of the course is so difficult. Photo by VFK.

Every step felt great, and I didn’t get lost this time, I had already made all the wrong turns during those earlier runs. When I looked at my watch at Cleveland Dam, I was little bit surprised with a split of 2:48. I ran pass Tim, who was volunteering at a traffic marshall on Nancy Green Way, and mentioned to him that I was running way too fast. The crash and burn was slowing unfolding. I walked most of the way up Nancy Green Way, somewhat surprised that I couldn’t see anybody ahead of me, or below and wondered when I would see Chris and Nick. I didn’t see another person until Mosquito Creek, when I passed a runner who was suffering from cramps. I tripped while running across the rooty sidehill and tweaked my right calf, but it felt fine so I continue on, hopping that it wouldn’t bother me any further. 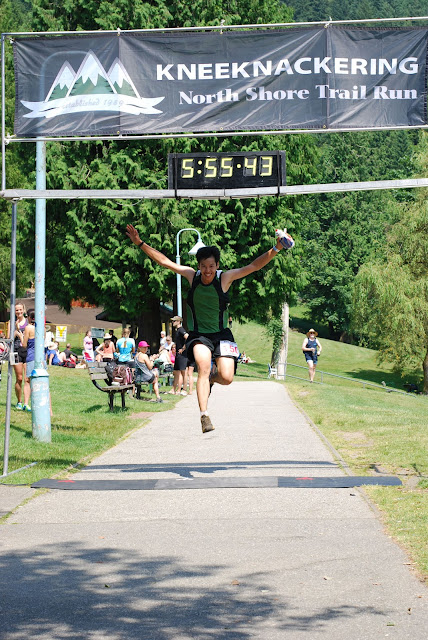 Finish! Photo by Carole Browne.
The last quarter of the course, from Lynn Valley to Deep Cove was a struggle for me, as it was for most other runners that day. For those interested, Chris crunched the numbers, which showed that the median difference between the second and first halves was 13min20s (6%) in 2011 in contrast to 27min16s (13%) in 2012. Last year, I ran with a negative split of -26min50s, compared to a positive split of 18min55s this year. The conditions were not particularly hot, but it was humid through the forest, leading to cramps and a large number of people dropping out. The last hurdle of the course is the climb up the Seymour Grind. This wasn’t so bad, but the flat sections leading up to it, and the long downhill kamikaze run afterwards were taxing on the already sore and immobile legs. 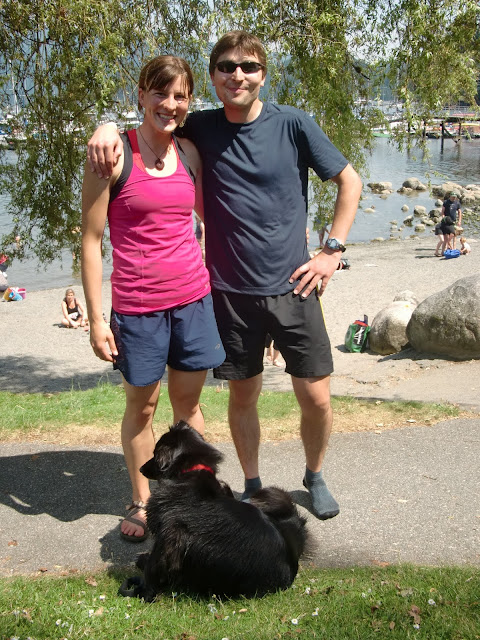 Natalie and Erik. This was Erik’s longest run ever! Erik enjoyed the flats way more than the hills and roots. 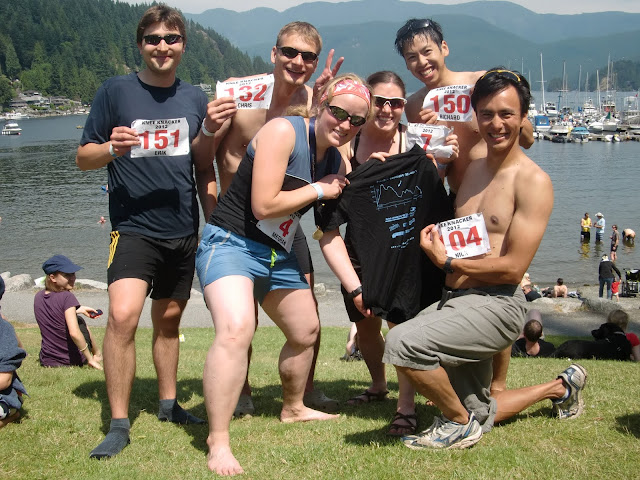 Happy finishers at Deep Cove. We can’t wait till next year! Photo by Natalie Stafl. And finally, a recovery swim in English Bay. Photo by Justin Barnes.

Always a good time on the classic Markhor Needle t

Fat and light bake-packing this past weekend, enjo

One week post Fat Dog 120, the longest I've ever s

Alex and Maddy 2022, Part 1 of the wedding celebra