Hart and Dain-Owens Blaze Through Squamish

Over the last few days, the Canadian-American duo Sarah Hart and Susie Dain-Owens have pulled off the Squamish Double-Double with their recent link up of Banana Peel and Over the Rainbow on the northwest face of the Apron (30,000 cm), nearly in a single twenty-four window. The duo has pursued this highly coveted link-up for several years, but torrential rains have thwarted multiple attempts. In total their feat involved 60,000 vertical centimetres of free climbing over millions of granite crystals. The pair estimated that they climbed the link-up in six pitches, with extensive simul-climbing and walking between pitches.

Hart and Dain-Owens began climbing at 7:30 p.m. on June 8 at the base of the Stawamus Chief, summiting the Banana Peel Route (5.16/2) one hour later. The party took advantage of the unseasonably cool conditions to cover the large amount of technical terrain on this slabby test-piece. They then went to bed and woke up to a house devoid of coffee or cream. This minor setback was overcomed with a visit to the Squamish Farmer’s Market, where the team re-fueled with locally baked pastries. After top-roping a few more steep crack lines in Murrin Park, they drove to the base of the Apron. They began climbing the route Over the Rainbow (5.14-5) at 6:00 p.m. on June 9, passing a party enroute, and then summiting and completing the linkup at 7:30 p.m. that day. “My foot flew out just as I dyno’ed to the crimp – luckily Sarah ‘my down jacket stuffs down into a silver tube’ Hart was above me, shouting beta so I could get the redpoint on TR!,” Susie said. Echos resembling hyenas laughing could be heard through the valley as they neared the summit. “It was incredible to summit the Apron, it was so radical. It was a pretty sweet line that we took,” Hart writes.

The team is now resting at base camp, waiting for another weather window before attempting their next objective. Stay tuned. 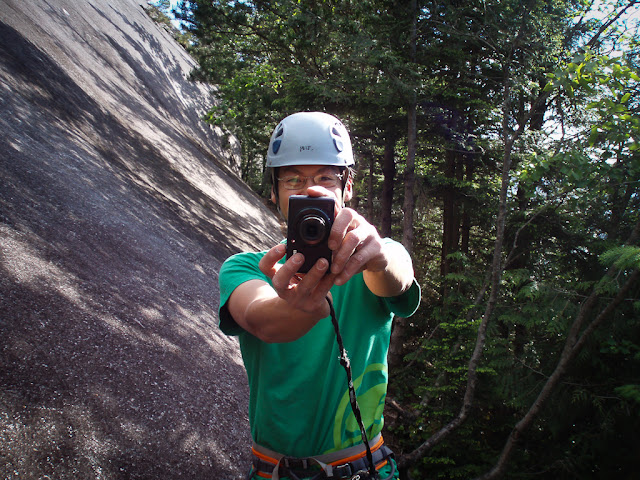 Every expedition needs a photographer.  However, Rich “I’m So Scared” So was unable to keep up with the Hart-Dain Owens duo, and was left behind at the bottom. Photo by Sarah Hart. 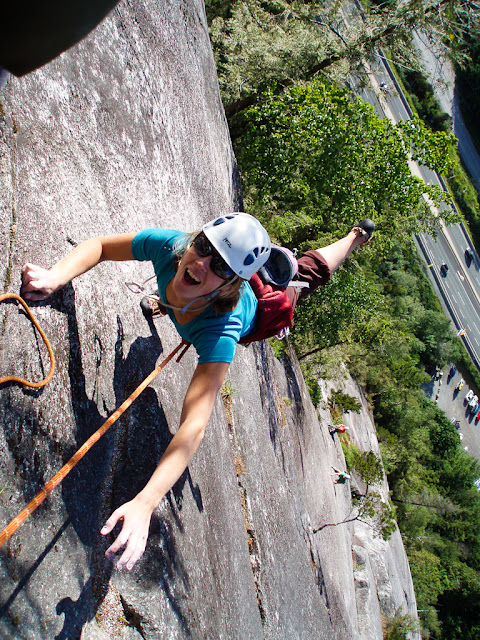 Dynos for dinner! Susie Dain-Owens stylin’ yet another pitch during her free ascent of Over the Rainbow, Apron, Squamish, BC. Photo by Sarah Hart. 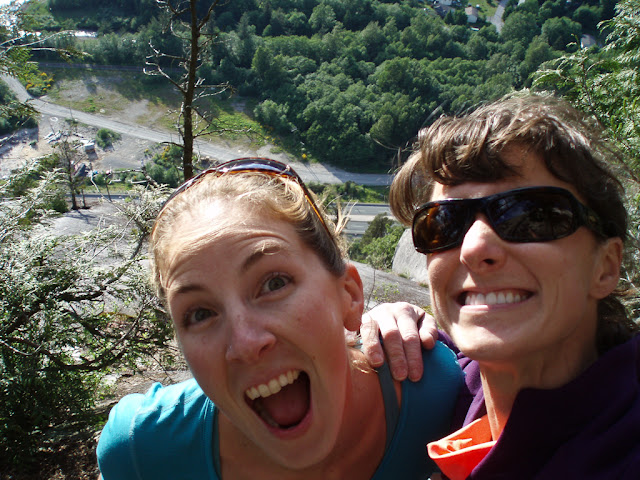 Summit of the Apron. The team descended back to sea level in under thirty minutes. Photo by Sarah Hart.