With the recent cold snap in Vancouver, ice conditions were looking really good in Squamish.

After skiing at Brohm ridge with less than spectacular snow, Pete, Kristen, Sarah and I decided to go and check out some of the iceclimbing around the Smoke Bluffs. People were saying that the bluffs had more ice than they have had in decades. Since none of us had done any “real” iceclimbing, we figured TRing ice routes in the bluffs would be quite safe. Short drive, easy approaches, no avalanches, minimal icefall, and nearby Pub sounded quite good.

Getting out of Vancouver on Sunday morning was quite difficult. In fact, we didn’t leave until 11am since we couldn’t figure out if it was worth driving all the way to Squamish in the blizzard. Afterall, it’s just iceclimbing, not powder skiing on the Duffy. This didn’t give alot of daylight for climbing, as it was also the winter solstice. The highway crew did a great job of keeping the highway clear, and soon we were putting on our boots. Well everybody except for Pete, who had left his boots back in Vancouver. Fortunately Kelly Franz was home, and lent Pete one of his five pairs of boots.

We walked up to the Bughouse heights area (left of the fixed route at Penny Lane), saw some nice ice smears, but there were already people on it. We eventually found a short smear of ice on the right side of Krack rock. It was probably only 3-5m high, but long enough for us to figure out that ice climbing is scary.

The next and last climb we did that day was a longer full pitch of ice on the left side of Krack rock. Take a 35m rope to toprope this one. Swing swing kick kick. A fair bit of video footage was taken here, so look forward to seeing Sessions Vol 2: Return of the Ice Devil.

The next day, Pete and I went back to the Smoke Bluffs for some more ice cragging. It was a bluebird Monday, and Pete the working man was feeling “sick.” There was some ice above Krack rock, but we couldn’t figure out how to walk to the top so we left that alone. We went back to the Bughouse heights area, where we enjoyed a few pitches of warm sunny iceclimbing.

Next we went to check out Alice on Ice. This was a fun ice route to the right of Zombie Roof. Once again the climbing was quite fun and comfortable with sunny belays. After a few more laps here, we figured it was time to go home. 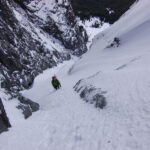