On Saturday, CJ and I went for a solid coastal workout in the Wedgemount Lake area, starting right off the highway, climbing up to Wedgemount Lake, and then poking around in the peaks beyond. My last trip in this area was on the Blackcomb-Currie traverse with Bram in 2013, and we just skied through the area. I wanted to get some solid vertical in, and CJ was keen to check out a new place in the Coast Mountains.

I left North Vancouver at 4:30 am, drove up to Squamish to meet CJ and we were leaving the parking area at the start of the Wedgemount Lake road (road is not plowed) by 7 am. The high pressure that had been sitting on the south coast for the past few days, leaving my Facebook feed filled with bluebird powder shots was quickly falling apart today as the next system pushed through. The Whistler alpine forecast called for 2200m freezing levels, cloudy with sunny breaks, and southerly winds up to 40km/h. We climbed quickly up through the variable snow, the typical Coastal forest snot, starting from 600m up to the Wedgemount Lake Hut at 1950m. I’ve been recovering from a cold, so I starting to feel the burn after the 2.5-hour climb.

There were two other people staying at the cabin, who had been dropped off outside the park boundary near Mount Cook, and skied some of the steeper lines in the area over the past two days. This seems like a fairly common thing to do, to avoid the steep climb in the winter. It’s not like it’s bushy or anything, just more calories burnt by hiking up. It’s actually a very efficient climb up. The goal of today was to get in better shape, and there’s no workout like a steep grunt through the forest from the valley bottom. The only other time that I’ve skied with CJ was another classic Coastal trip, a slog up to Cloudburst Mountain in less than ideal conditions, so he had an idea of what today might turn into.

There’s a ton of great skiing in this area.

We took a look at the Rethel couloir, noting the large cornice near the top, and the wind effected snow in the lower apron. It was warm and cold at the same time, warm from moving quickly in the sun, but once the wind picked up, I started to get a chill. We dropped down to the lake, and over towards the toe of the Wedgemount Glacier, with blue ice showing at the ice bulge beyond the lake. We roped up and headed up the glacier, working our way up to Wedge-Parkhurst col. We stopped for a snack at the col, hoping the sunshine would warm us up here. Unfortunately, the wind just picked up, and we crossed the wind-stripped rocky slopes over towards the base of the Wedge Couloir. The snow changed from a 10cm breakable solar crust to a firm wind pressed texture at the base of the couloir. Looking up, I could see the crown of a Size 2, with hangfire lingering below the cornice at the top. From the bottom, it looked like was 75m wide, 20cm deep, and on the skiers left side of the line. We considered our options, dug a hasty pit which showed moderate shears, and decided to back away and save the line for another trip. There were reports of strong northerly outflow winds on Thursday morning which would have cross-loaded the northwest facing slope. It’s nice to be able to make decisions like these and to be on the same page when travelling in the mountains.

We headed back across to the Wedgemount-Parkhurst col, and decided to take a look at the Parkhurst Couloir – narrower, steeper and a more northerly aspect. We caught up to the two other skier/splitboarder on the wind stripped summit, with the large summit cairn fully visible. This area gets a ton of wind! The other party checked out the entrance to the couloir on belay, aware of the large cornices up here. There was no cornice on the right side of the line. CJ and I watched from this safe stance, while the two others dropped into the line, skirting a steep rocky entrance below the cornice. It wasn’t the prettiest descent for me. For one, I haven’t skied a lot of firm snow at that angle this season. I made cautious turns down towards the mid-way choke, watching as the upper 10cm wind crust broke off and cascaded down the gut of the mountain. The snow was variable, with firm patches followed by soft patches. It was nice to go 3rd, as the first two descents had exposed some rocks that I could now avoid. I pulled off to the side after the choke and watched as CJ worked his way down. The key was to ski aggressively in this type of snow, but I couldn’t quite bring myself to do that until halfway down after the bend in the couloir.

Today was all about the workout and the gluttony of snacks that come with a solid day in the mountains. We stopped before the final wall above the lake, pulled out a bar of chocolate and ate some sour patch kids and the rest of my calzone and pringles. We skied just the left of the couloir leading down to the lake, finding better snow here. We skinned up and crossed the lake, climbing back up towards the hut. The only thing left now was the classic ski descent to the valley bottom, nearly 1200m of coastal schmoo. The steep section below the lake was a mix of dodging snowballs in the pinwheel alley and some creamy stuff. While the snow was terrible in the forest for turns, I didn’t mind too much. It was fun to just cruise down through the big trees, sideslipping in one direction and staring at all the lichen and moss, stopping to do a kick turn in the skin track and then gliding down in the other direction to the next skin track corner. I’m such a badass skier. We were back at the car by 5 pm, after a very pleasant day out.

Didn’t get the Wedgie today, but it was a nice walk in the Park. 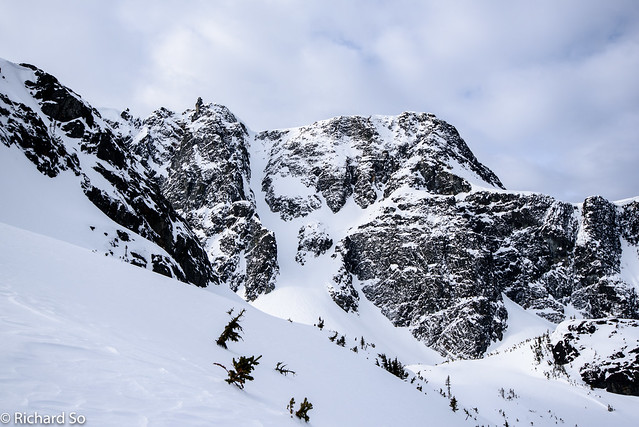 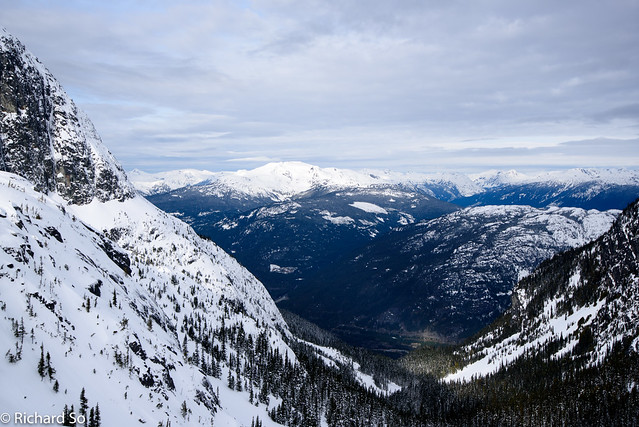 Looking across the valley towards Rainbow. I thought I could see some debris off the east glacier. Turns out it was a Na 2.5 off the east ridge 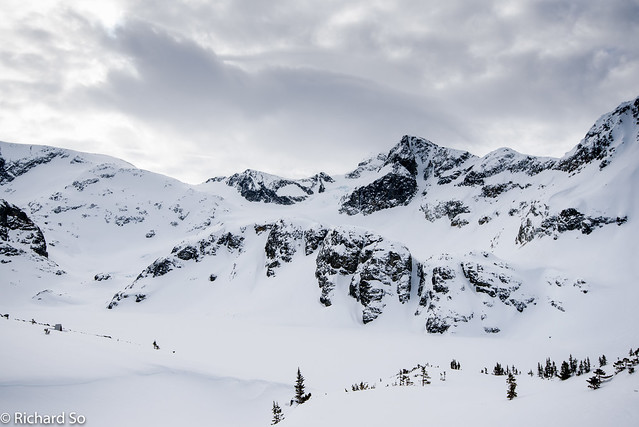 Looking up at the Parkhurst Couloir on the north face of Parkhurst Mountain, with the “Wedgemount Lake Wall” below 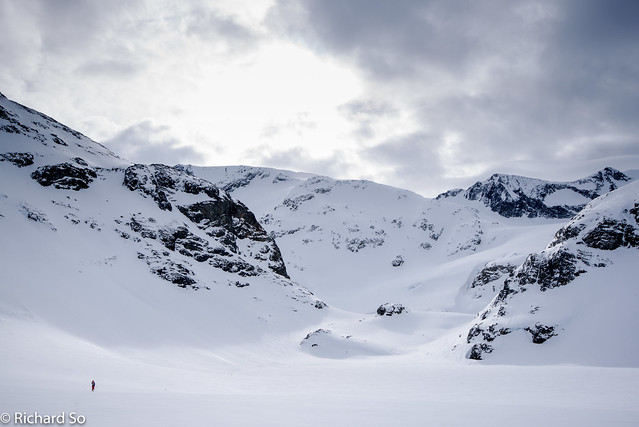 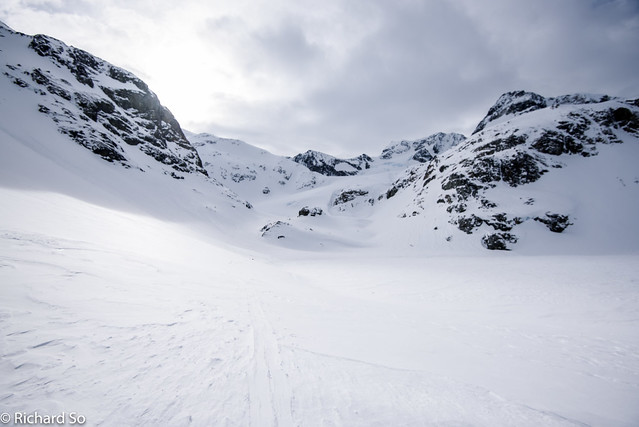 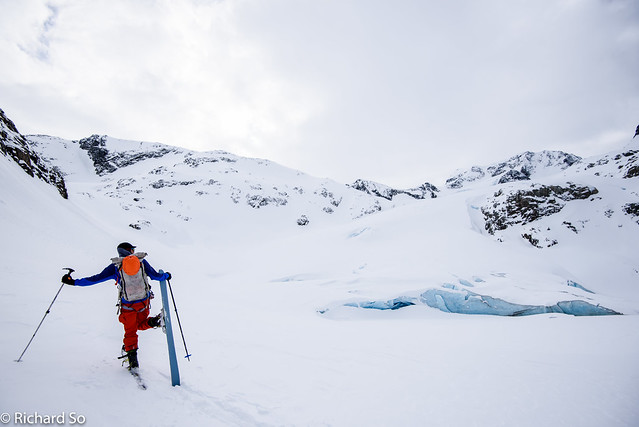 Leg stretching in front of the blue ice 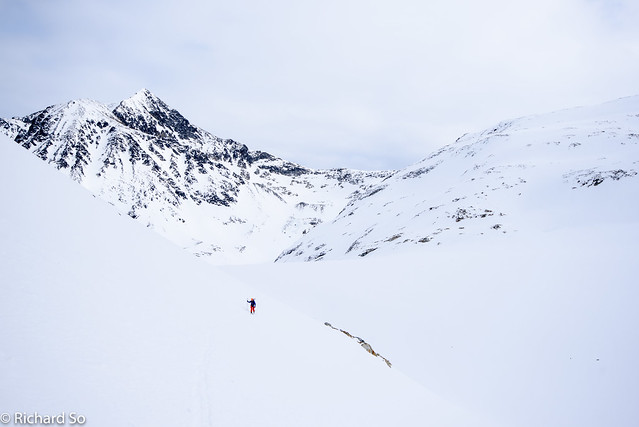 CJ contouring over towards the Wedge-Parkhurst col, with the nice looking south facing slopes of Weart Mountain behind him. Those would be fun ski lines with spring corn. 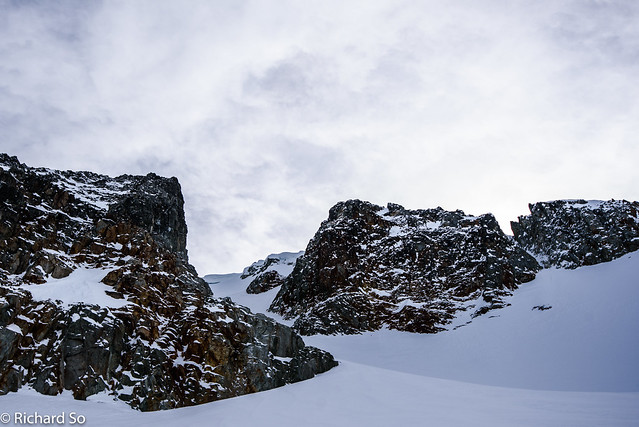 Looking up at the Wedge couloir 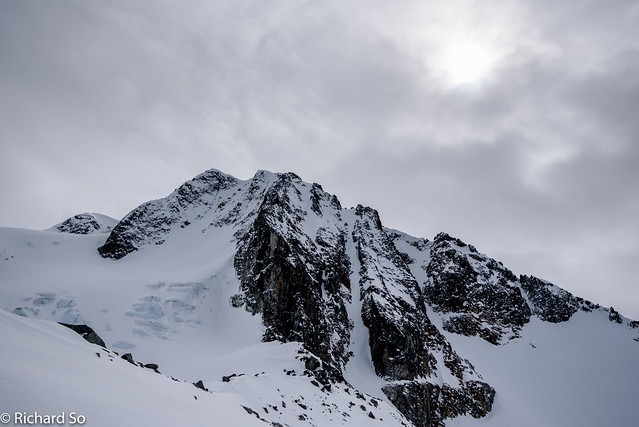 A pinner couloir just to the left of the Wedge Couloir, and the North Couloir to the left above the seracs. 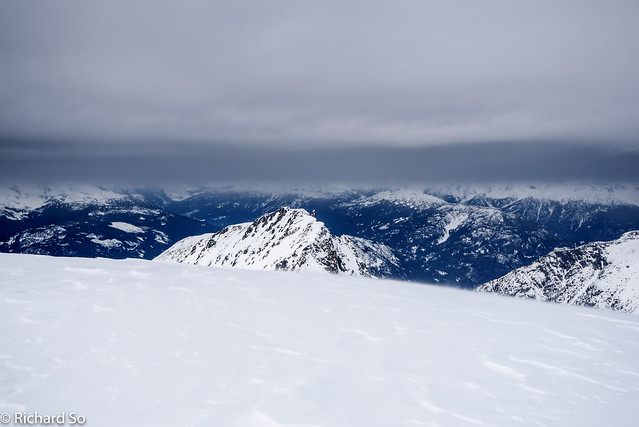 Windy on top of Parkhurst Mountain, with the weather moving in. We experienced gusty conditions all day. 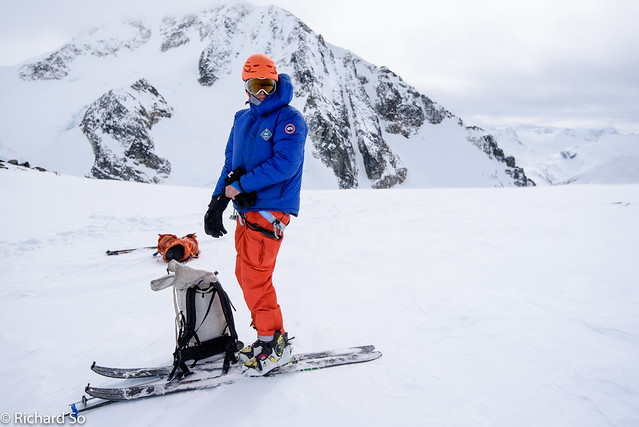 CJ getting ready, trying not to get blown off the top with Wedge Mountain slowly disappearing into the clouds behind. 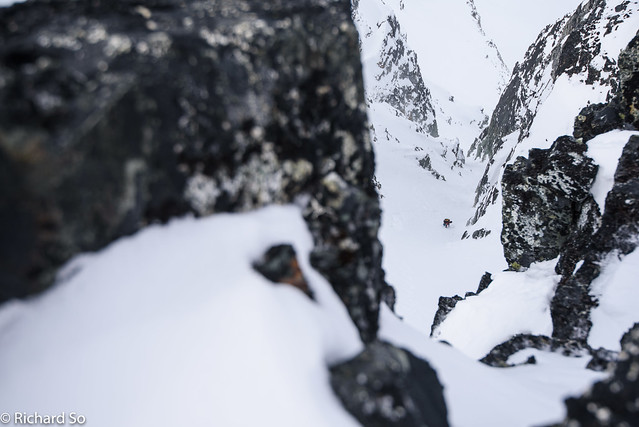 Splitboarder going first down the gut. The couloir narrows and then jogs left at the halfway mark 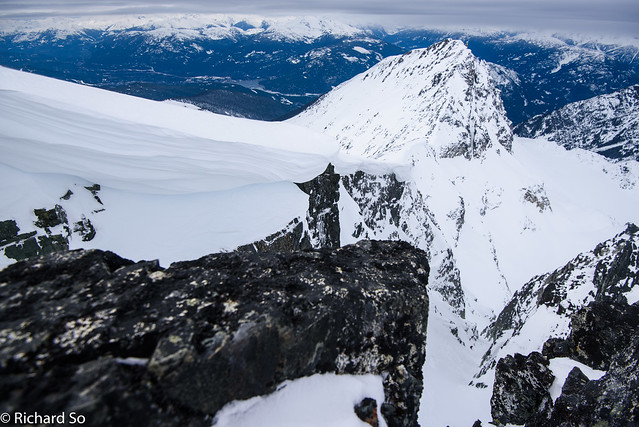 Big cornices and Parkhurst Mountain. Eric/Nick, you guys need to do the triple descent linkup! 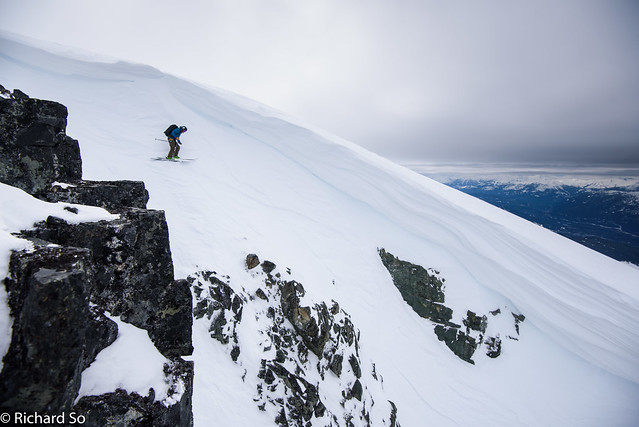 Skier going next, sideslipping down past the rocky entrance. 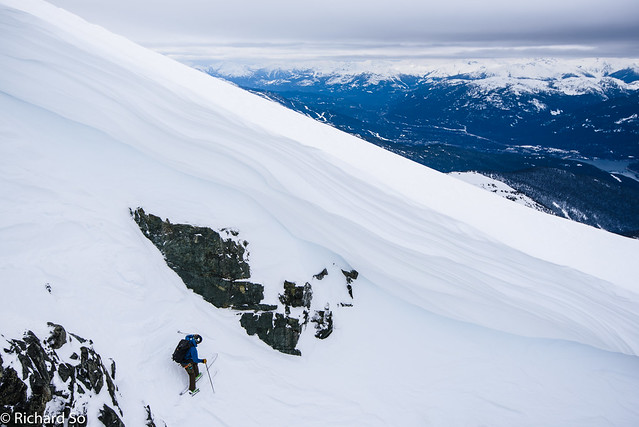 At least, it wasn’t icy, but the snow was funky! 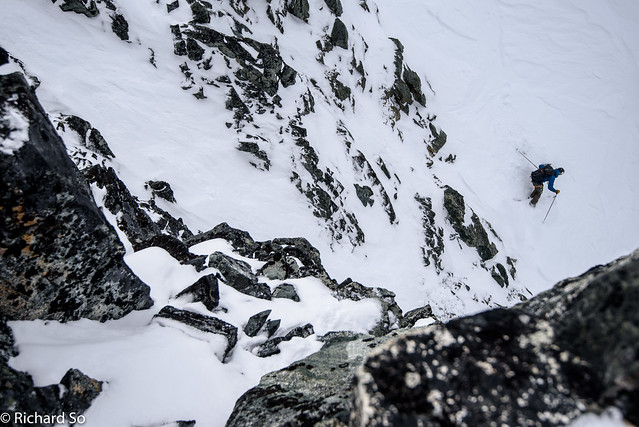 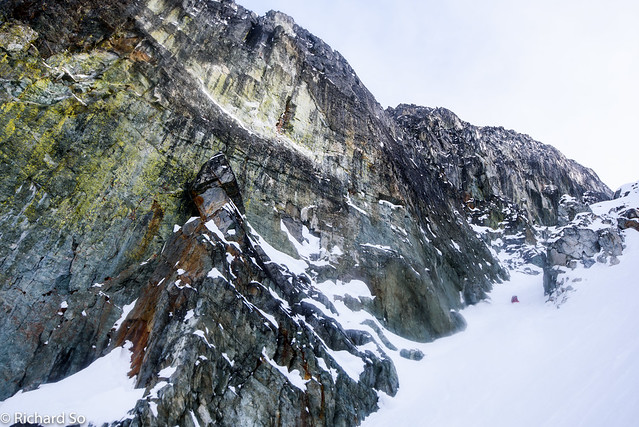 My lens fogged up here, but CJ works his way down through the mid-way narrowing with the big walls of Parkhurst above. 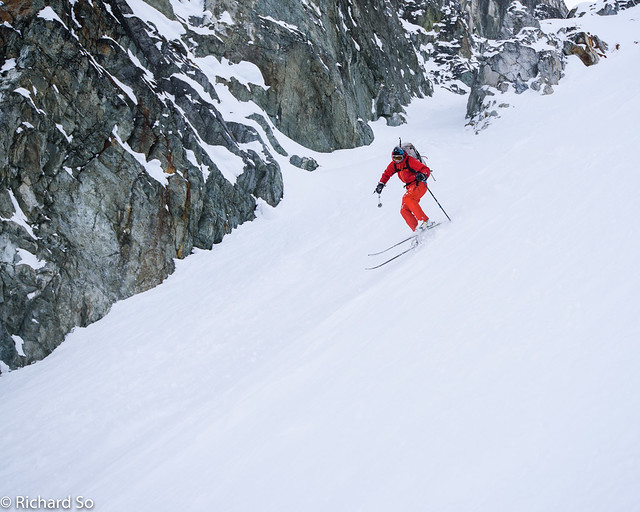 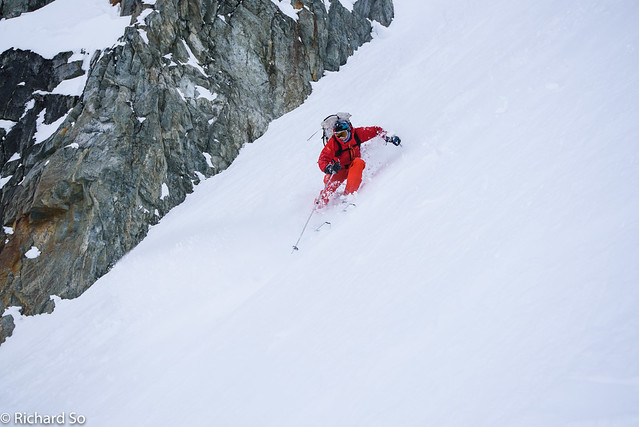 CJ skiing with way better style than I was today. Back-seat leg burner all the way for me. 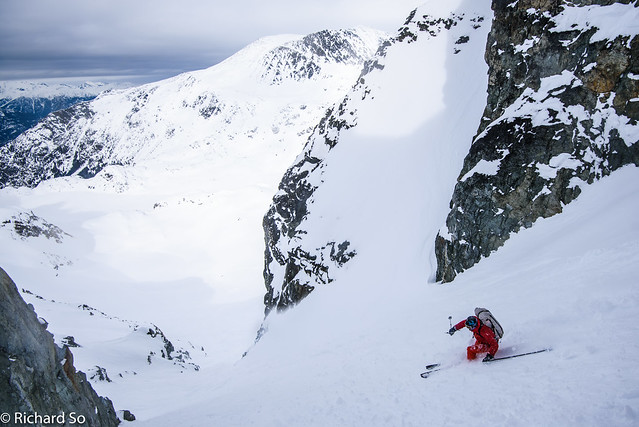 Only halfway down, but the exposure is less now. 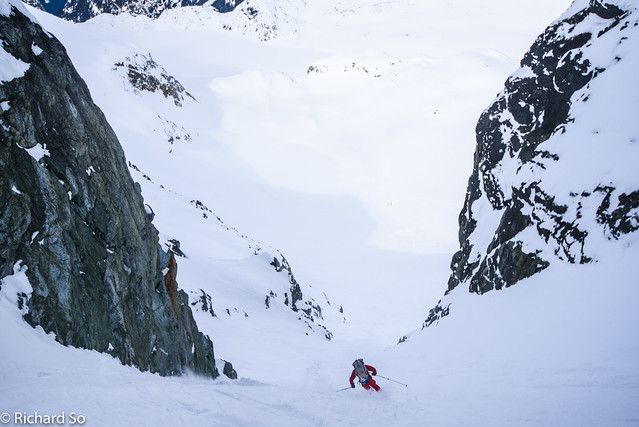 Continuing down the Parkhurst couloir 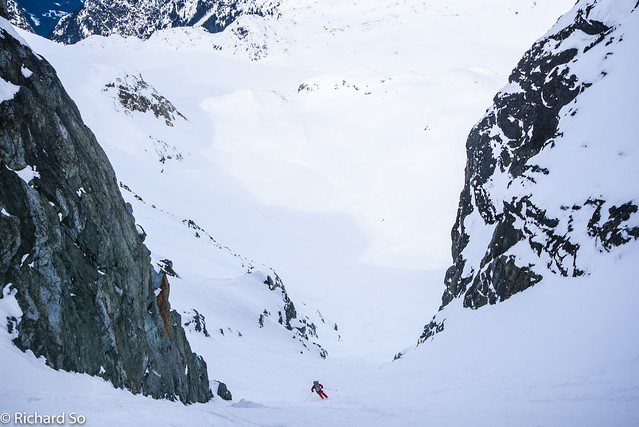 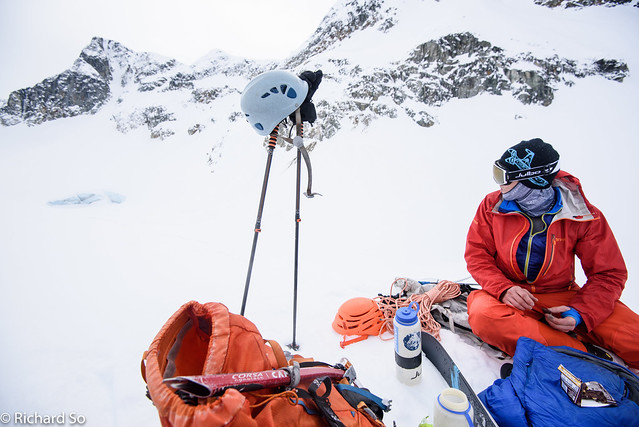 Fatty fitness time, with Team Dynafat. Unfortunately, we were missing the slices of pizza and donuts  here and beers and tortilla chips at the car. Ski tour to eat… 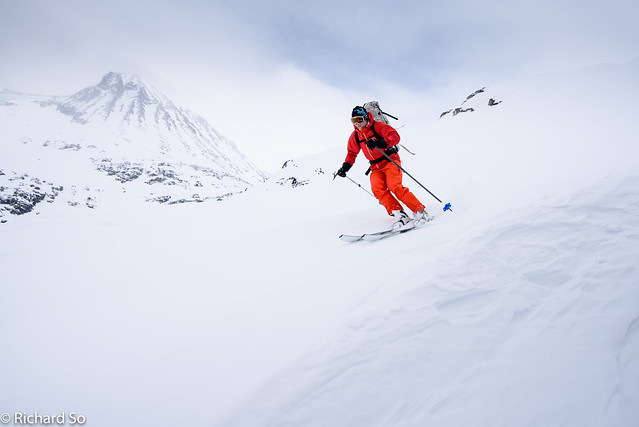 CJ with Mount Weart on the left 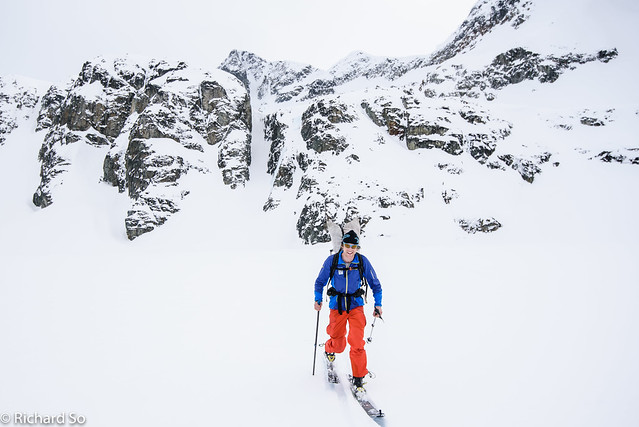 The couloirs lining up 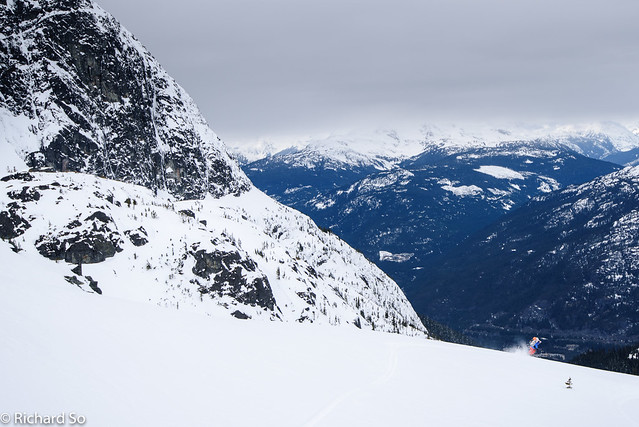 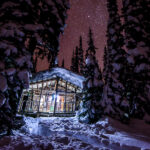 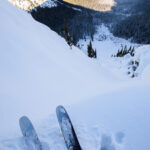