After a long dry summer, the week leading up to the long weekend left a foot of snow in the high mountains, above 2000m. Tyler Nick and I bailed on our 3-day plan. I was scrambling to find a place to go, that had some climbing interest to suit Nick, a place that I hadn’t visited before, and not too high to get into the snow. I stared at my map wall, and remembered Meslilloet Mountain, a big massif far from anywhere, with less visitors than it deserves.

You could spend 3 days exploring the area around Meslilloet, wandering along the granite ridges and finding all the hidden lakes, or planning a more ambitious traverse through the area. This time, it would just be one long day trip, accessed from the north. A 4×4 HC is required for the drive up the Mamquam FSR. It’s a long drive from Squamish, nearly an hour on rough logging roads. The condition of the Mamquam Main deteriorates after passing the Skookum Dam area. The clearance on my Chevy Tracker was the bare minimum to get past the washout at Bridge 5, 25.8km up the Mamquam Main. Beyond this washout, I was able to drive to the S-100 turnoff (27.7km from the highway), and then drove another 1.3km up that branch to a major washout, impassable to all vehicles. Bikes would work well too. The entire Mamquam valley has been logged, with numerous old logging roads branching off from the “main road.”

From the car, we crossing several more eroded sections on the road (impassable by any vehicle). to the start of the bushwhack marked by flagging tape at 4.5km on the S-100. This is just before the clearcut at the end of the road. You want to leave the road, and then headed into the forest, following the flagging tape carefully. The critical part is just above the cutblock, where flagging tape leads to your left, and then back right through a set of bluffs. The goal is to reach the 1320m col to the south, which involves lots of steep blueberry bushes and forested travel, staying to the east of a creek. I had wet feet and hands from the morning dew, maybe 45 minutes of enjoyable bushwhacking.

Now contour south at ~1400m along a heathery bench, on the south side of the 1560m bump to the north. The goal is to reach the lake at 1300m to the east of this summit, travelling through the sub-alpine terrain. This would be a nice campsite by the lake. From the lake, climb up more heather slopes, which soon transition into clean granodiorite slabs and talus leading to the ridge crest. We continued along the crest, going up and over numerous bumps. We were right at the snow line, which made for slow going in the powder covered heather.

The Meslilloet glacier is quite spectacular, especially in it’s late season condition with gaping crevasses. It is the closest glacier to Vancouver, only 38.8km in a straight line from my couch in North Vancouver. The approach is long but it’s worth the effort just for this view. We didn’t get to the climbing part until 8 hours after leaving my house. The east ridge climbs the left hand skyline on solid granite, 3rd to 4th class, with an easier grassy ramp splitting up the scramble. The clouds rolled in on us and it was a wet and slippery ascent with the fresh snow

We sat in the fog on the summit, wondering about the view.  For a brief moment, the clouds parted from the summit, and we caught a brief view of the city to the south. The forecast was spot on, with the afternoon summit whiteout. On the way back, we stayed to the west of the 1900m summit north of Meslillooet, contouring along open granite slabs and talus to the 1660m col. We worked our way back along the ridge to the lake, bushwhacking when necessary. I really wanted to go for a swim in the lake, but it was getting cloudy and late in the day. I’m sure it was nice and warm in the lake, as all BC lakes are.

Don’t go north from the lake and drop down directly into the valley where S-100 is. It leads into very steep and unpleasant bushwhacking, on 45 degree blueberry slopes. Instead, retrace your steps, and contour back around the 1560m to the col. I may have sandbagged Tyler about the terrain on this trip. I told him that it would be a nice walk in the alpine, with some blueberry slopes along the way. I also thought we could jog some of the terrain, and we convinced him to bring his runners instead of his hikers. Nick and I had trail runners, but I didn’t realize Tyler’s runners were basically racing flats, without any traction for the slippery heather slopes. On the way down, I would hear Tyler crashing every 50m, regretting his decision to listen to us!

It wouldn’t take much to clear some of the bush, and make this into a trail. I’m not sure if it’s worth the effort, given the deteriorating access along S-100, and the end of Mamquam Main. We were back at the car by 7pm, a nice 11.5 hour day. This is one of those places that you should go and visit soon, before the access becomes harder. 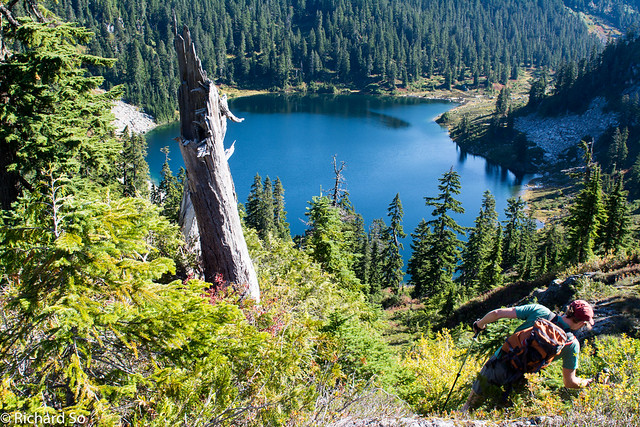 Descending down to the lake at 1320m 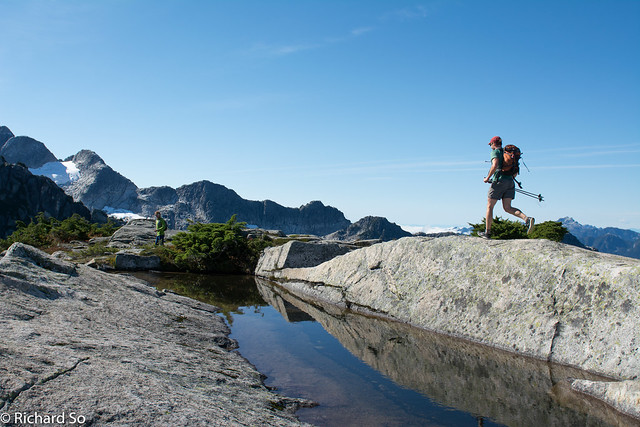 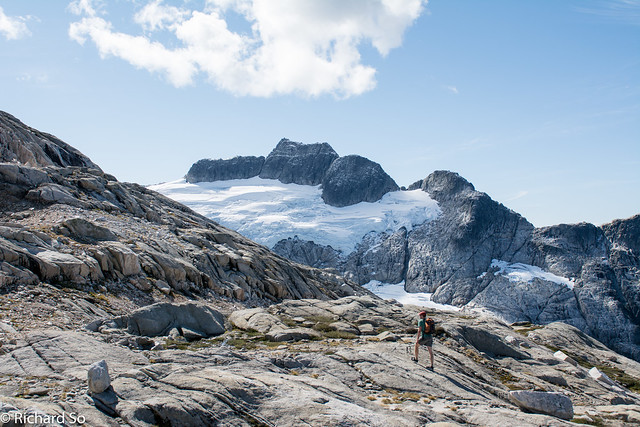 A good view of the north face of Mesilllooet Mountain 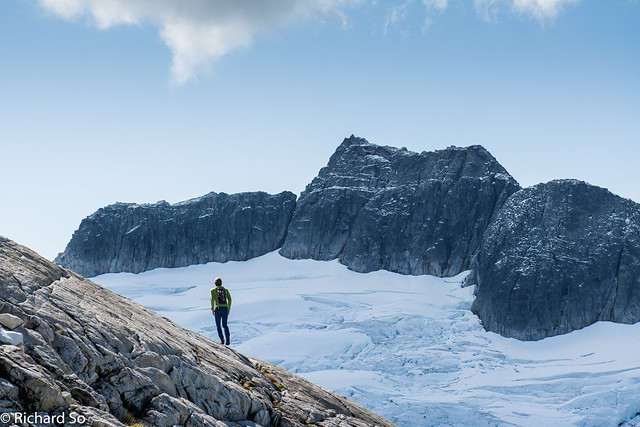 Our route follows the rocky ridge around the glacier, and then up the left skyline 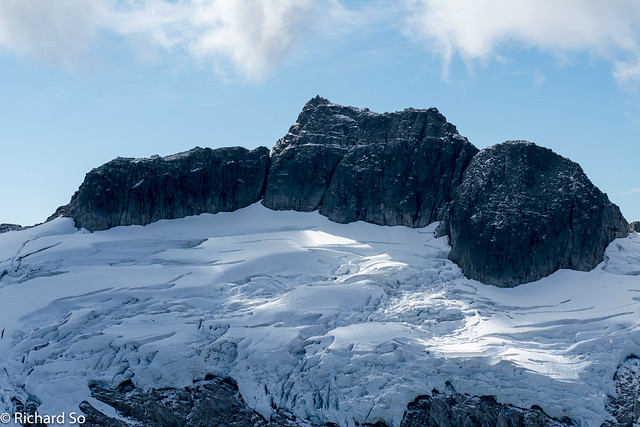 Mesillooet Mountain with the first snowfall of the season 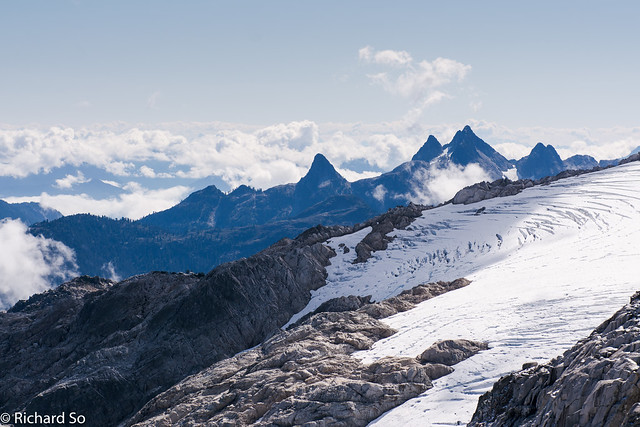 The Five Fingers Group on the Pitt-Coquitlam divide 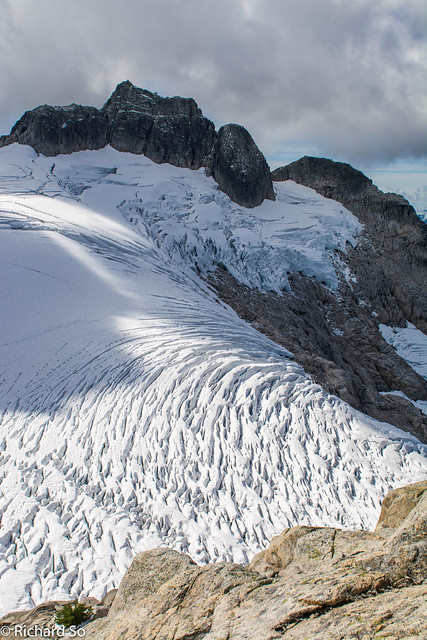 The closest glacier to Vancouver 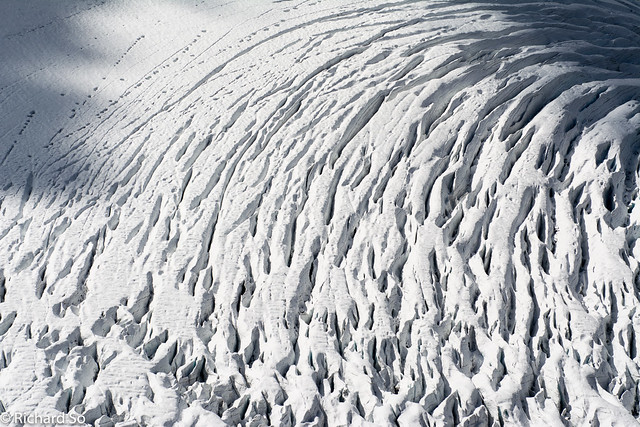 Gaping crevasses on the Meslillooet Glacier 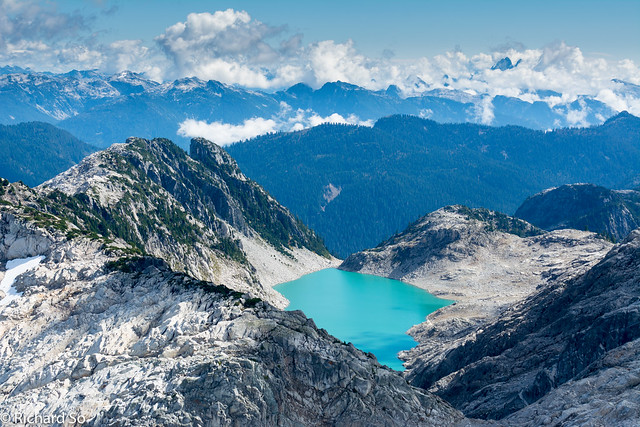 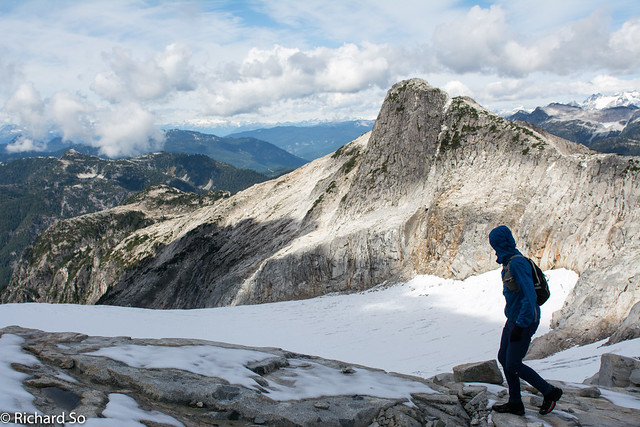 On the way back, we contoured around this peak 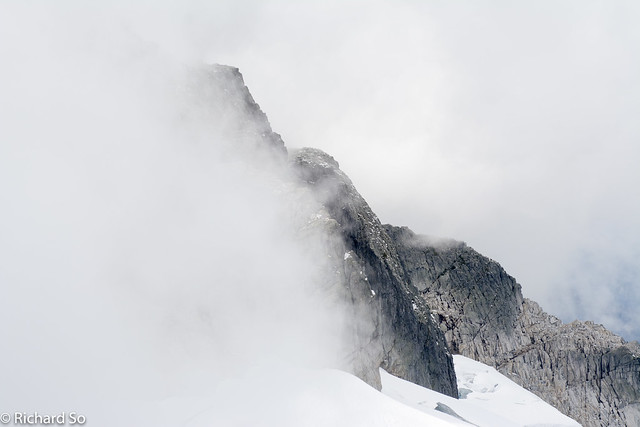 Incoming clouds. This peak seems to attract the weather. There were only high clouds in Vancouver that day, and it was clear in the Sea to Sky area that day. 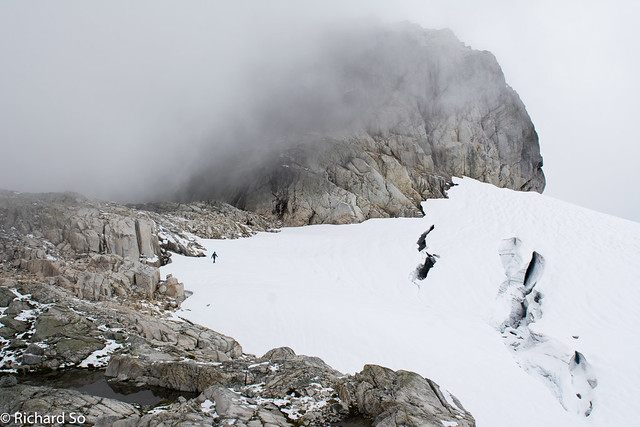 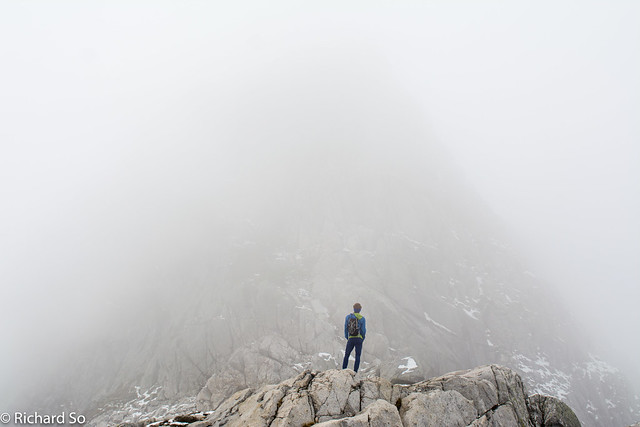 The summit disappearing in the fog 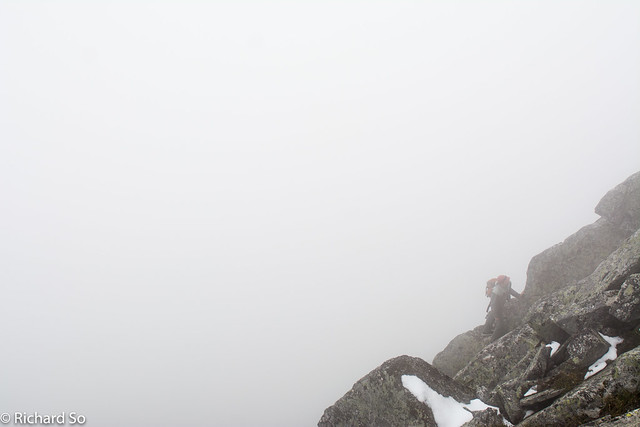 Tyler scrambling up to the summit 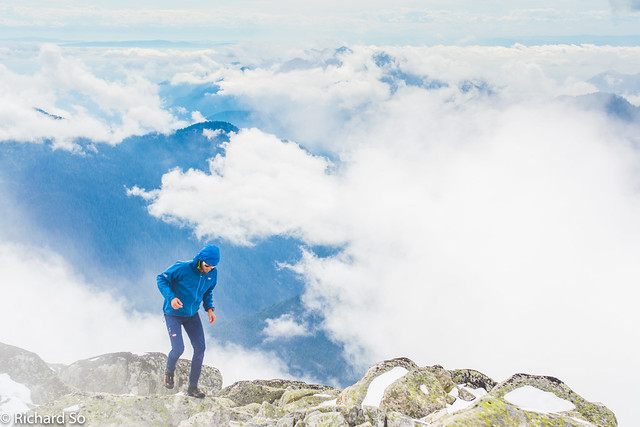 Life in the clouds, with Vancouver behind Nick somewhere below 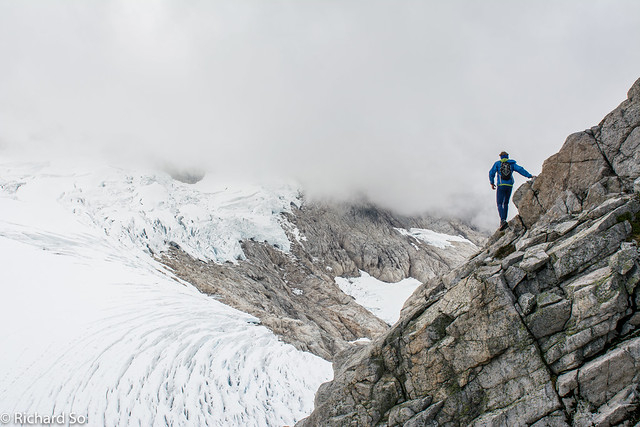 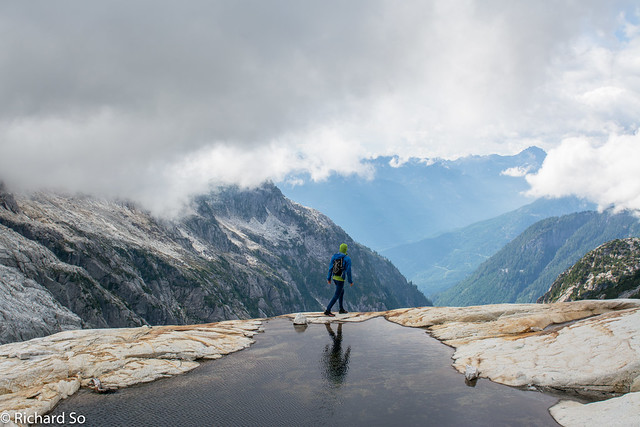 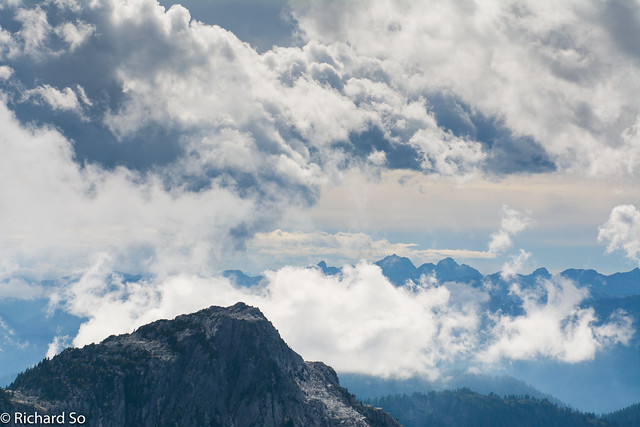 We had some interesting views of familiar mountains, from an uncommon perspective. Way in the distance are the Howe Sound Crest peaks, The Lions, Brunswick and Hanover. 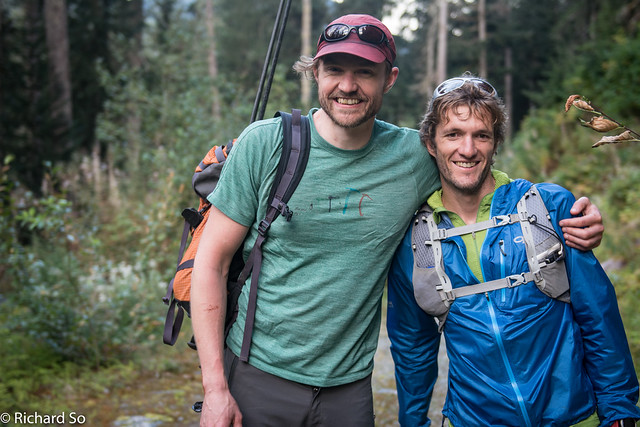 Awesome day with these two guys! 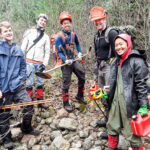 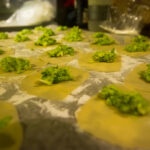