Skip to content
Just east of Pemberton, the Lizzie Lake region is an extensive alpine collection of lakes, meadows and gentle summits, suitable for hiking and ski touring. More remote than the Duffey, it sees far fewer visitors each year. It’s also the western entrance to the classic Stein Valley traverse, a rugged backpacking route that usually takes 6-10 days for most parties. 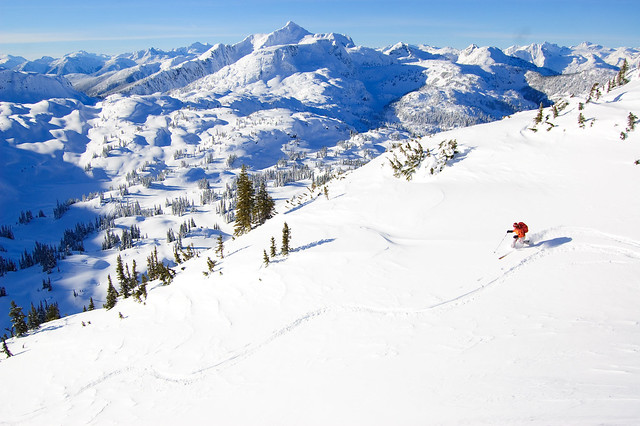 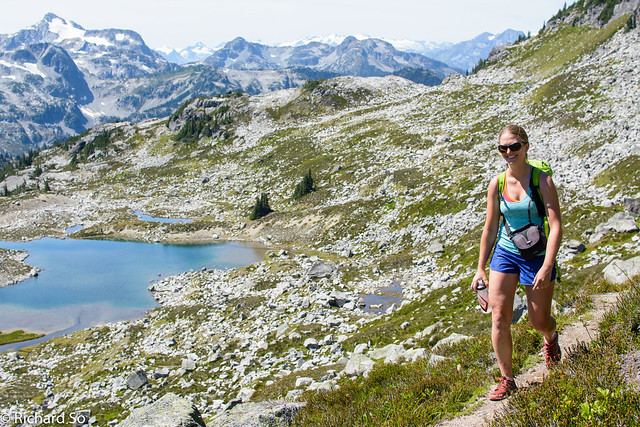 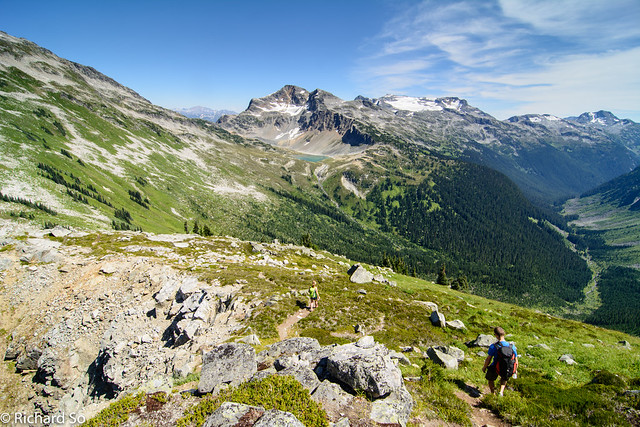 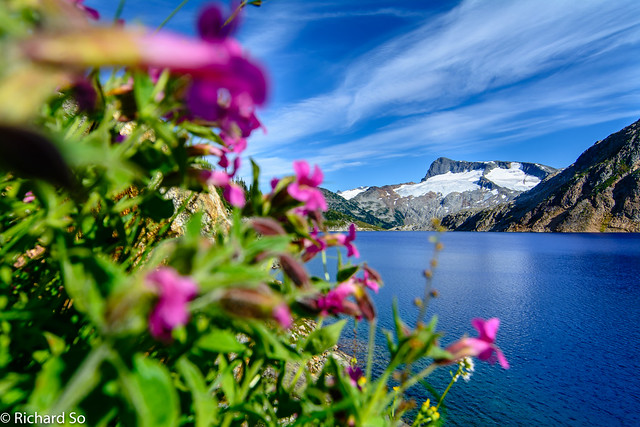 In 2003, a major washout occurred on the Lizzie Lake Road. This was before my obsession with the mountains, so I never had a chance to drive up this 10km road to Lizzie Lake back in the day. There was little interest from Interfor to fix the washout, as there is not a lot of merchantable wood left in Lizzie Creek. I believe there were plans to repair the washout in 2008, but nothing has happened. Instead, the best access is to either ford the creek in low-flow (winter), or take the bypass trail which contours through the forest above the washout. The BC Parks website describes the road as follows:

Lizzie Lake Forest Service Road blocked by 4 slides, the first of which is approx. 1 km from Lillooet Lake. The road and bridges are damaged in numerous locations; no vehicle access is possible. Lizzie Lake is approximately 10 km from the first washout. About a 12 km hike from Lizzie Lake to the park boundary during normal mid to late summer conditions (approx. 700 meters net elevation gain from parking lot at Lizzie Lake to park boundary). The road is becoming overgrown. Route finding is difficult at the beginning of the trail.
The Varsity Outdoor Club organized a trail work party in July 2010, and were able to clear the road, good enough for walking without having alder slapping into your face on every step. They had also reinforced the centre beam of the cabin with some steel brackets.
In December 2010, I spent six days skiing up around the Lizzie Cabin, my first trip to the area. We crossed the washout, each foot in a garbage bag and sandals, and then trashed our way through the snowy alder covered road. The weight of the snow bent the alder into the road, forming a snowy alder tunnel. It took us over 8-9 hours to get to the cabin, arriving in the dark. 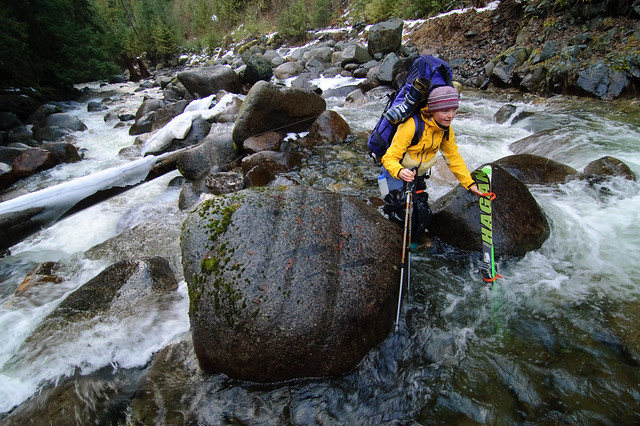 This past summer, August 2015, I went back for another visit, hiking in the Stein Valley from Lillooet Lake to Blowdown Pass. We took the bypass trail, cruised up the relatively open first 5km of the road, crossed a log at Km 5 across the East Fork of Lizzie Creek, and then entered the full on, in your face, no view, alder tunnel that is the last 5km as the road climbs up to the lake. Despite this, with light packs, we were able to get to the lake in two hours of fast walking. There used to be a parking lot here, now lost in the alder jungle. Even the BC Parks sign for the Stein Valley, is mostly obscured by the bush.
I’ve been talking with some friends about clearing this trail, and since the skiing is hit and miss in November, I tried to coordinate a work party with the VOC again, on November 14-15. This was suppose to be the shoulder season. This trip was also posted on the BCMC trip calendar, a good thing as it caught the attention of my friend Jason, who had an equal desire to clear the road, but also with the power tools to carry it out. 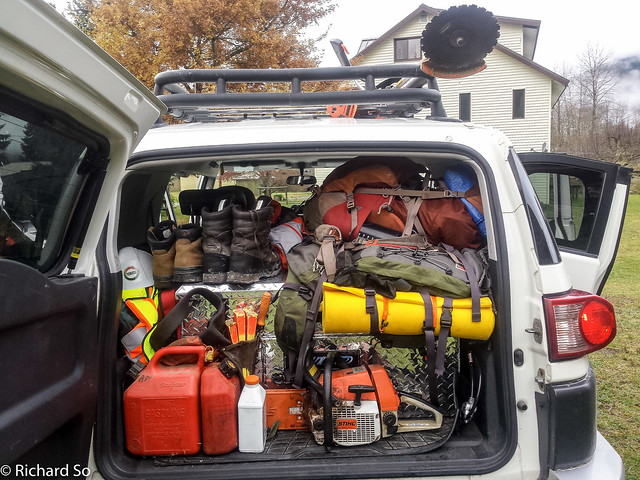 Early Saturday morning, Jason Michael and I left Vancouver, and drove up to Pemberton to pick up a chain saw, brushcutter fitted with a circular blade, and a set of loppers. We drove through Mount Currie, and then 15km down the In-Shuck-Ch/Lillooet Lake Branch FSR to the Lizzie Branch FSR. Continue up the road, and then left up the hill to the first corner. This is where the bypass trail begins. There was only one other car here, and I wondered where the other car of VOCers were. It turns out they had driven higher up on the road, finding another trail leading above the washout, possibly less enjoyable than the lower one. 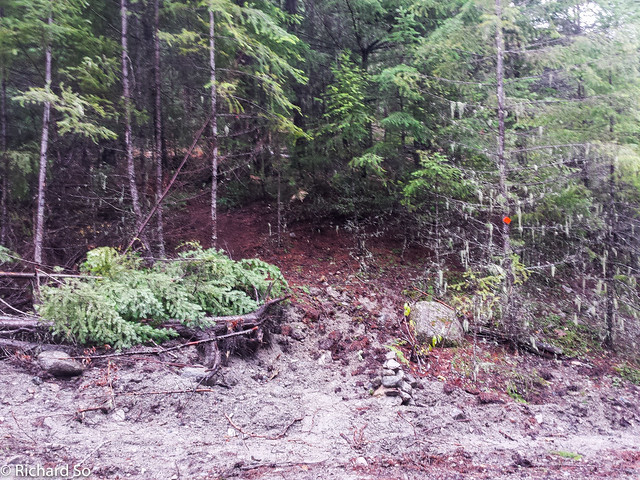 Start of the trail, marked by cairn and a new trail marker. 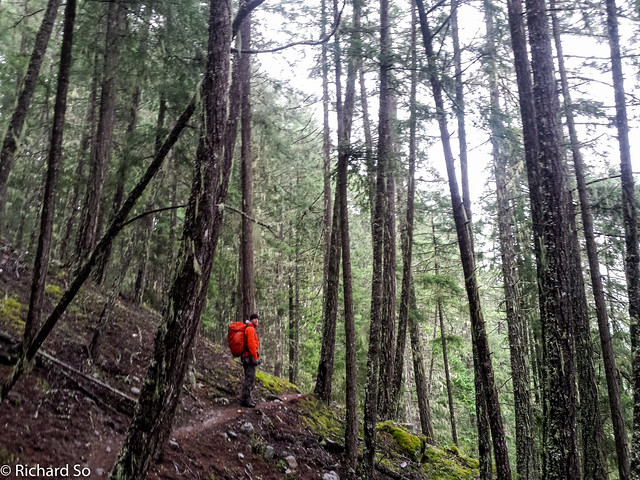 Bypass trail
I discovered that it’s quite awkward carrying around a brushcutter, as we contoured in forest, with views of the misty treetops. We dropped down around 50m down to the road. Less than a kilometre up the road, we saw Roland walking down the trail, with his hand wrapped up in an abdominal bandage. He had taken a tumble on the road, slicing up his hand. It needed 7 stitches for the 3cm cut, which went down to the tendon. 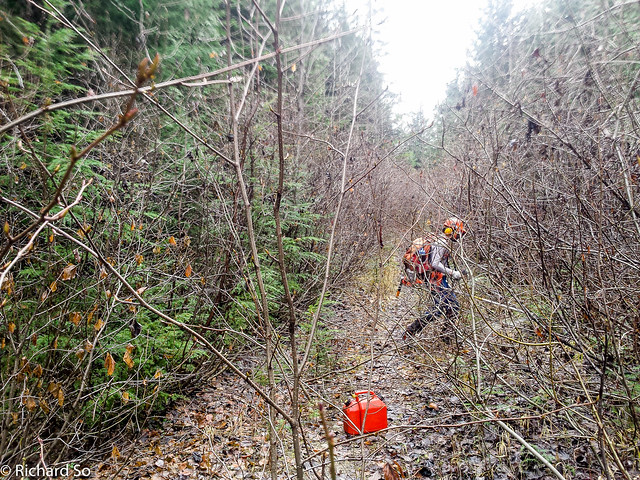 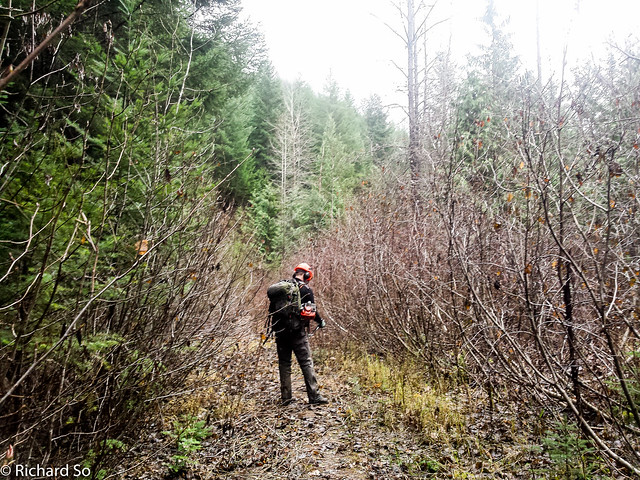 We went to work on the road, Jason on the chainsaw, with Mike and I switching up between the loppers and the brushcutter. We were in a zen-like state, working away in the forest with nothing but the sounds of the two-stroke engine. I’ve spent so much time bushwhacking in the last couple years. It was very therapeutic to be slicing away at the alder instead of squeezing in between. 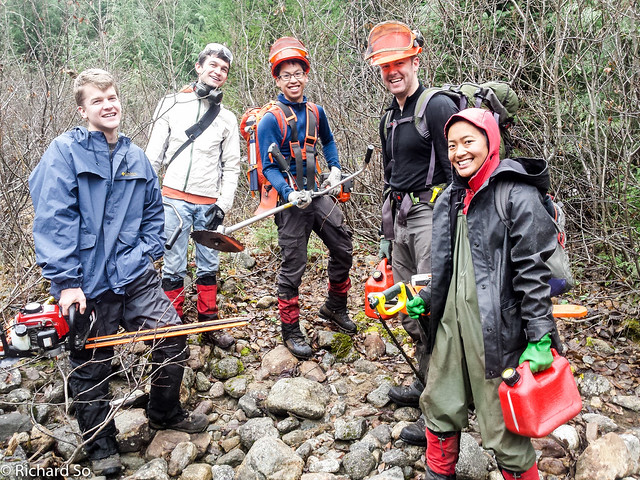 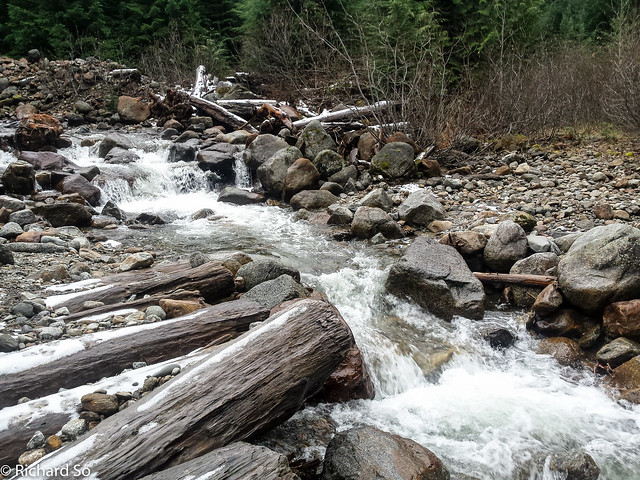 The non-existent bridge over the East Fork.
We caught up to Lea, Lianne, Sebastian(?) and Jake(?) who had been working on the road beyond the east fork of  Lizzie Creek. There was a trace amount of snow, maybe 5cm at our high point of 910m. with another 3km left to reach the lake. In the fading daylight, Jason and I mowed down the alder on the sides, getting right down to the base for each cut. By the time we were done, it looked like an excavator had just plowed through it. We stashed the power tools, helmets and gas jerry in the forest. The rain started as we hiked out by headlamp, joined by Cassandra Mirko and Vincent(?) who had hiked up to the Lizzie Cabin. They reported deep snow, potholing up to their waist at times. 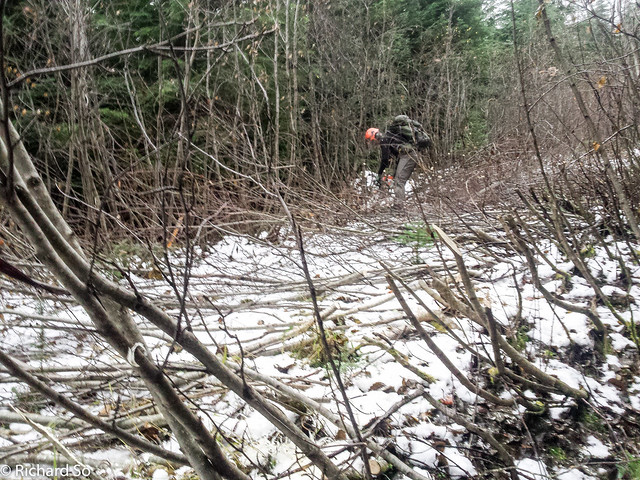 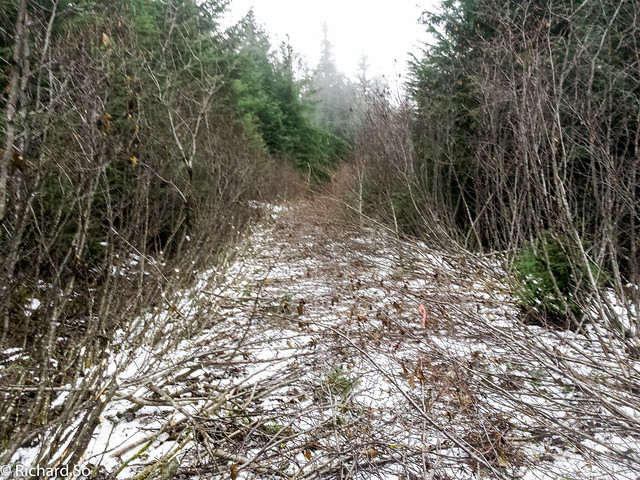 Jason and I were back at it early Sunday morning. We left the car in the rain, which quickly changed into fat snowflakes above 500m. The heavy snowfall quickly changed our plans to get up to the power tools and brush out the upper road. The weight of the new snow, up to 15cm in places, had bent over the alder that was further back in the road. It was disheartening to see this, but also gave me a good sense of how far back we needed to cut the alder. It looked like an excavator had plowed through the road by the time we were done. I’m happy to say that the first 7km of the road is in very shape condition right now. 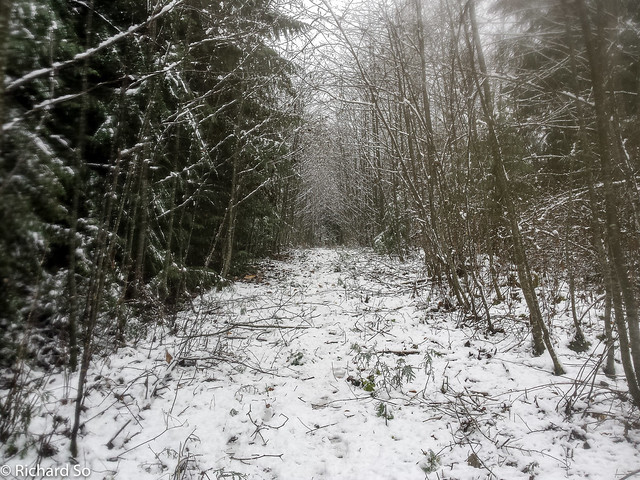 How most of the first 7km looks now 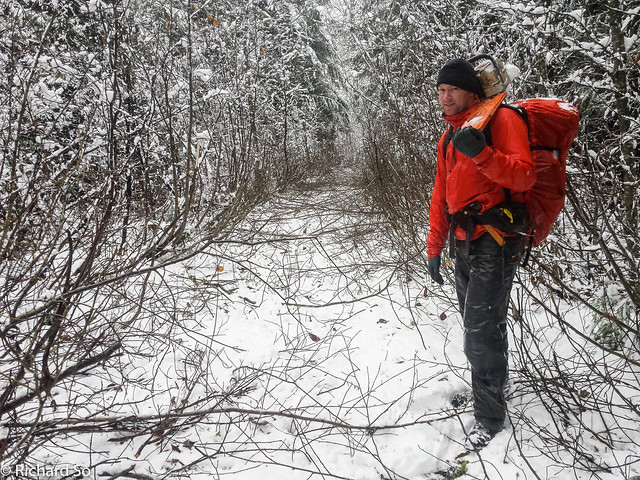 But as the road climbs, the route ahead turns into a snowy alder hell. It was hard to tell where the road was, which was revealed as we dusted off the snow, and the alder sprung back. By this point, I had wet cold fingers, stopping periodically to wring out my work gloves. We found our tools, calling it a day at that point. There was no point in going further with the work, we’ll have to wait for the summer to finish the job. I don’t remember how bad this section was when I skied up here five years ago. But Kyle, who emailed me earlier, told me that last winter he was turned around by the impassable wall of alder, anchored down by the snow. 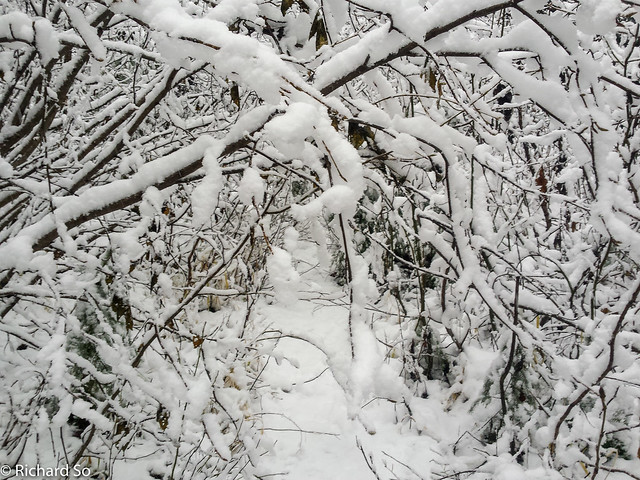 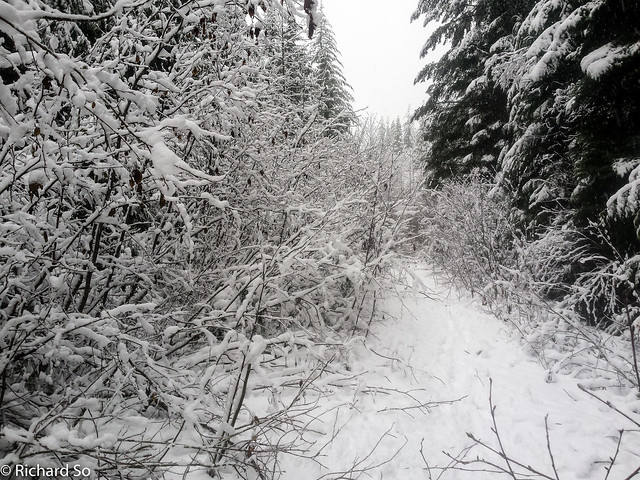 And then cleared away 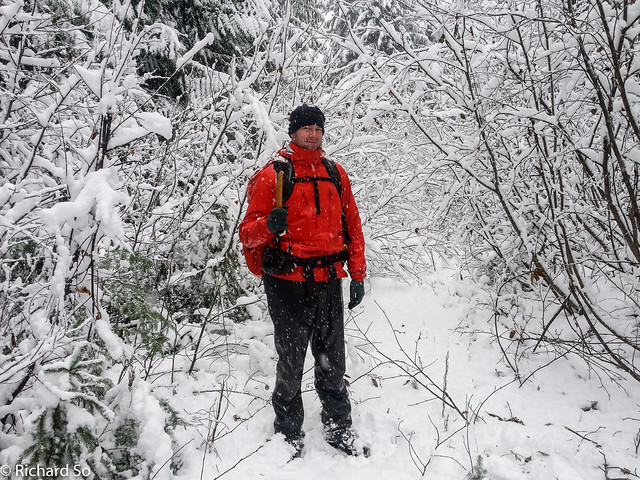 Hatchet and saw were the tools for today. 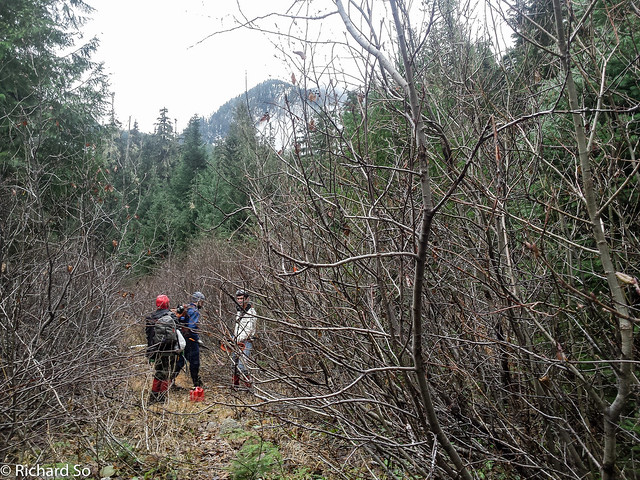 Before the snow yesterday 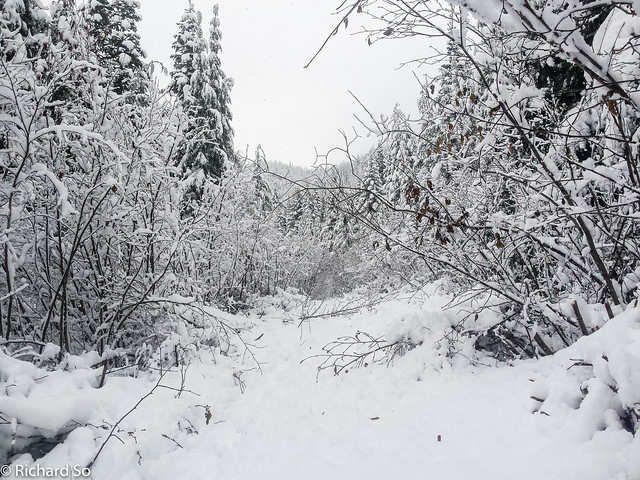 Upper section looking past where we worked on. Another 3km to go.
There’s still lots of work left to improve access to this incredible area. We’ll need to work on the toughest section as the road climbs up to the lake. There’s also deadfall across the trail leading up to the Gates of Shangri-La. I’m hoping to organize another work party next summer. If you’re interested in helping out, please contact me and I’ll keep you updated. 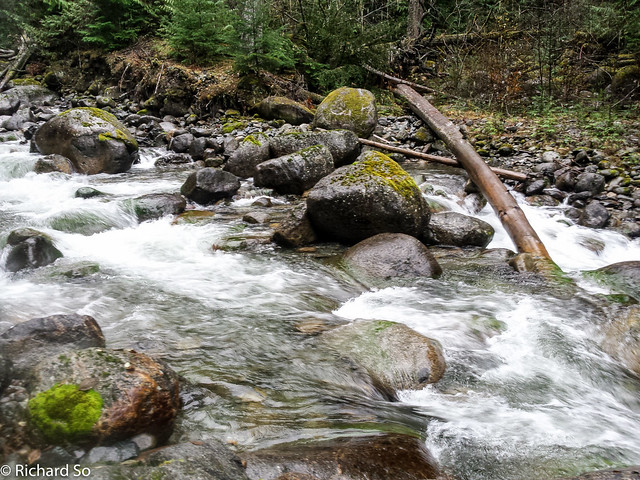 Below the washout, where it’s possible to cross over in low flow. 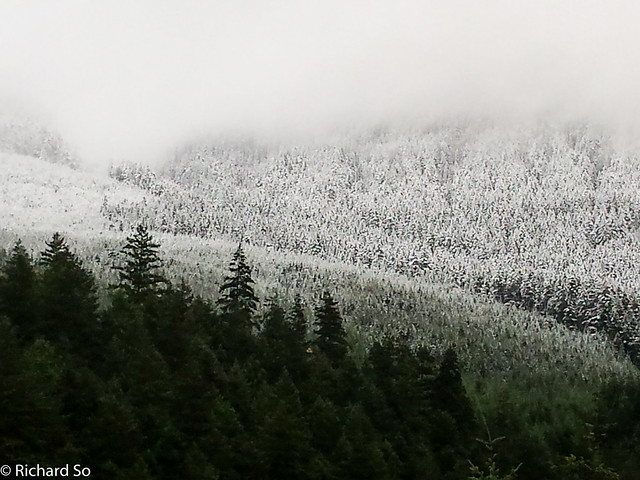 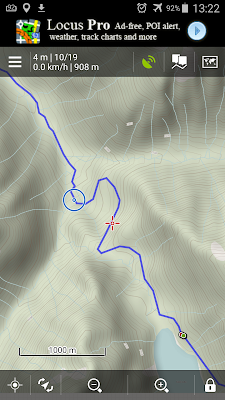 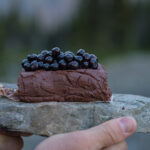 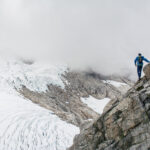