Back in February, I decided to enter the Kneeknacker again, with a guaranteed spot as I didn’t get in the last two years. Instead, I was taking photos and cheering on my friends in the race. My goal for the day was to finish with a “sandwich” time, somewhere in between 6-7 hours, the range of my two previous finishing times. My training program to date consisted of short evening runs, a handful of longer runs, some climbing, sailing, and lots of skiing over the winter.

I knew the second half was going to be painful, and my plan was just to hold on, let other runners pass me and cross the finish line injury-free. I haven’t run the last quarter at all this year, and my longest training run so far was a 3/4 run from Nelson Canyon to Lynn Valley back in June. This sounds like a good training run, but I ran only a day after coming back from two weeks of sailing around Vancouver Island. I took a tumble up on the Hollyburn cross-country trails, on a flat wide smooth double track. My wobbly sea-legs did little for my confidence for the rest of the day, and I had a slow and painful run to Lynn Valley.

Fortunately, I had the sense to bring my running shoes with me on that sailing trip, and I got out with Elliot on two long runs. His advice to me was along the lines of “you need to run more Richard,” when I told him I was averaging 1-2 hours of running a week. The first one was in Winter Harbour, where we ran along logging roads in search of the ocean. I blame the bbq and beers that I had just before we set off, but we never made it to our destination at Grant Bay. We ran again in Ucluelet, but I’m not allowed to post how long it took us to run the twenty kilometres of mostly flat trails and roads that day.

I was feeling out of place amongst all the fast runners at the front of the start line, but I wanted to have a good first half. While most runners seem to dread the Black Mountain climb, it’s actually the most enjoyable part of the day for me. Instead of running, I get to just hike up at a casual pace, at the pretense that I shouldn’t over exert myself so early in the race. I’ve been doing this all winter and spring, hiking with either skis or a climbing rack on an adventure somewhere.

I was the first one to start walking at the first gravel hill. I was just going to do my own thing, knowing how much running was ahead. Fortunately, everything seemed to go by quicker than I remember, and soon I was at Black Mountain, where Nick and others transformed the high point of the course into Black Sabbath Mountain. Part of my training program also involved watching Nick and others run in the Mount Marathon race. If you haven’t watched that race yet, check it out, the ascent and descent paces are mind-boggling.

My first split into Cypress was 1:30:51. I thought things were going well, until I tripped at the top of the Hollyburn Chute, and crashed into the bushes on the left. I’ve run this section of the course so many times, and it was frustrating to have fallen here. This was a painful mistake, as both calves seized up, and I was just lying on the side in pain with both legs immobile across the trail wondering if my race was over. I knew Peter was right behind me, having leap-frogged with him along the cross-country trails. Just as he came in sight, I massaged my legs back to life and stood up. By the time I was moving again, slowly at first, Peter was out of sight.

After a full season of backcountry skiing, my quads were feeling strong enough for this long section of downhill running towards Cleveland Dam. I’ve made it out to a number of the Wednesday night training runs, which have helped me to memorize this portion of the course. These runs formed the core of my training program, and I tried my best to make it out to them when I wasn’t away sailing (which was often). I was the 10th runner into Cleveland Dam, at 2:42:28, a position I wouldn’t hold for long. Not being much of a runner, I wasn’t looking forward the second half of the course, which has more runnable terrain. I caught up to Alex near the dam, and we shared the same thoughts. Go fast in the first half, and just hang on and suffer for the second half. Alex had pushed it hard on the climb to Black Mountain, and was the 5th runner across Cypress! He squeeze through in just under six hours today, a personal best.

I left the aid station with a ziplock bag full of boiled potatoes dipped in salt, watermelon and oranges. After running across the road, I started walking up Nancy Green Way and eating the smorgasbord of fuel in my hand. At this point, a few runners passed me, all them doing a mix of running and hiking up the hill. I caught up to them on the uphill forest hike past the BCMC turnoff. With Peter right behind me now, I continued running along the technical rooty trails across Fromme, trotting along at a nice pace. I walked all the hills, and ran the downhills, and it felt like just another training run. Going down the stairs seemed to be the worse for my lower legs. I ran along the Varley trail, and up the hill to the Lynn Valley casino aid station, at 4:09:13.

Just like my last race in 2012, this is where the suffering began. I followed Peter out from the aid station, impressed by his knowledge of all the little shortcuts and corners through the technical trails below. Peter has an impressive running resume, and is consistently strong in the second half of the race. In the Kneeknacker alone, he has won the overall title multiple times, many finishes under five hours, and has held the course record for a long time. Peter finally pulled ahead at Lillooet Road, when I was no longer able to run the gradual uphills. I forgot about this hill. I stopped to stretch my calves and hope that they would hang on for just a bit longer.

The weather was just about as good as one could imagine for the race. The cool temperature and clouds were a stark contrast to the conditions in 2014. Last year, I volunteered as a photographer at the Hyannis Aid Station. It was hot and humid in the forest that day, and I had a vivid image of all the runners going through here and deep in the pain cave. And then there were those who smiled in joy as the cold water trickled down their neck from the sponge bath at the aid station. Even though it was cool and cloudy out, I was happy for the soothing sponge bath.

I walked most of the gradual uphill getting towards the Seymour Grind. It’s frustrating because it’s all runnable, just inclined enough to make it hard on the legs, but not enough to just hike. I wasn’t the only one hurting here, and everybody around me was comparing notes on which parts of their legs were hurting the most. This was a struggle with cramping calves. I was happy once I started climbing up the grind, switching over to my good muscles and knowing that most of the tedious uphill running was over with. I continued to jog along hoping my legs would recover, stopping at the Seymour aid station to fill my water bottle with coke. My ziplock bag of food had been in my hand for a while now, which now had a closer resemblance to a salted potato-watermelon-orange smoothie.

Knowing that I was close to beating my old time, I had to try to run harder! At the end of the race, the section from Quarry Rock never feels easy. The terrain is technical and the up and downs are hard on tired legs. I was just trying my best not to crash again here. I could hear the cheering now from the finish line, and all the hikers were also cheering me on. I finished in 5:48:08, walked across the finish line, and promptly fell over onto the grass, content with a new personal best.
Thanks again to all the organizers, racers, and volunteers for putting on such a great event! 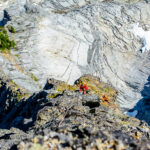 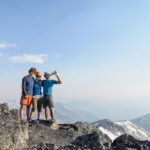