Skip to content
I had a great time racing onboard Ultraman II, a Ross 930, for the 47th annual Southern Straits race during the Easter weekend at the beginning of April. We raced the medium course, which was a 98.1 nautical mile course starting from Dundarave Pier off West Vancouver, out to Sisters Islet and back to a finish line off Point Atkinson. As some of you know, I’ll be racing on this boat for the VanIsle 360 race, which circumnavigates Vancouver Island over nine legs this year. This race is one of the qualify races for that event. 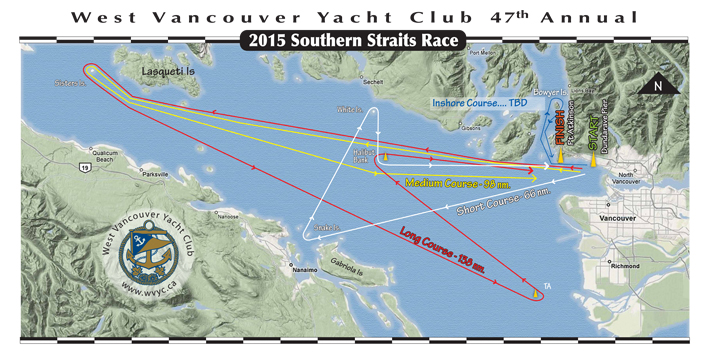 For this race, Ultraman II sailed with a crew of six. For regattas in English Bay, the boat sails with seven or sometimes eight. These were our positions on the boat. Skipper on main trim, Andrew driving, Jason and Callum on trim, and Rich and Dave on foredeck. 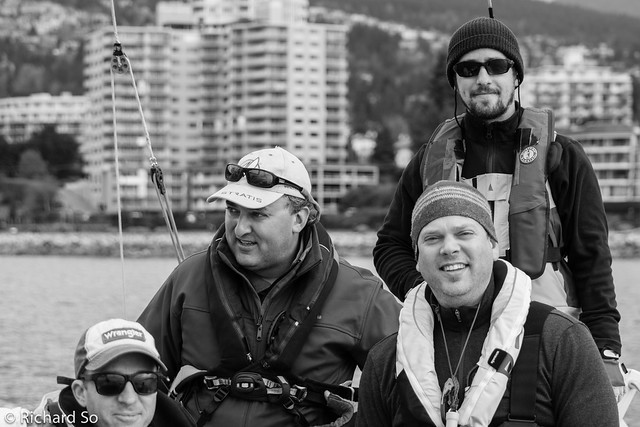 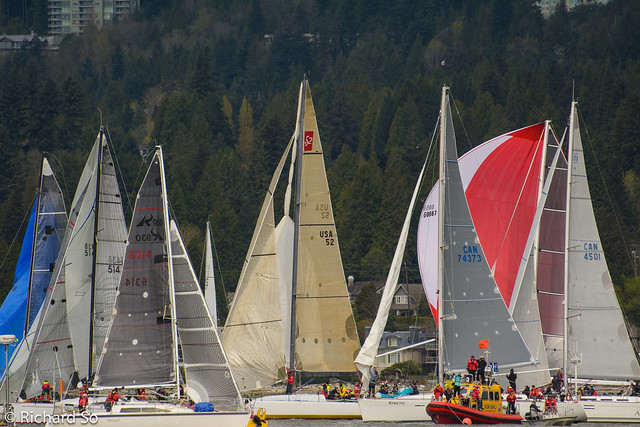 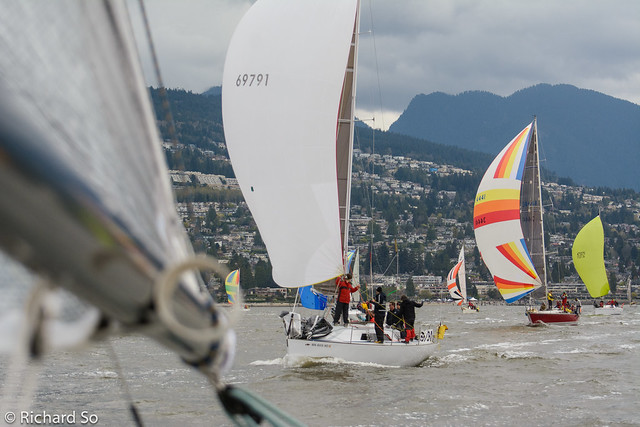 Andrew did a great job of driving the boat through the start, where we crossed the line in clean air. It was quite the sight to see so many spinnakers flying in English Bay. The winds continued to build as we left English Bay. We botched a gybe, and unfortunately resulted in a ten feet tear in the bottom panel of the brand new spinnaker. We quickly dropped that spinnaker, and hoisted a smaller spinnaker in the meantime. We watched as other boats ahead were overpowered and broaching and blowing up spinnakers in the gusty dark waters off Cape Roger Curtis. There was even a man overboard on an Olson 30, Fiasco, when a strong gust overpowered the boat and dumped a crew overboard. Luckily, another boat was quick to react, dropped their spinnaker and quickly retrieved the fallen crew member. I didn’t see it happen as they were behind us, and only heard it through the radio chatter. 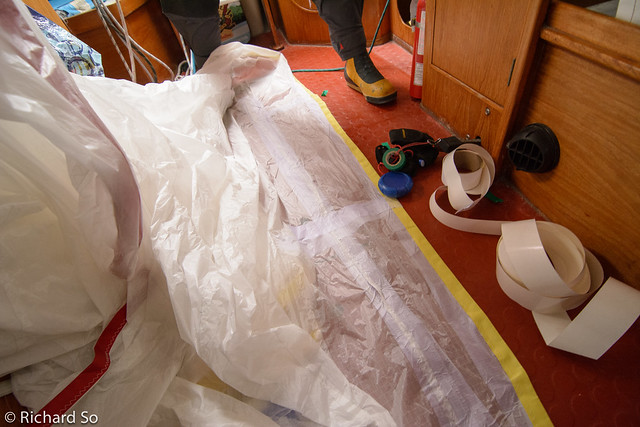 After watching nearby sailboats destroy their spinnakers, we geared down. The 4S spinnaker came down, and we hoisted the the fractional kite. The other two spinnakers are cut so that that the top of the sail is at the top end of the mast. The fractional kite, used in heavy air conditions, has a smaller height. After hoisting this spinnaker, I noticed a square fist sized hole near the top. We had fun with this spinnaker up, sailing in twenty-five knots and surfing down waves. 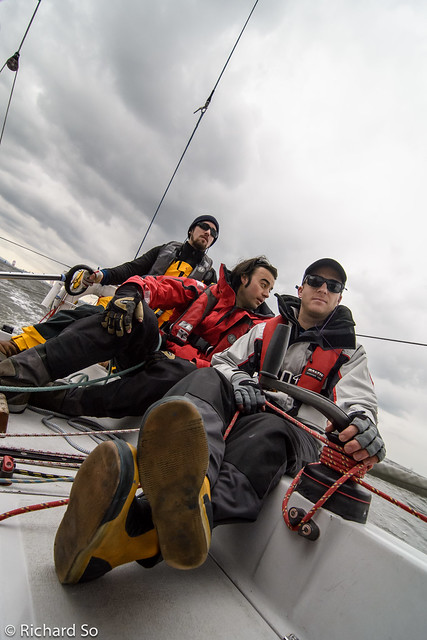 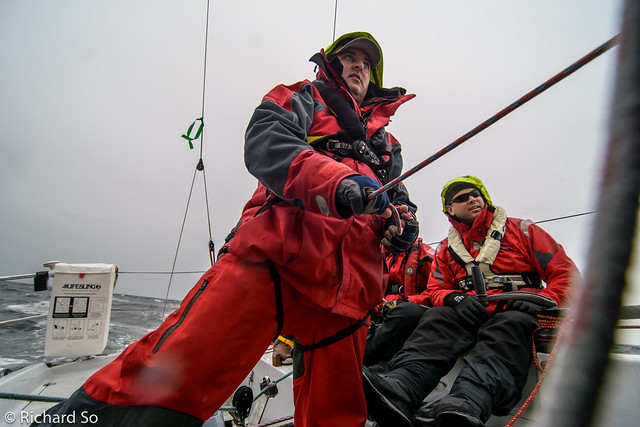 I was down below, making repairs on the spinnaker, and all I could hear was numbers of boat speed shouted out by the crew on deck. I looked out into the whitewater rushing past the cabin windows, and heard 16.1 knots shouted out, the new top speed on the boat. Our previous top speed was 12.9 knots. The fun didn’t last for long. Just before setting up for another gybe, I looked up and saw a full tear along the starboard side, nearly from top to bottom. Down it went. 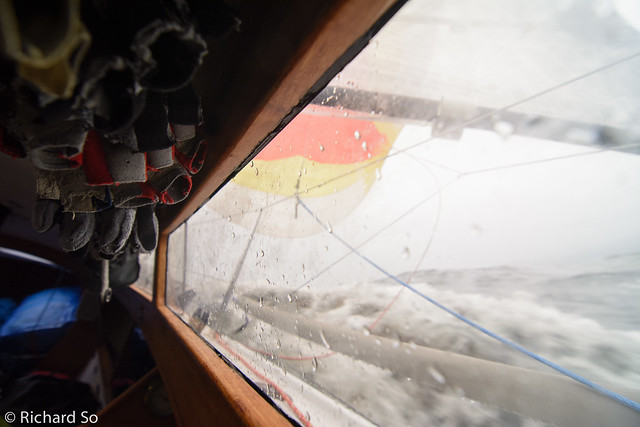 The breeze died as we sailed along the Sunshine Coast, but so did the rain. By early afternoon, the sun came out, and it was beautiful sailing conditions, moving comfortably northwards at 10-12 knots towards Sisters Islet. We sailed next to Havoc and Rubato, with faster boats ahead and left most of our competitors in the horizon. 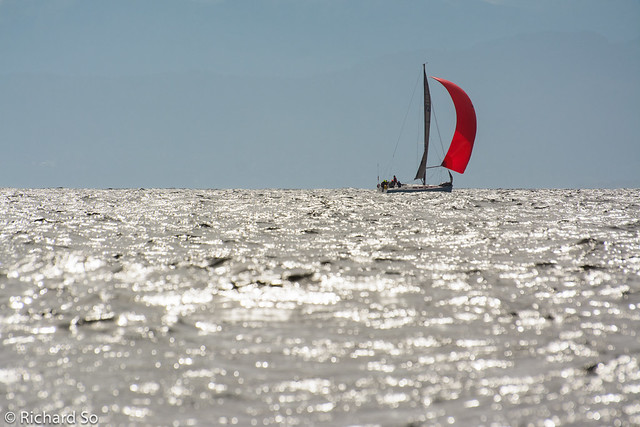 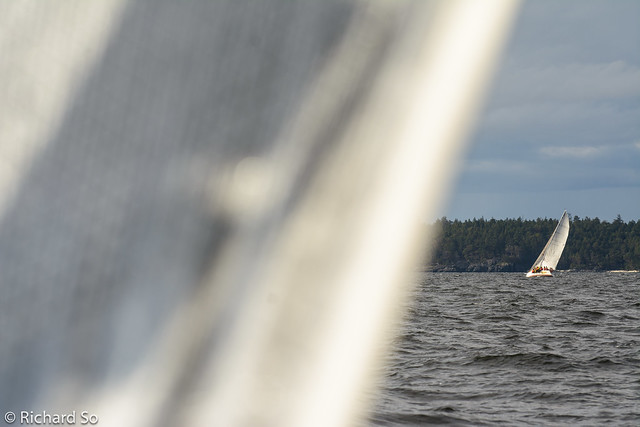 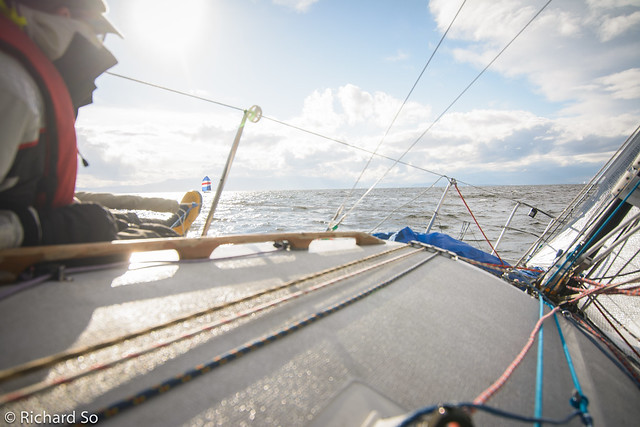 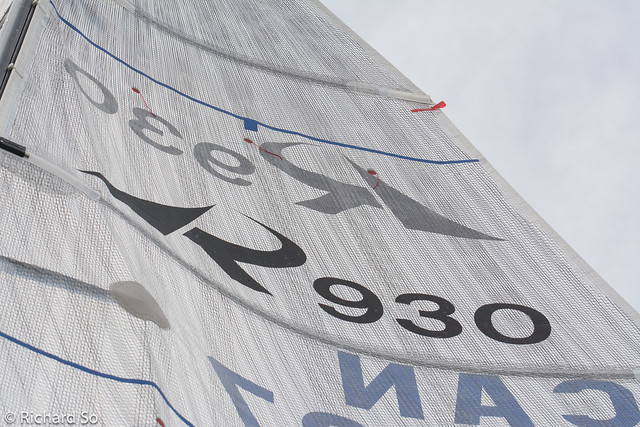 The wind shifted from southeast to west as we approached Sisters Islet in the late afternoon. Dinner was a delicious beef stew thanks to Jason, which was served out of thermos while sitting on the rail. The bow of the boat crashed through the steep choppy waves. Eating with a spoon was futile. You would scope a chunk of potato or beef out, and then the wind would carry it straight into your face. I chose to drink from my thermos instead, trying not to lose my spoon or the thermos overboard. 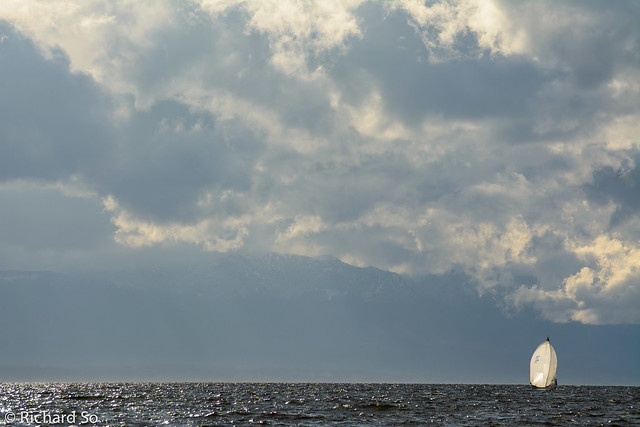 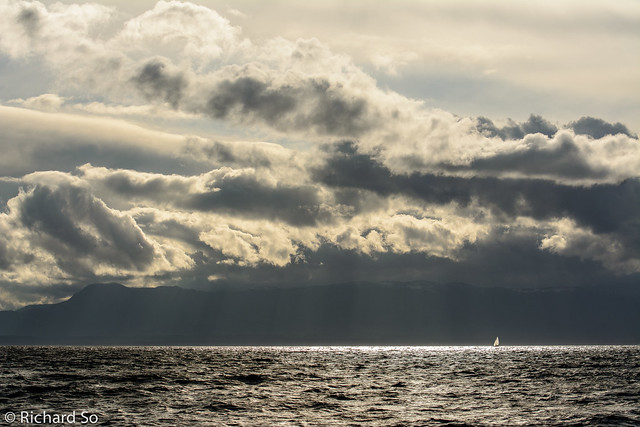 The final mile to Sisters Islet was memorable for me. We had the full main and #1 jib flying. We were getting overpowered, so we reefed the main, and changed to the smaller #3 jib. Trying to stay balanced and on the boat while working around the wet foredeck was a challenge, with waves crashing off the bow and white water glistening in the soft afternoon light. 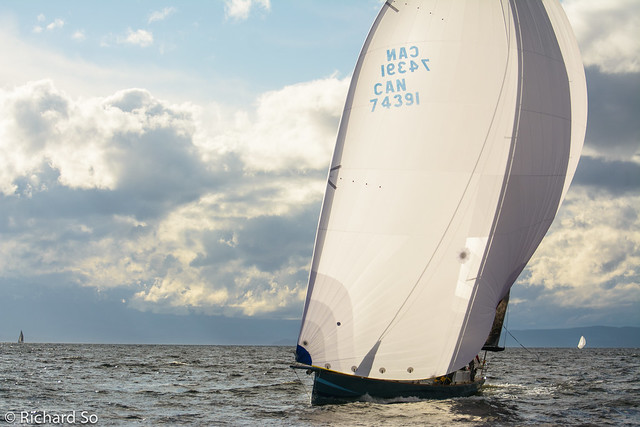 Sisters Islet is a small rock island off Lasqueti Island. The original lighthouse was built in 1898, but replaced in 1967 after seeing decades of storm surges and southeast gales. The buildings were only a few metres above sea level. The lighthouse is now automated, and all the buildings are boarded up. 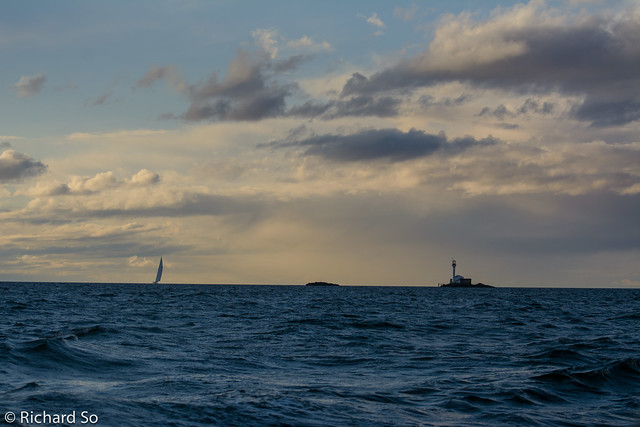 At this point, there was a decision to be made. Sail along the Vancouver Island shore down to Ballenas Island and then cross back over, or go early and sail down the middle of the strait, a more direct route but with possibly less wind. The weather forecast had suggested that the breeze would die overnight, so we followed the island shore for more consistent breeze but we ended up sailing in five to ten knots and sometimes less. It turned out that staying in the middle paid out for boats that took that course. We changed course before sailing into some wind holes off Nanaimo that plagued other boats later on. 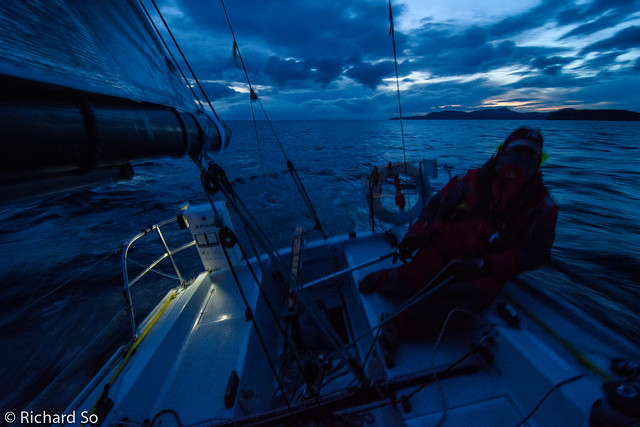 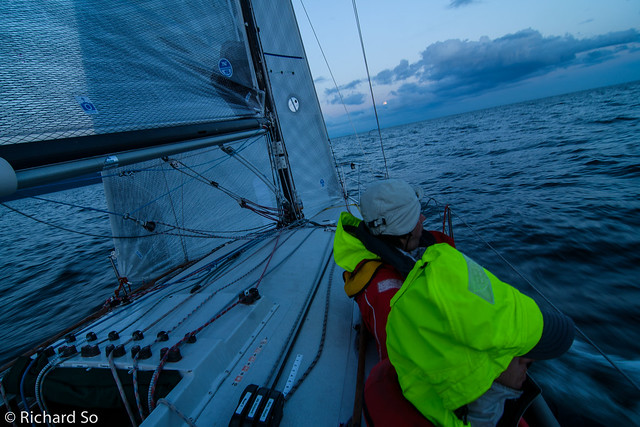 Sailing at night is beautiful. There is the romantic notion of casting off from the dock and sailing into the sunset. Free from any other distractions, I watched the bow slide between the waves, pointed towards the full moon rising above the clouds. The lights off Nanaimo reflected off the water, and the bioluminescence of the dinoflagellates glowed in the waves that rushed behind the stern. 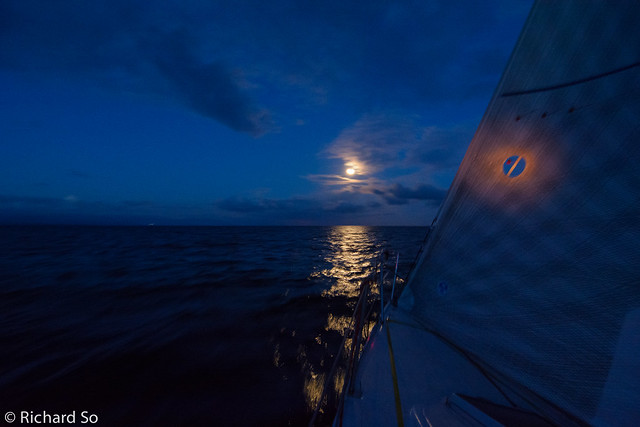 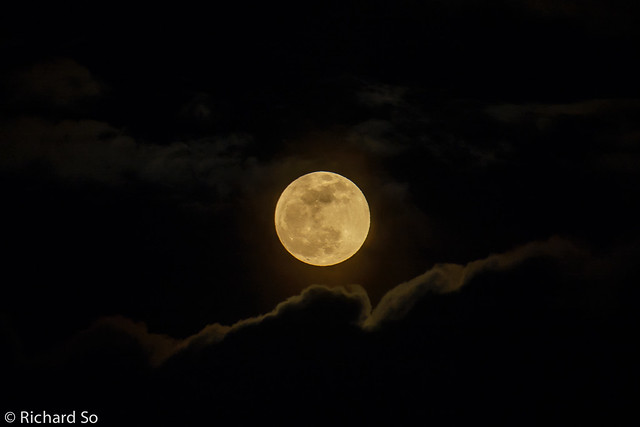 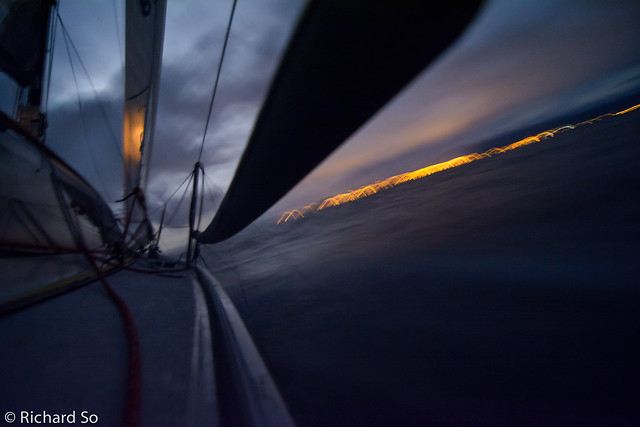 You might think that I just sit around on the boat all day long. There may be some truth to that, but I also spend a lot of time moving sails, folding sails and packing spinnakers. For every sail change, one sail needs to go down below, folded into the confined space into the cabin, and stored in the sail bag ready to be deployed later. The new sail gets moved up on deck at the same time, and this process repeats it self every time the wind strength or direction changes. At night, we are all connected to the boat via a safety tether, which connects to a jackline that runs from the stern to the bow. Our PFD’s have a strobe light that automatically activates in case somebody falls into the pitch black ocean. Falling overboard is best avoided, and the number one rule on the boat is to stay on the boat, a mantra that’s voiced frequently.

For a short race like this one, there was no set watch schedule. Everybody just went down and took a break when they needed to. We sail more conservatively at night. I took a break between 1 to 3am, catching two hours of sleep in the aft quarter bunk. Every time the boat tacked, I rolled over and adjusted myself. Any noise on deck, footsteps and the grinding of the winches are amplified into the cabin below.

When I got up, I looked out at the moon. Something was strange about it, I thought. It took me a few seconds to register that it was a lunar eclipse, and only a thin crescent was visible against the dark shadow of the moon. Moments like this make sailing special to me. I wore at least five jackets while sitting on the rail. It wasn’t that cold, but not moving and just sitting up there against the elements makes you cold. 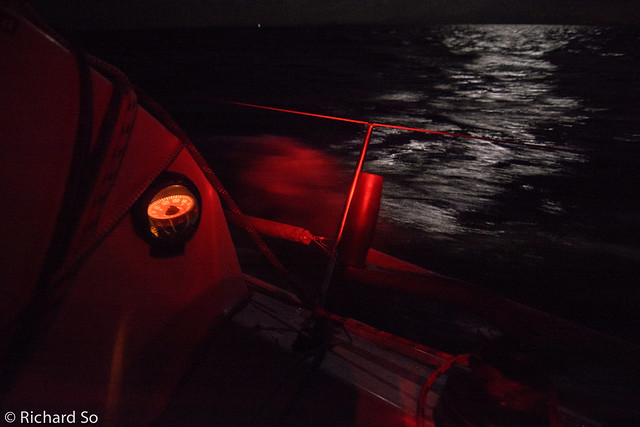 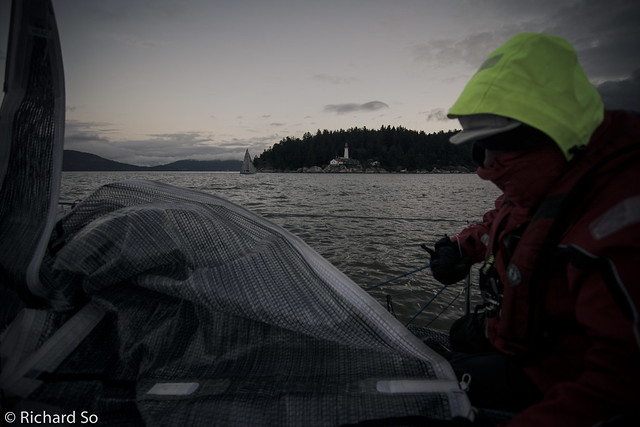 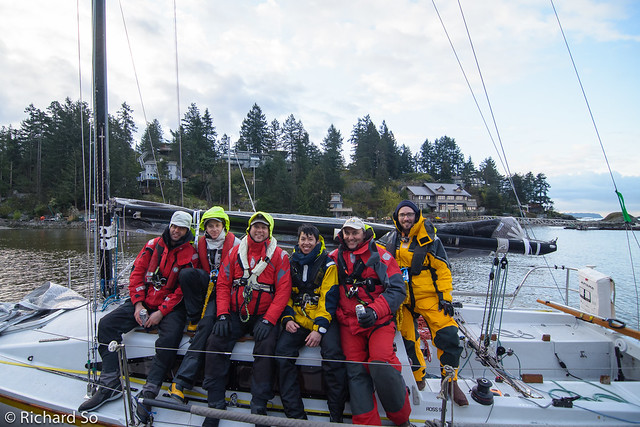 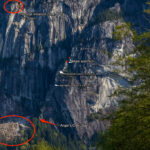 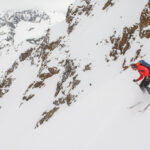