A few of us haven’t given up on winter yet. A rare January storm was forecasted for the weekend and there was the usual Friday afternoon problem of figuring where to go. Somewhere that was high enough, with good coverage, and suitable terrain.

The freezing levels were looking high, so Greg Lisa and I went up to the Duffey in search of powder, not slush, or sideway rain. We should be right of the edge of the storm. Saturday was going to be a dry day, with the storm passing through in the late evening and early morning hours on Sunday. 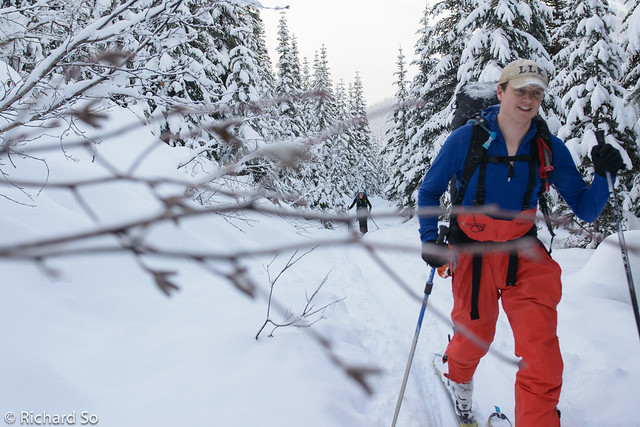 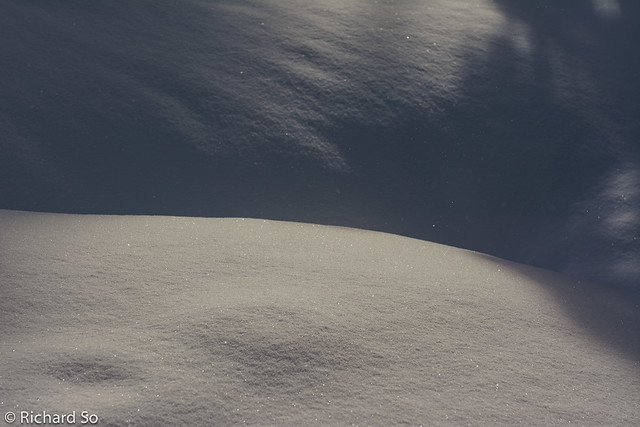 High clouds and sunny breaks greeted us as we broke out of the thin but barely sufficient snowpack in the forest, and glided along the flatter ground in the meadows. The creek was open, a sign of this year’s weak and warm winter. But as far as the approach goes, it’s in good enough shape.

I sat outside the Wendy Thompson Hut in the sunshine, enjoying the unexpected sunshine, while watching the clouds roll over the ridges from the southwest. That was our last glimpse of sunshine for the weekend, and the light turned flat with high overcast conditions. 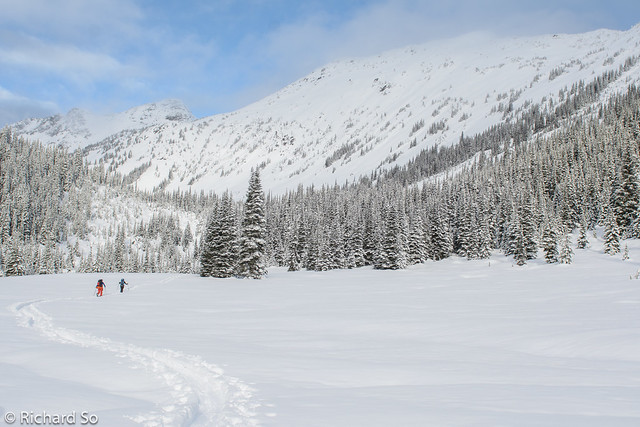 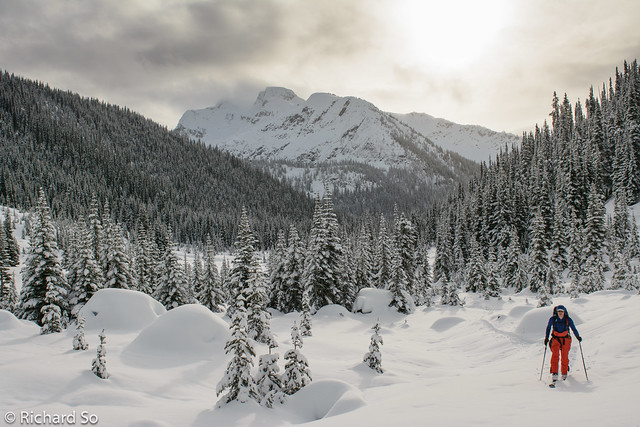 The closest skiing to the hut are the south facing glades north of the hut. We toured up through the glades and then open meadows, wondering about the ski quality. Thursdays storm brought new snow to the Duffey covering up a wide-spread melt-freeze crust formed during the inversion and warm temperatures from the past week.

The skiing was so-so, with 10-15cm of new snow, overlying a solid crust that could be felt on most turns. Next, we wandered over to the run known as Honey Bronzed and Very Desired, west of the hut. I was hoping that with the lower angle slope, I could ski overtop of the crust without feeling it. Greg took over the trailbreaking as we approached the col, noting cornice debris that had fallen off during the warm weather in the past week. A few metres below the col, Greg stepped onto a windslab, something that was on our mind the whole time. I was far behind, and watched as he slowly backed off the slope, with a faint crack visible for a few metres to his right.

I watched as the valley stratus rolled up, covering up our last window of visibility. Following the sacrificial method, we alternated the ski down, turning blinding down the white slope. I just hoped to avoid any remnant cornice debris, icy bowling balls in the grey room. The turns were surprisingly good, and best on the low angle stuff as predicted. 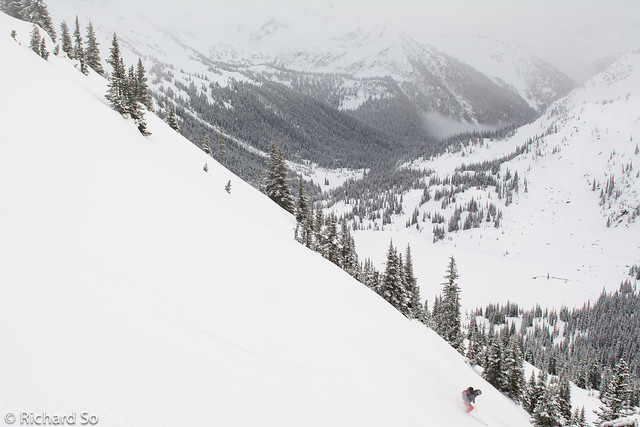 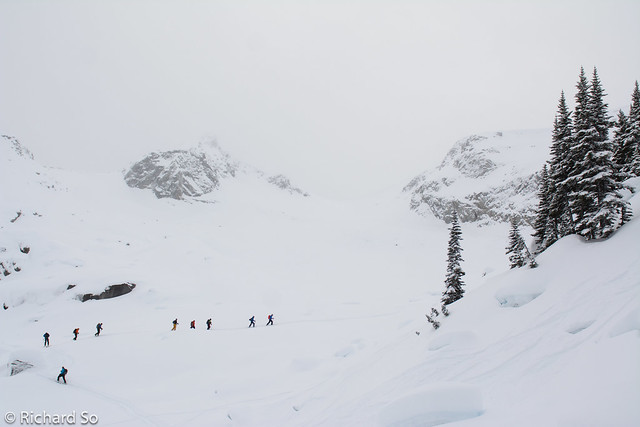 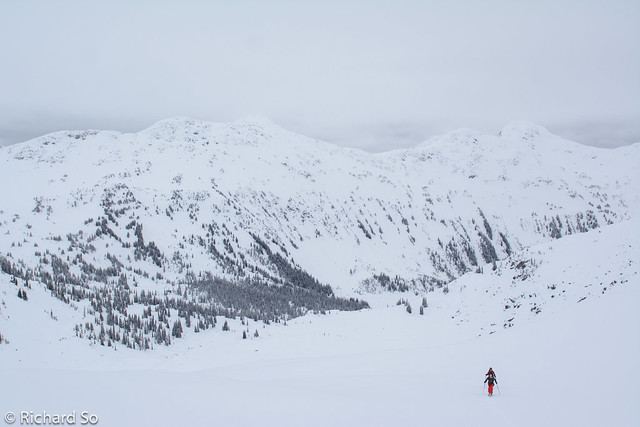 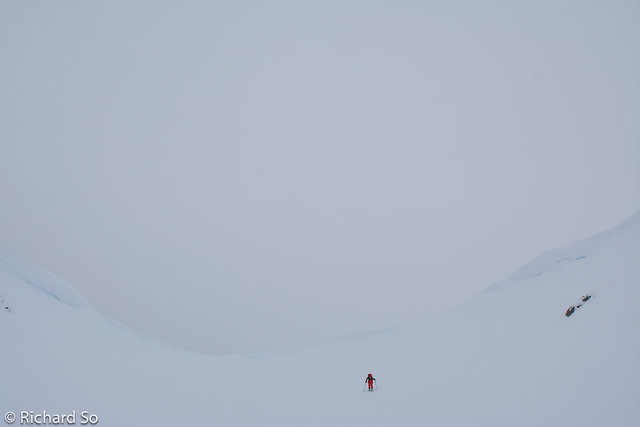 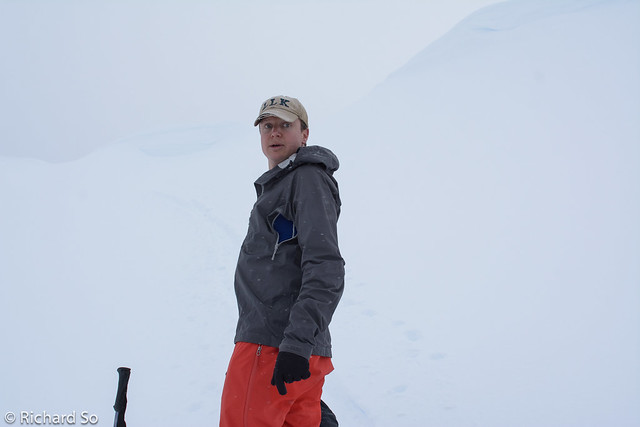 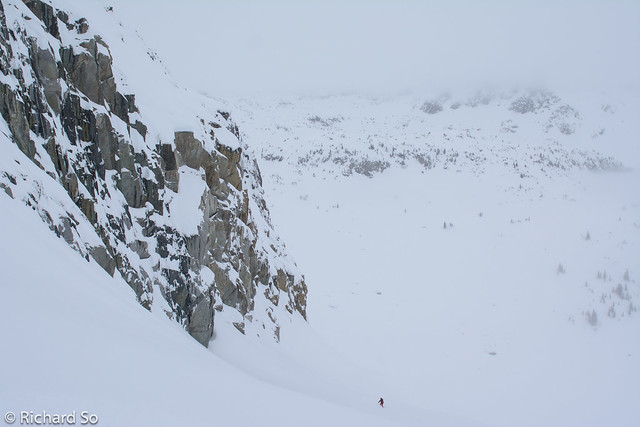 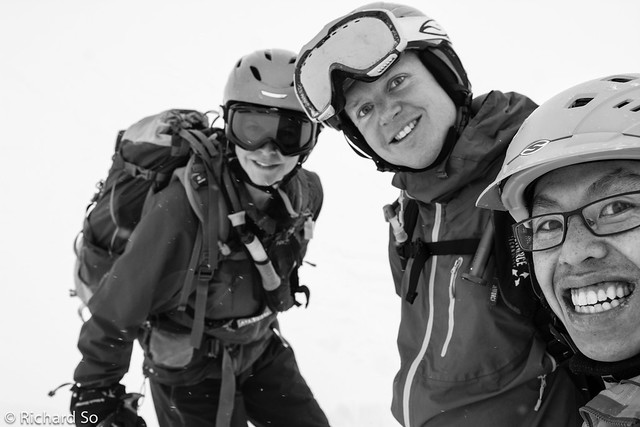 The Wendy Thompson Hut has been booked up for every weekend this winter. It’s not surprsingly, given the easy access and good ski terrain nearby. I have trouble planning a weekend so far in advance, so we were here with a tent, ready to winter camp. Greg bought a new tent, a Bearpaw Luna 4, and was eager to test it out in winter conditions. This pyramid tent is similar to the popular Black Diamond Megamid, but made with lighter and stronger cuben fiber instead of sil-nylon. The whole tent wall weighs 560grams,  excluding the central pole, which can be substituted with two extended ski poles strapped together with voile straps. A featherweight winter shelter, but would it hold up to the testing conditions of a warm overnight storm with heavy snow?

I sat inside the tenting, looking up at the two ski poles strapped together and wondered how the night would go. We listened to the snow flakes falling outside, and then cascading down the sides of the tent as the snow accumulate around the top. Greg and Lisa shared one side of the tent. I was on the other side, but part of the floor space was dug out to use as a kitchen and place to put our boots during the night. Through the night, the tent walls sagged onto my sleeping bag under the load of heavy snow. What was once a spacious bed, turned into a narrow bivouac between the wet cuben wall and the hollow pit below. I looked up, blurry-eyed, and the once straight pole-setup was flexing over like a crescent moon. Lesson learnt. Bring the dedicated pole for winter camping when the forecast calls for snow. And the reality is that tents will always need digging out in a storm. 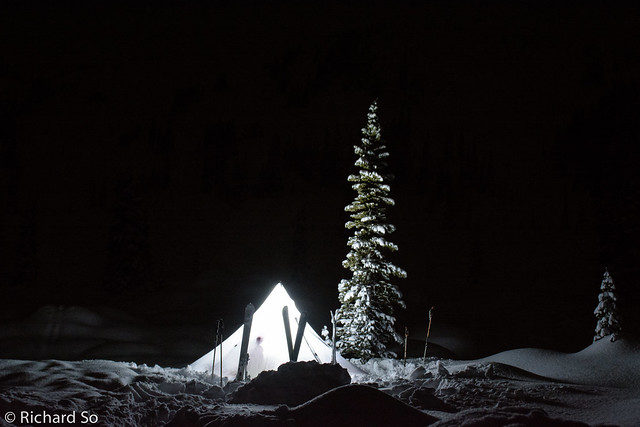 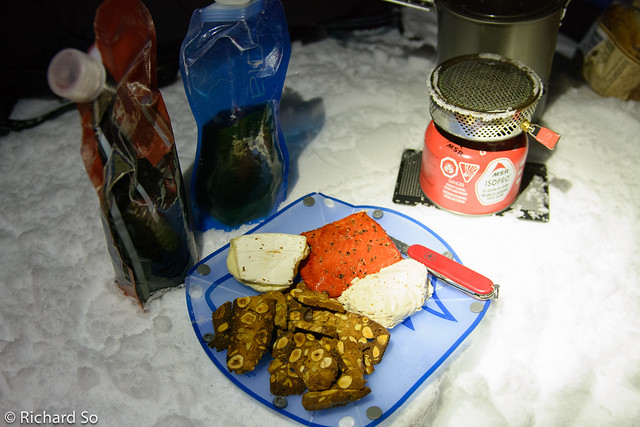 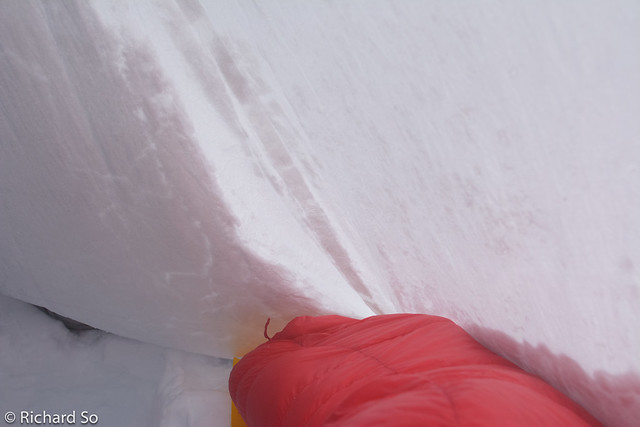 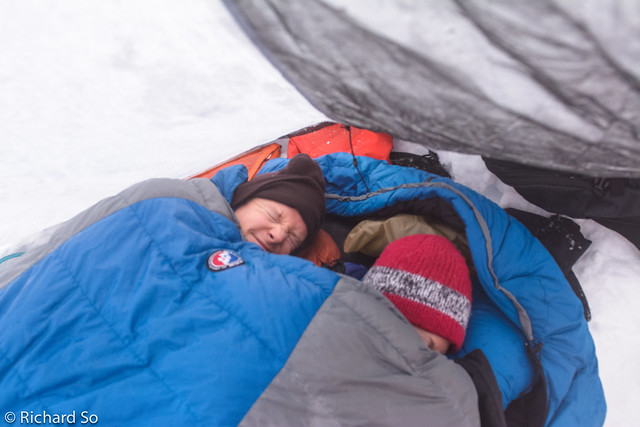 We woke up to 25cm of medium-density snow. The morning was slow. Boiling water, slurping down oatmeal, and sipping on coffee while curled up in my sleeping bag, soaked on the outside.

The afternoon’s routine was simple, skin up, ski powder, repeat.  We skied hot laps, finding great skiing on the treed ridge to the west of the hut. The runs were short, but the skiing fantastic, deep powder and pillow fluffing conditions. Good enough for what has been a lacklustre winter. It continued to snow all day long, with strong winds.

We left the hut after 3:30pm, and made it back to the car without needing a headlamp. The coverage in the forest is thin, but skiable. That was a satisfying dose of winter. Thanks Ullr! 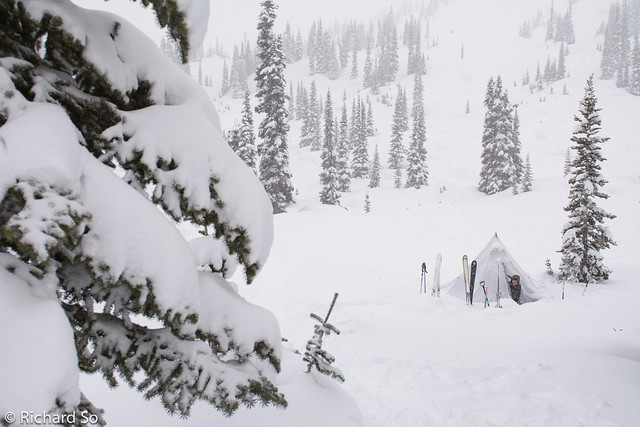 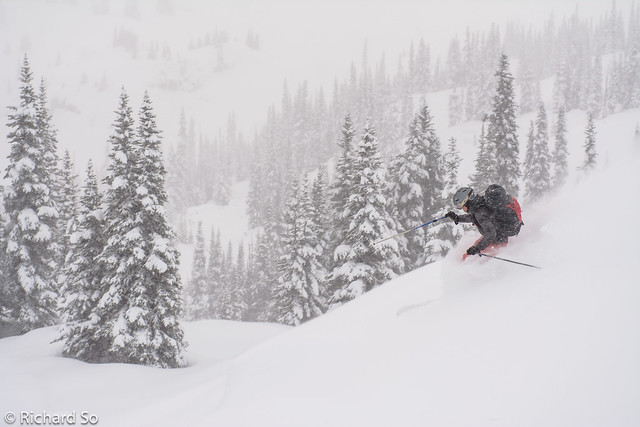 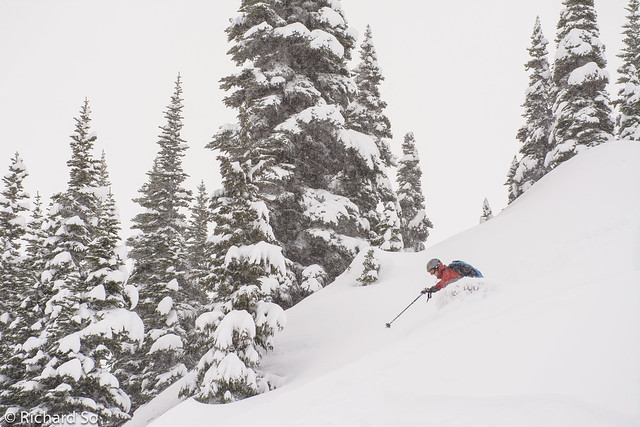 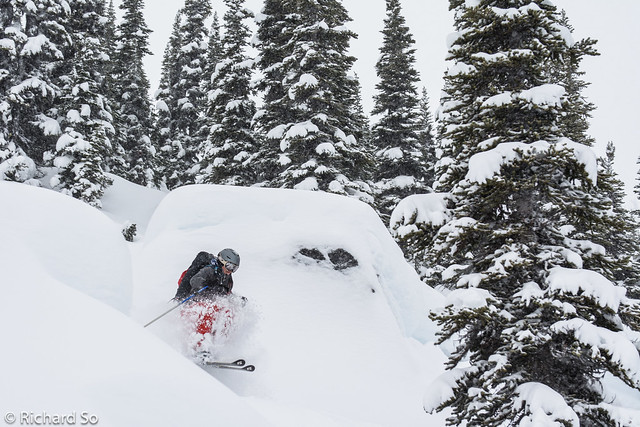 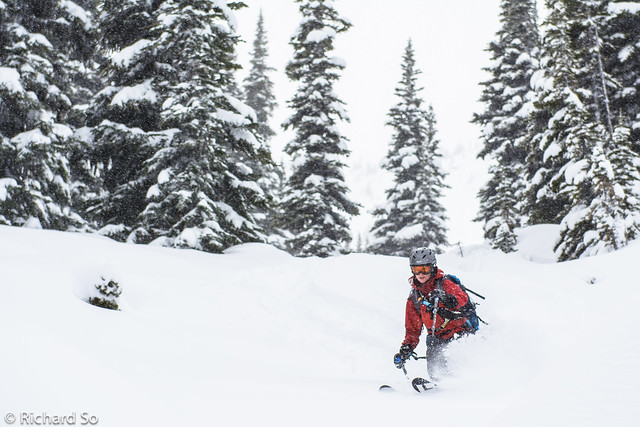 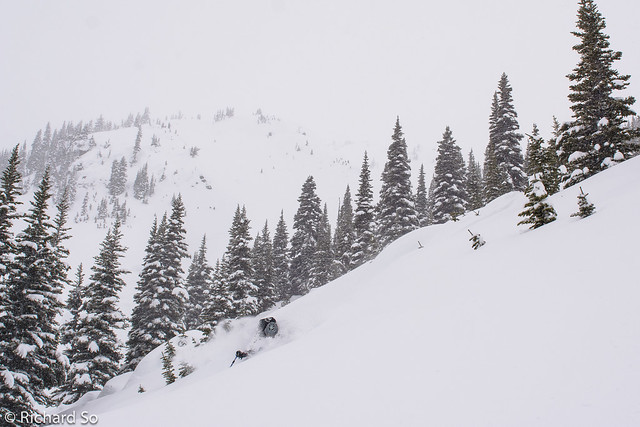 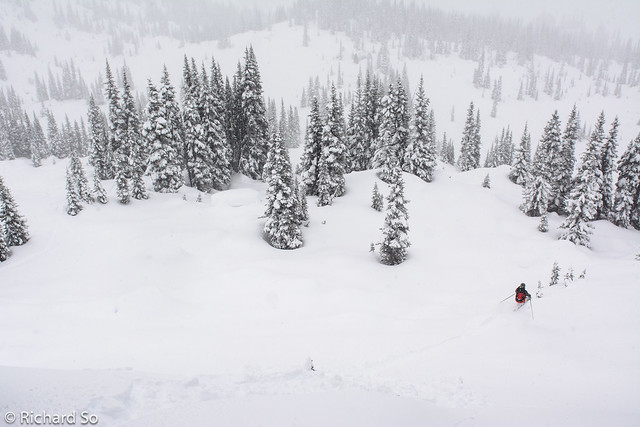 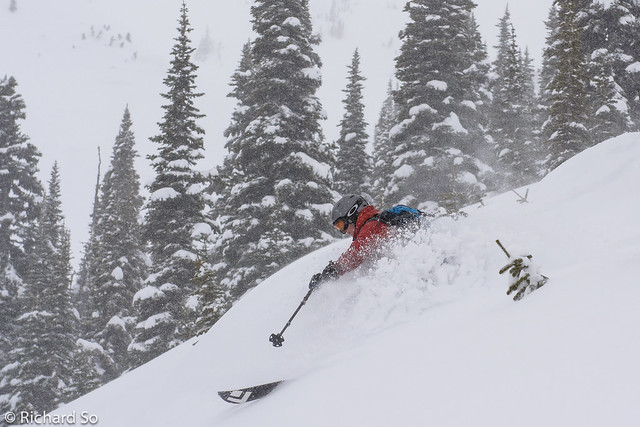 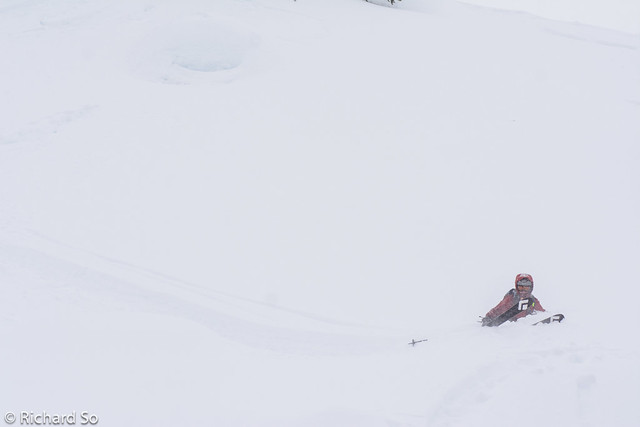 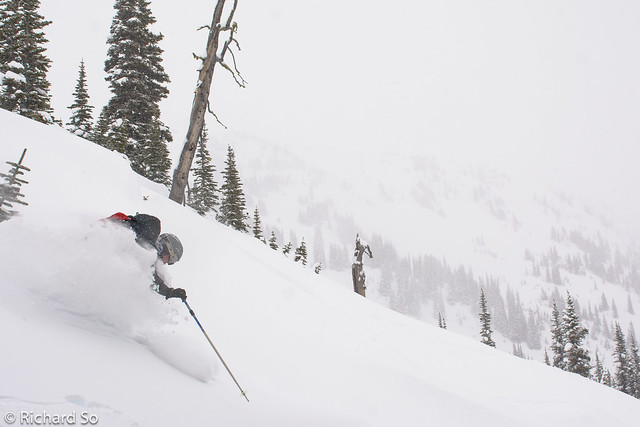 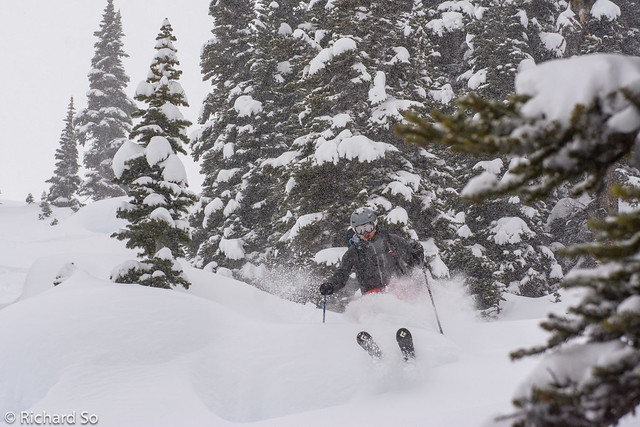 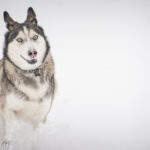 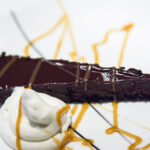