I got home from Manning Park, and emptied my pack onto my floor. It seemed like a pointless exercise to me. Unpack everything, dry wet gloves, skins, and boot liners, re-pack, and go to bed. I was home, only to leave again early the next morning to ski into the Cayoosh hut with Greg. A few other friends had left Vancouver on New Years day, and the plan was to catch up to them the next morning.

The coverage on the Duffey is getting better, at least on the western side. Most of the approaches, like Cerise Creek, Marriott Basin and Chief Pascall are in. The below treeline skiing is still marginal, but the snow pack up high is slowly approaching normal levels. The graph below is from the snow pillow at Tenquille Lake. The dark blue line is the current years snowpack, slightly below average, but well above last years mediocre snow pack (green line).

After a very short skin along the road, we reached the Cayoosh Hut, where we found the rest of the crew getting ready. Stories were traded of epic crust and extensive yo-yoing of the one patch of nice snow.

Coverage was still thin above the hut. I took my time skinning up the icy track through the cutblock and the boulder field, zig-zaging up between exposed rocks. Another metre of snow would help to cover up the rest of the trees and boulders. I was expecting worse conditions though. We wandered up the valley south of Cayoosh, heading west along open slopes. The visibility was poor, but we broke out of a low-lying stratus layer as we reached a highpoint just north of the col between Cayoosh S2 and Cayoosh. 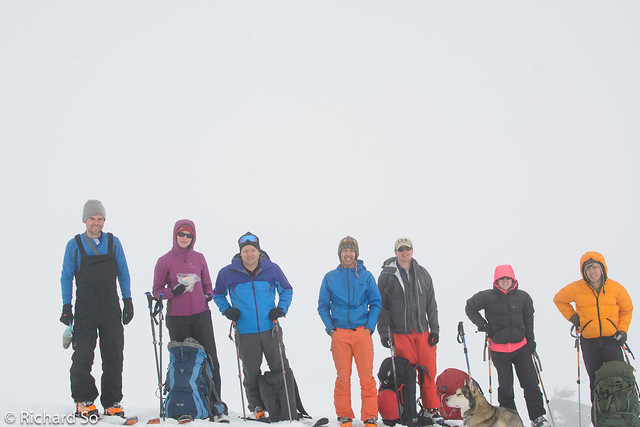 Waiting for the visibility to get better. Dave, Lisa, John, Rich, Greg, Ari, Tif and Colby. 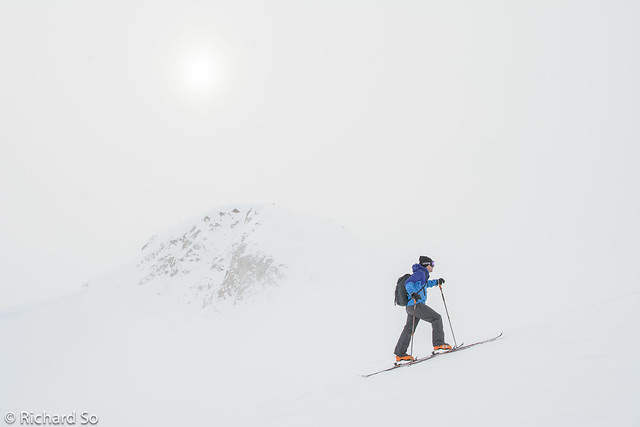 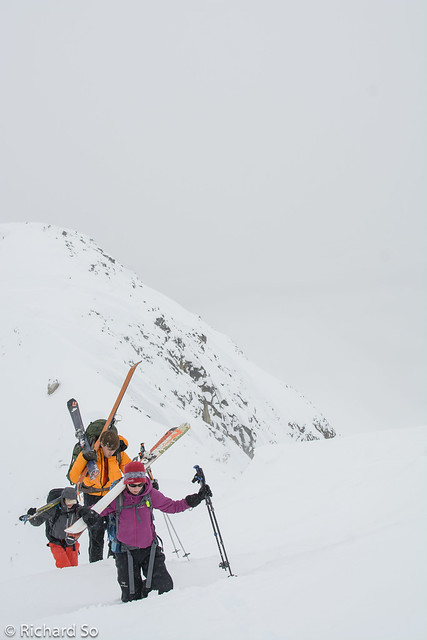 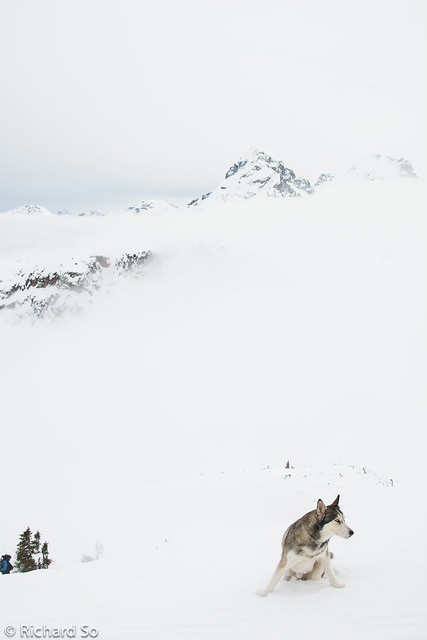 At this elevation and aspect, the snow had changed to a solid crust, scoured by the wind and affected by the temperature inversion. Light winds kept the clouds stationary in the valley below, and the high peaks of the Duffey poked out of the grey backdrop.

The skiing was better than expected. The surface crust was supportive, and we leapfrogged down the valley, alternating between going first while leading blindy, or following behind with tracks ahead for guidance. 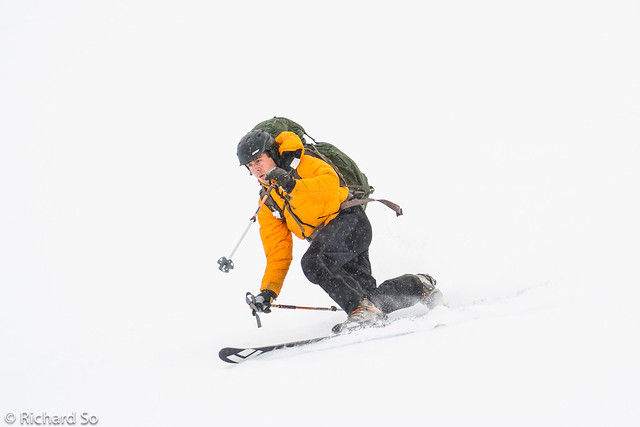 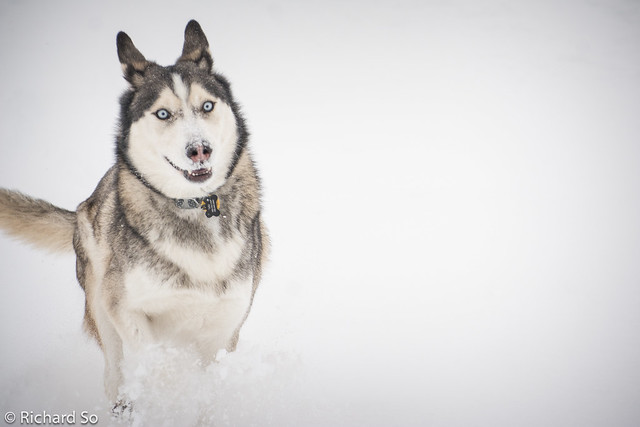 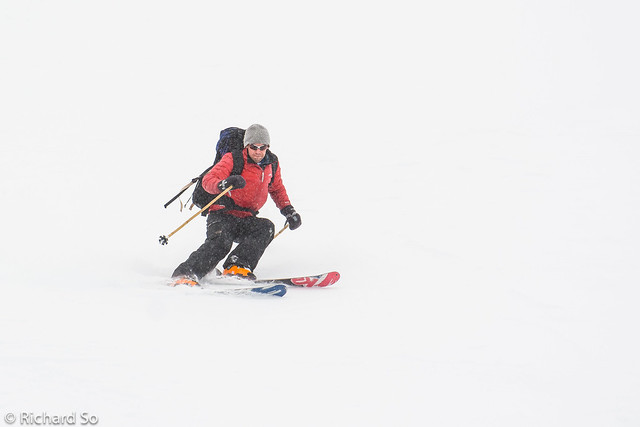 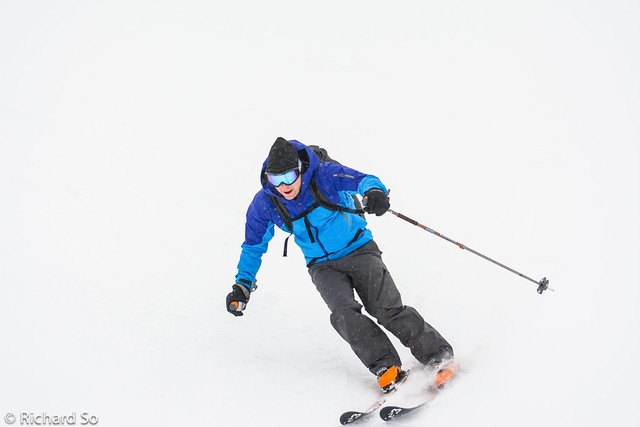 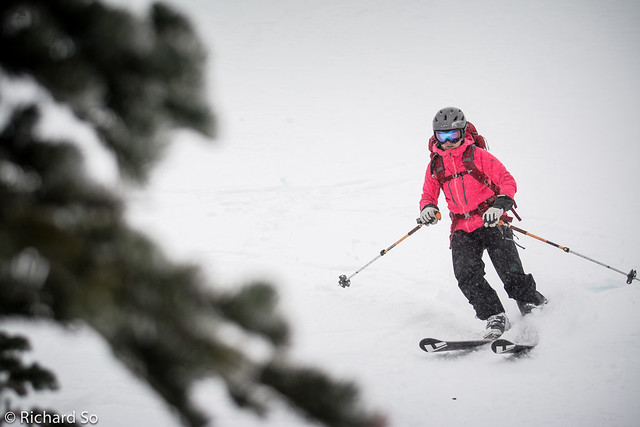 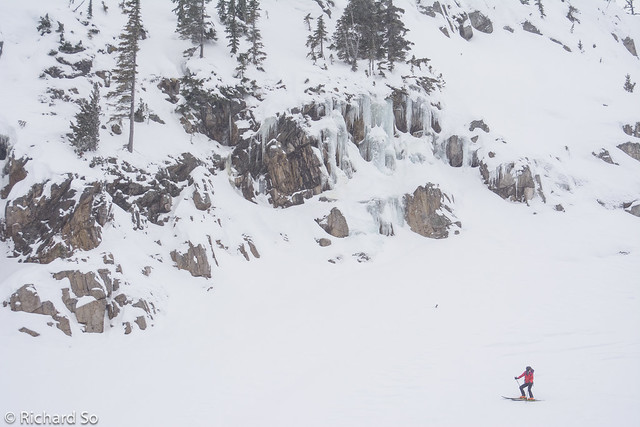 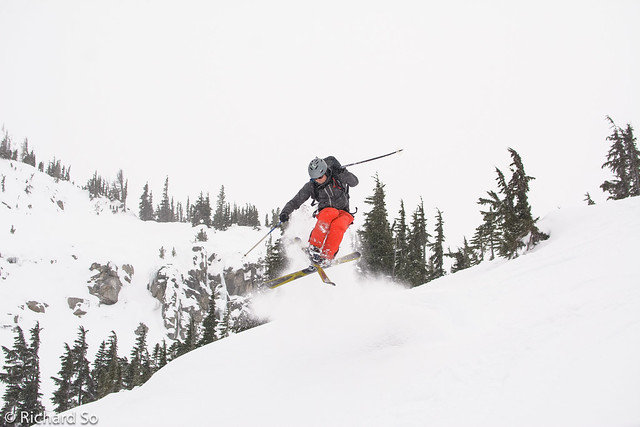 Back at the hut, rather early, I enjoyed a post-ski hop session, the non-exercising type. If you are planning to visit the hut in the near future, there is little firewood left up here as of early January. Fortunately, another group arrived later that evening, with firewood, and the cozy hut morphed into a dry sauna. 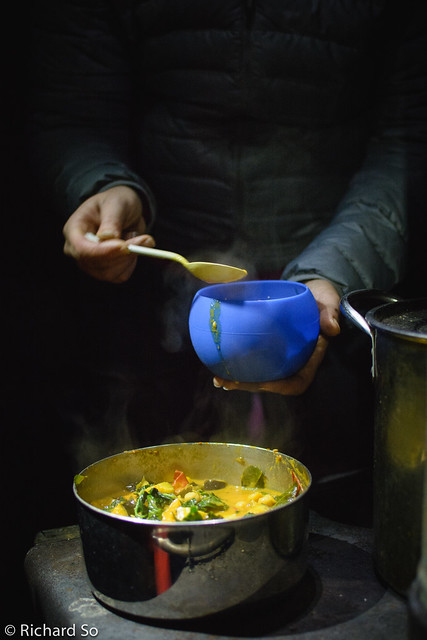 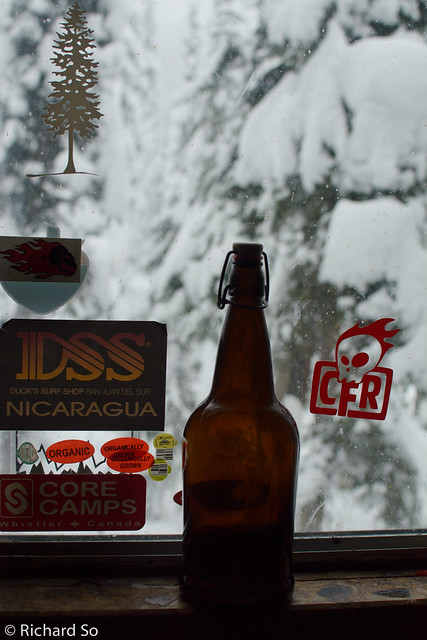 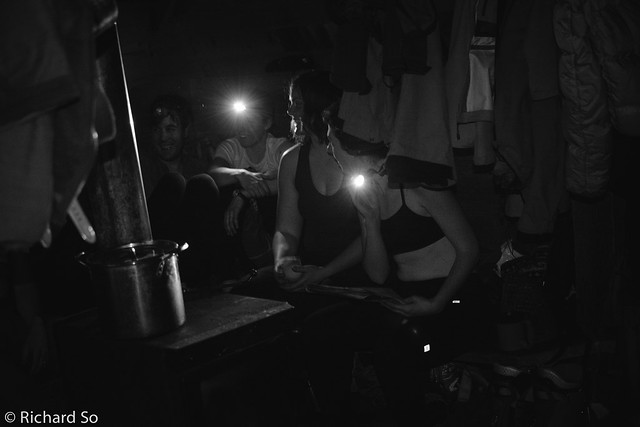 Light snowfall continued through the night, and I woke up to 15cm-20cm of snow outside my tarp-snowcave combo. For my setup, I use a sil-nylon tarp, which I used to cover up a trench dug in the snow, sometimes with snow walls stacked around. The corners are secured with my skis and poles, and the entrance is covered with snowblocks or a pack. Another pole is used to prop up the centre of the tarp to deflect snow to the sides. With careful construction, and minimal movement inside, I can stay comfortable, warm, and dry in non-stormy conditions. 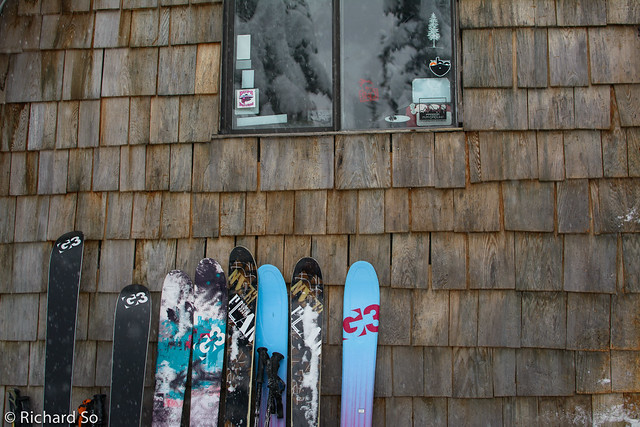 The rest of the group headed out that morning, some having to make their way back to Portland. Greg John and I decided to look for some skiing at treeline, and worked our way up the valley towards one of the avalanche paths below the Armchair Glacier. Travel was straightforward in the forest, but the slide alder in the paths were not covered. Everything had been tracked out from the week before, and the low density snow fall was not bonding well to the slope. Soft slabs up to 10cm thick were breaking off while turning up a switchback. Our highpoint was 1820m.

We skied back down to the hut, content with our one lap today. While skiing out from the hut, I noticed that every convex roll in the cutblock had naturally slid, with the 10-15cm of low-density snow propagating in a soft slab. Greg was able to trigger a slide on a road-slide slope, by simply throwing a snowball at it. In another instance, I walked up to the slope, whacked it with my pole, and the entire surface fractured. 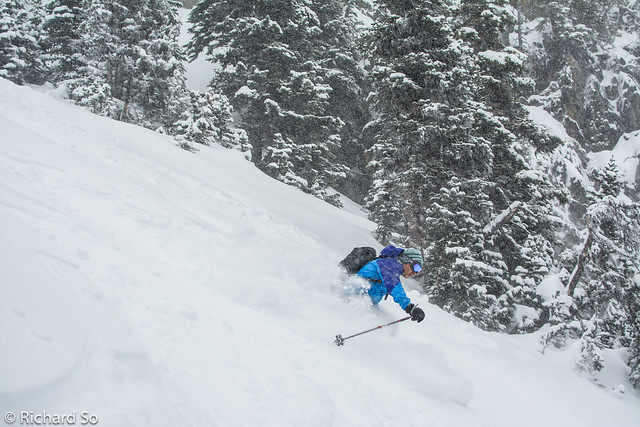 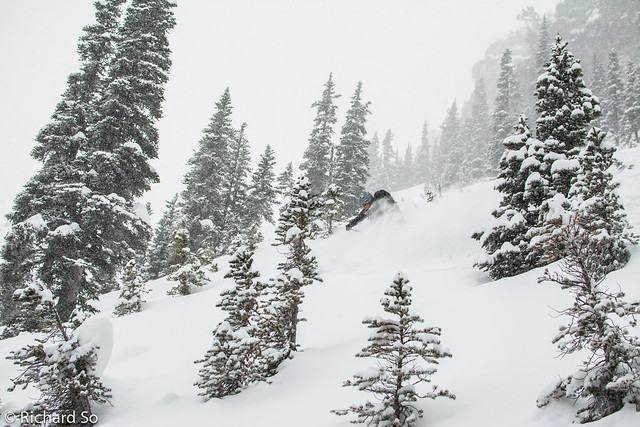 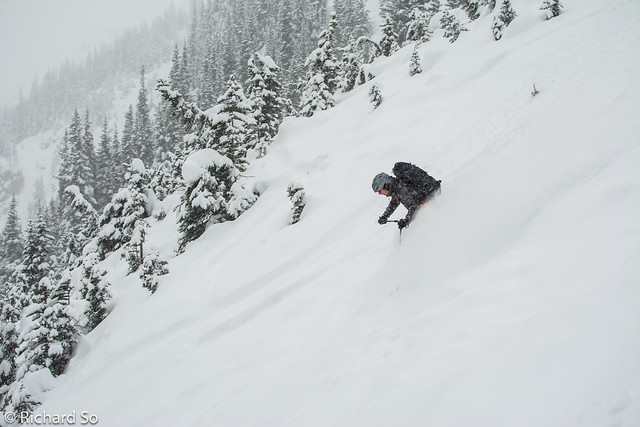 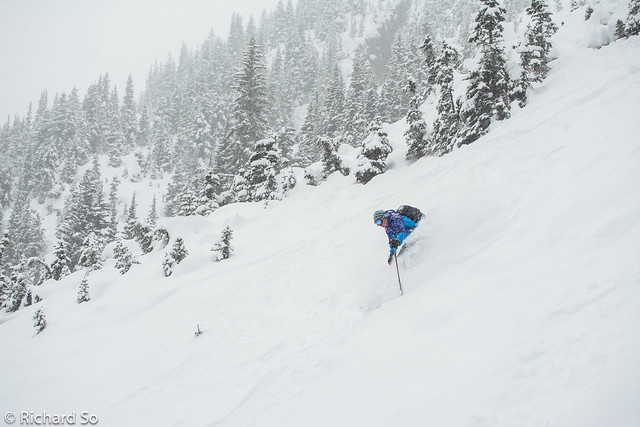 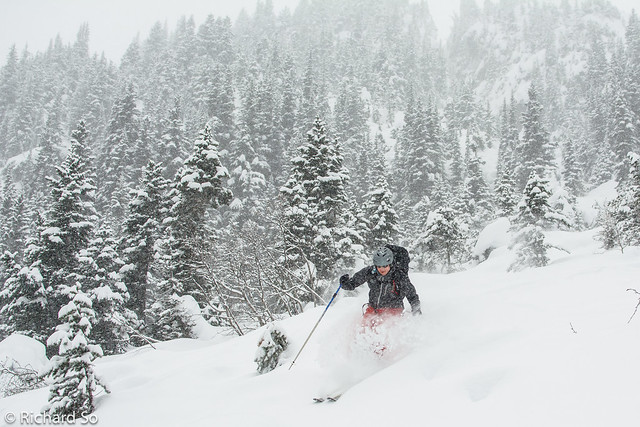 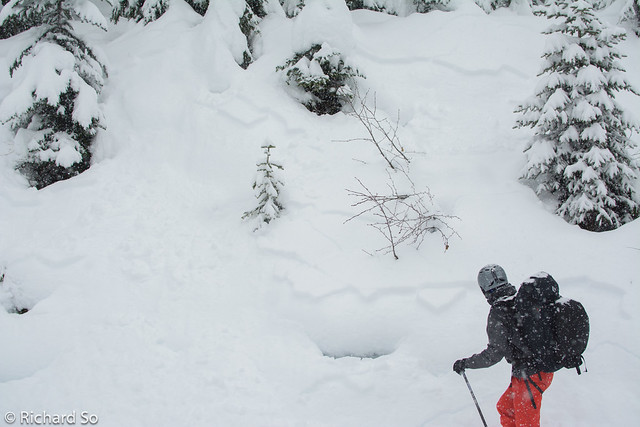 By leaving the hut early and skipping another lap, I was expecting to be back in Vancouver very early. Unfortunately, after a quick stop in Whistler, we reached the Sea to Sky parking lot just south of Function Junction. I heard reports of friends taking three hours to travel from Whistler to Squamish. The roads were snowy, and there were cars with summer tires struggling to climb the hills out of Cheakamus canyon. We turned around, headed back to Whistler, and spent the night at a friends instead. The next morning at 6am, we shoveled the car out of the driveway and drove back through slush and rain to the city for a two-day drive home from the Duffey to Vancouver. 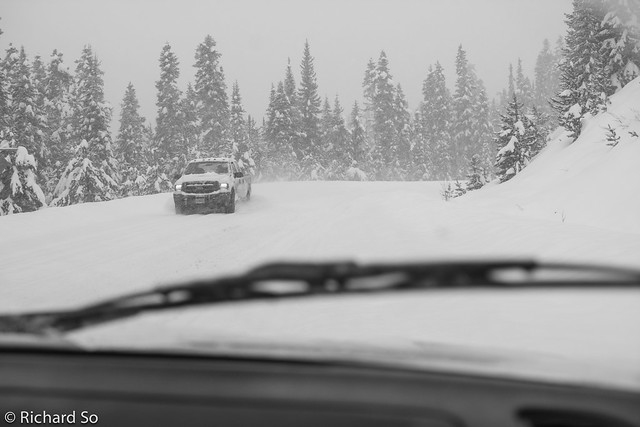 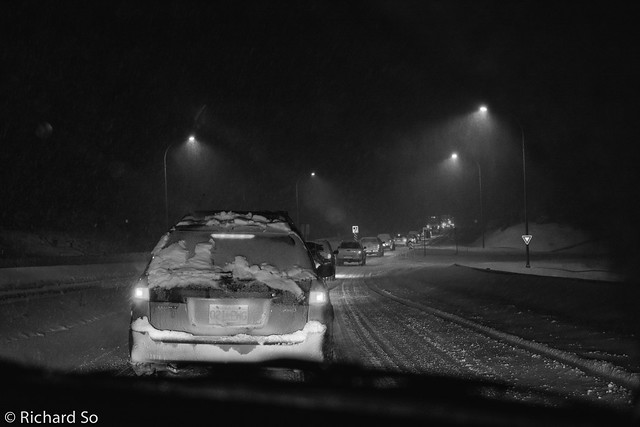 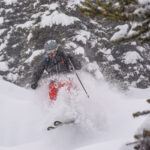