Ben, Jenn, Kristin, Mike, Amy, Al and I spent last weekend at Bowen Island for the annual Light up the Cove celebrations. Five years ago, the crew of Business Time stumbled upon the celebrations by chance on a winter cruise to Snug Cove and promised to return.

We departed False Creek on Saturday morning in heavy rain, sailing towards Point Atkinson with a 10 to 15 knot southeasterly. I drove most of the way over, with Jenn helping out with the one gybe,  while the more sensible crew hid down below in relative warmth and dryness. I was expecting a strong outflow in Howe Sound as we sailed past Lighthouse Park. Instead, there was just more rain, and light winds. Not surprisingly, there were only a few boats out, all motoring. Soon after we did the same. With the aid of the iron genny, Business Time motored into Snug Cove, where we tied up at the Union Steamship Marina just after 1pm.

We plugged into the shore power, and cranked the heater inside the boat. For the next two hours, we were tucked inside the boat, hiding from the rain, discussing the evening plans.

Photo by Mike S. A happy crew sailing in the rain. My yellow nylon pants are not stylish, nor breathable, or lightweight, but kept me dry in the downpour. 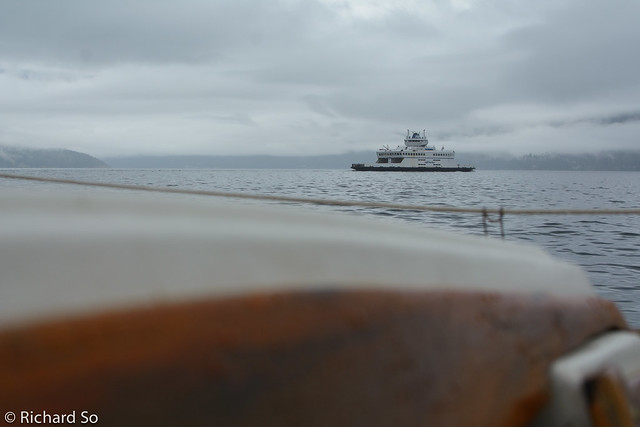 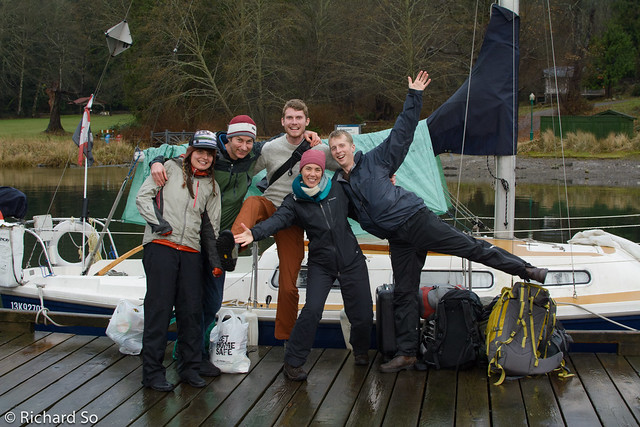 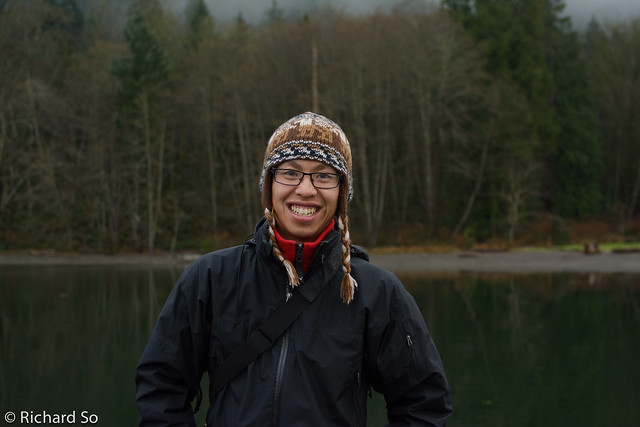 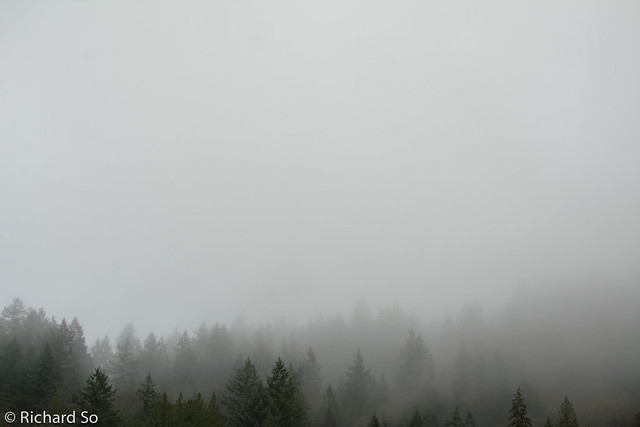 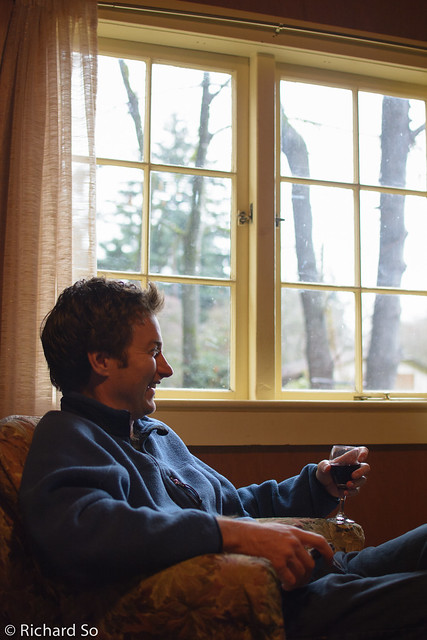 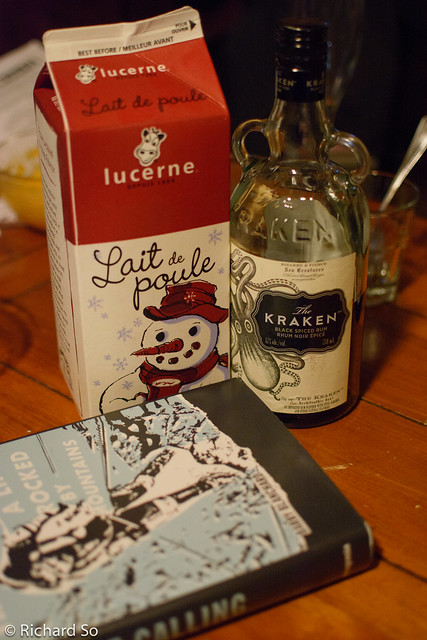 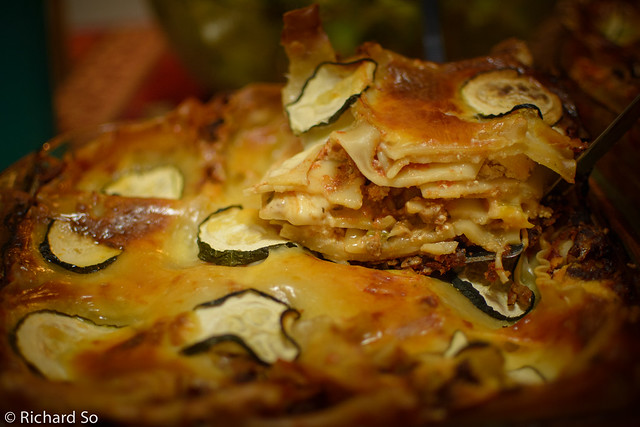 Hanging out inside the cottage. Normally we would sleep on the boat. Four somewhat comfortably, with a couple in the v-berth, and another two in the aft and side settees. Any extras slept on deck or on a hammock, which works fine in the summer.

Light up Bowen, and the Lantern Parade

The festivities start at Artisan Square, where we watch the Black Sheep dancers perform and listen to the carollers. The rain held off, and we joined the lantern parade down to Village Square, following in the footsteps of the Sugar Plum Fairy and the Gingerbread Man. I was without a lantern, but not without lights. A while ago, I ordered some battery-powered LED christmas lights and they were the perfect accessory, in addition to a spruce bough. 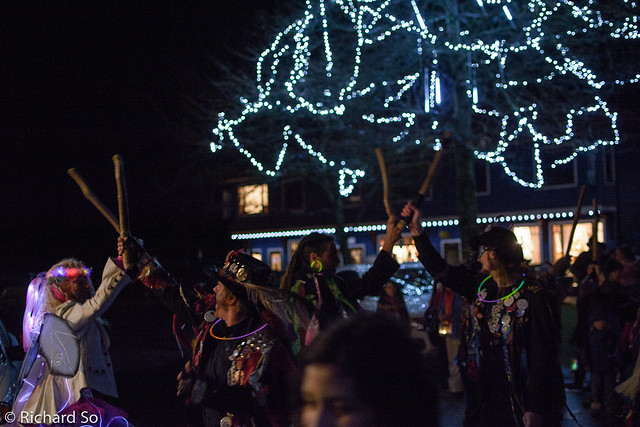 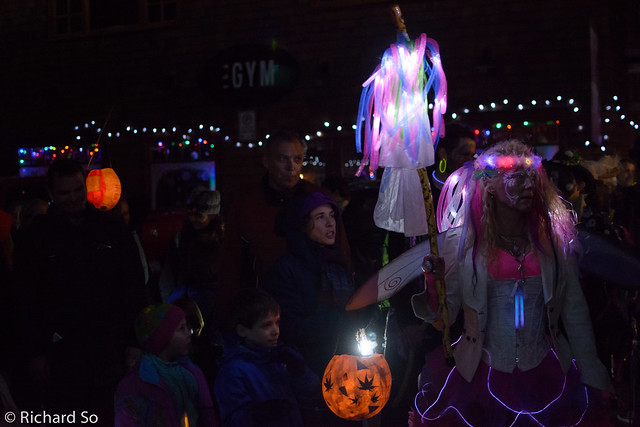 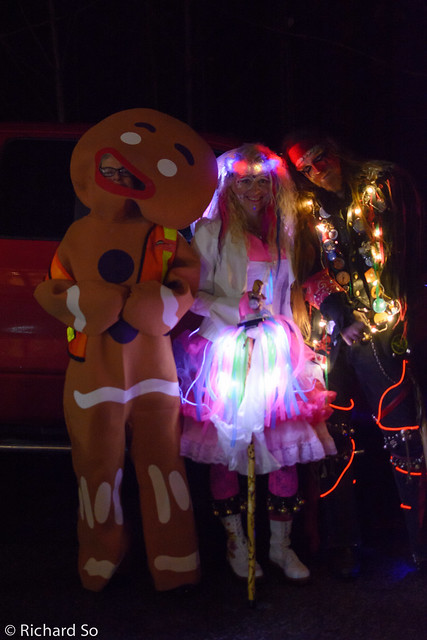 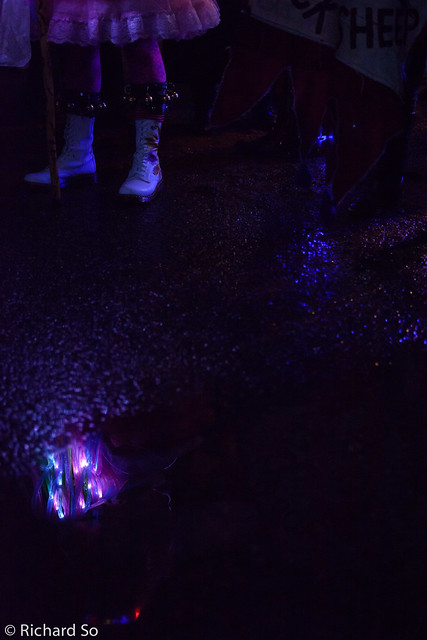 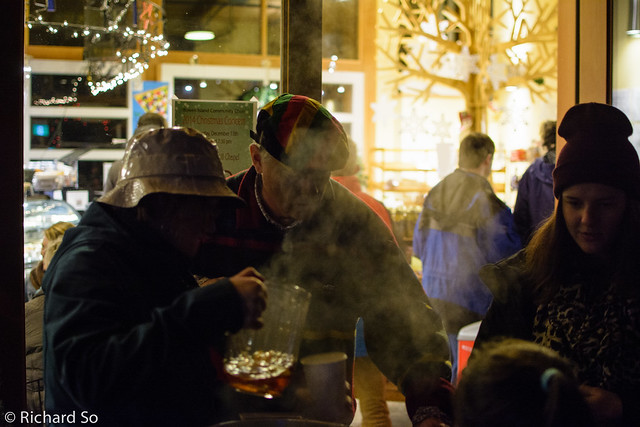 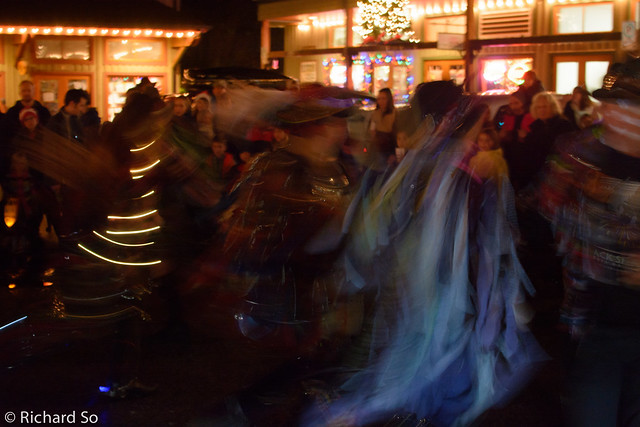 Down at Snug Cove, we watched the cannon fire (ball-free!), pointed up Bowen Trunk Road. We wandered down to the dock, where we listened to more christmas carols on Business Time. And then Santa arrived in style on a tugboat, waving to the crowds gathered on the grass in front of the Union Steamship gift shop. He took a look at the crew of Business Time, Ben in particular with christmas lights and a Palm Bay in hand, and announced that we were on his naughty list. I expect a lump of coal onboard Business Time’s imaginary chimney for Christmas now. 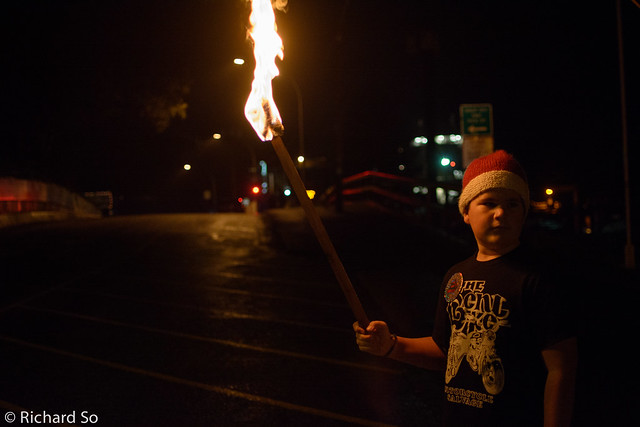 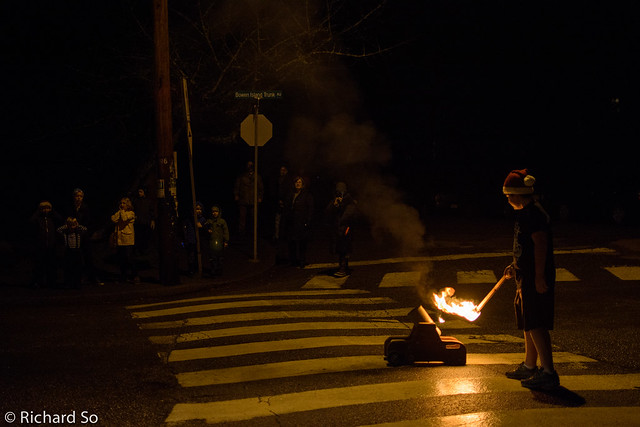 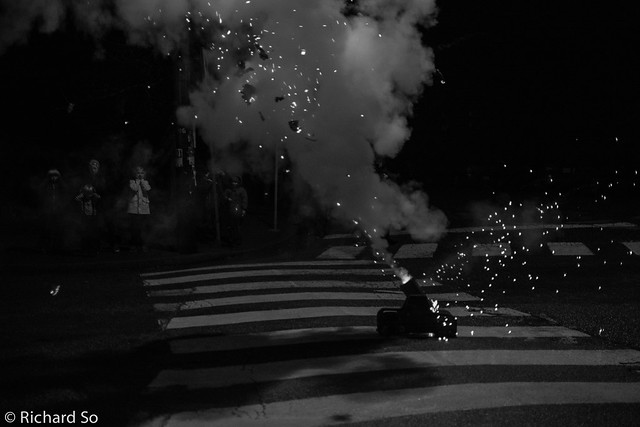 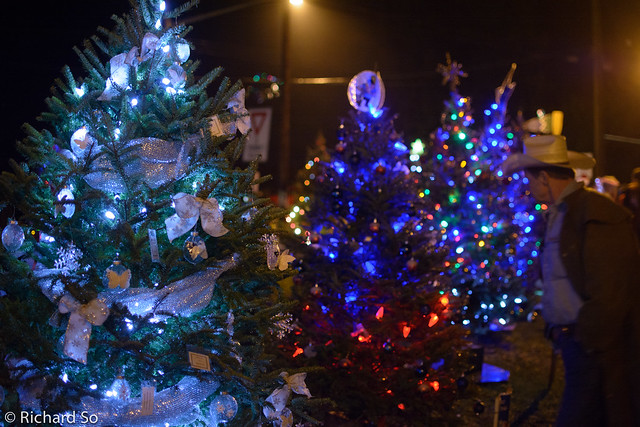 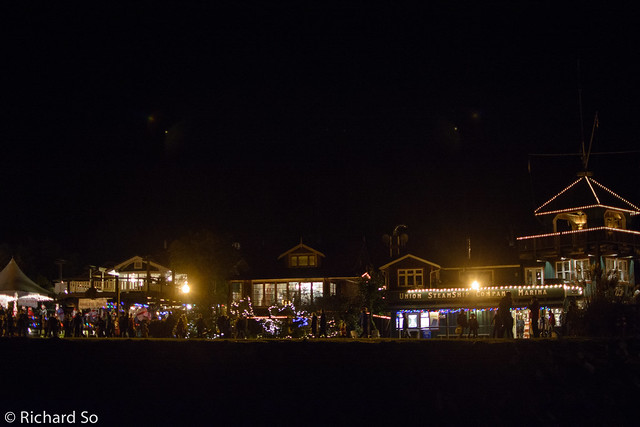 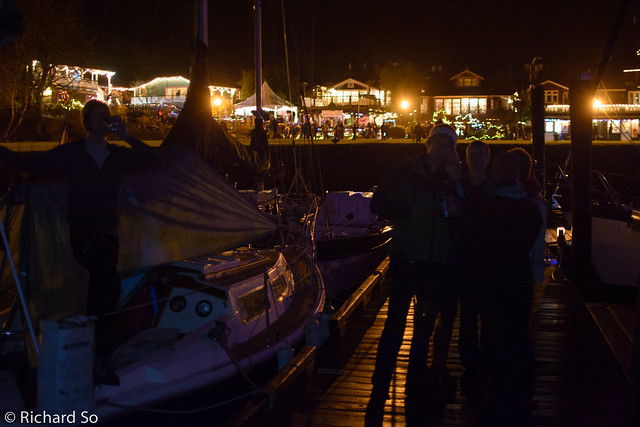 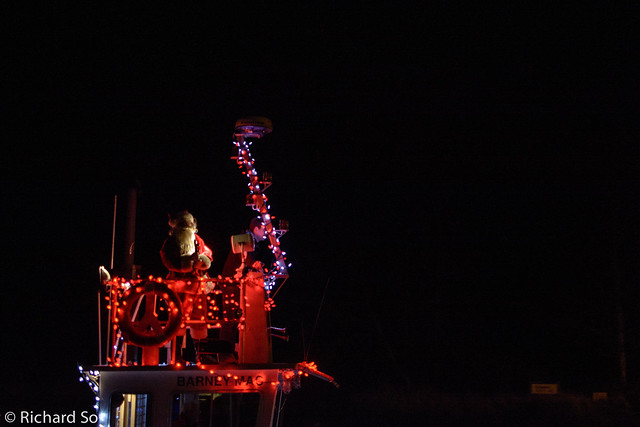 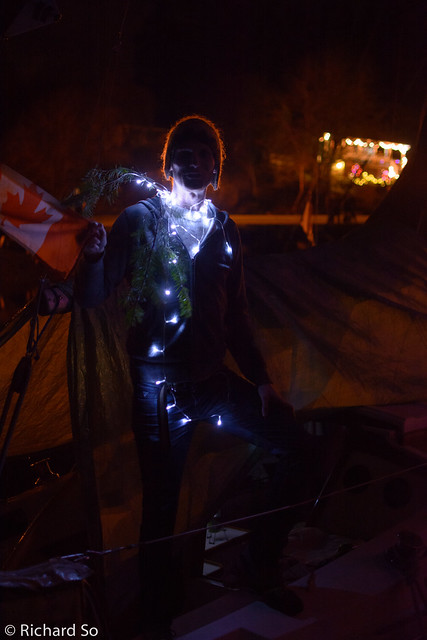 Sailing Home
As forecasted, the weather was beautiful on Sunday. Dry, slightly crisp air, and warm for December. It will be a while before ski conditions improve on the North Shore Mountains, judging from the photo below, and the rain that fell this past week. 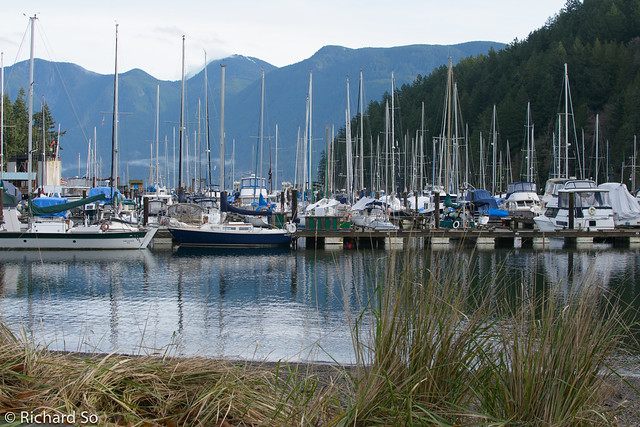 In the winter, strong outflow winds are common in Howe Sound. The wind speed at Pam Rocks (roughly halfway between Bowen and Squamish) reach thirty knots and higher.

We motored out of Snug Cove, and caught the tail end of the outflow winds as we rounded the corner into Howe Sound. Mike and Amy took the ferry home, but that gave Mike a chance to take this awesome shot of Business Time sailing home. 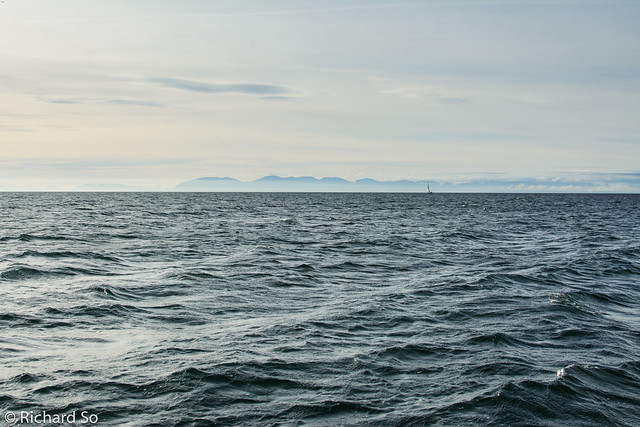 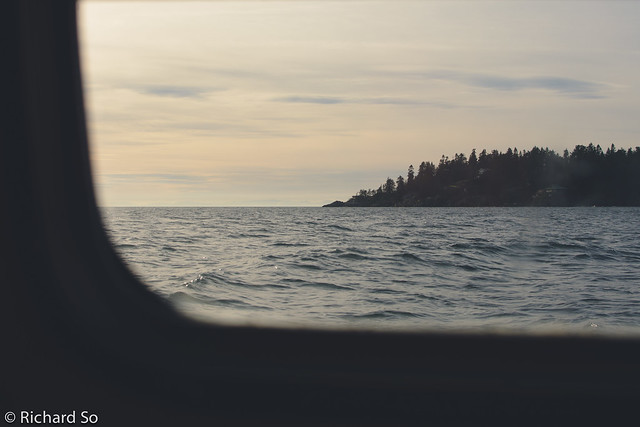 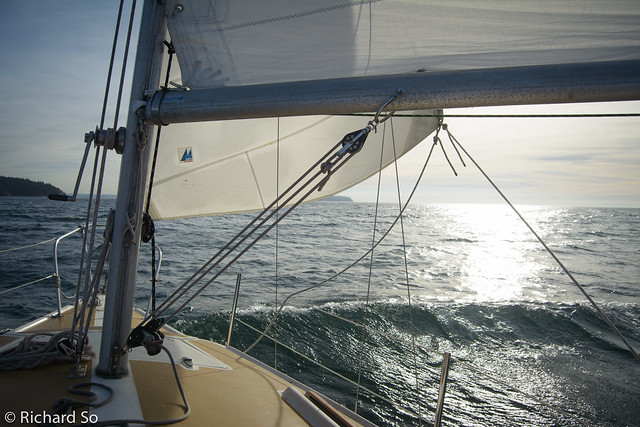 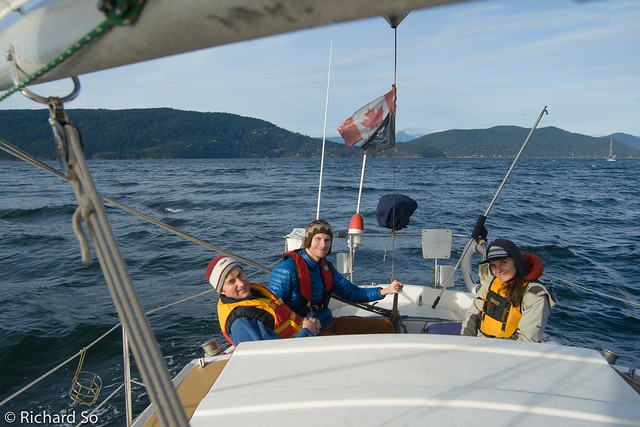 The wind faded as we approached Point Atkinson. We jumped off the boat for a quick swim. Actually swim would be an exageration. The sequence was more like, jump off boat, feel the shock of the cold water and climb quickly up the swim ladder. There’s nothing quite like a refreshing ocean swim in the winter. 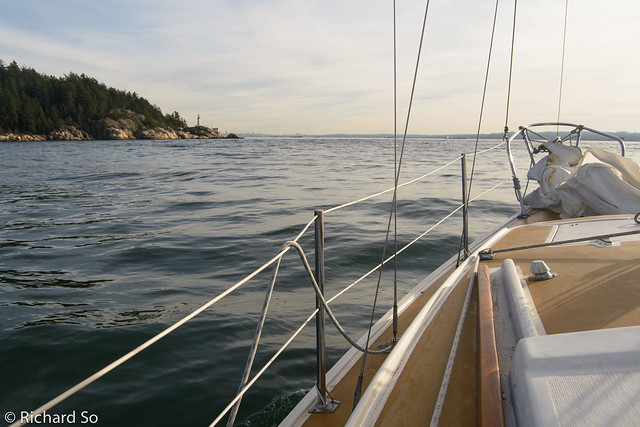 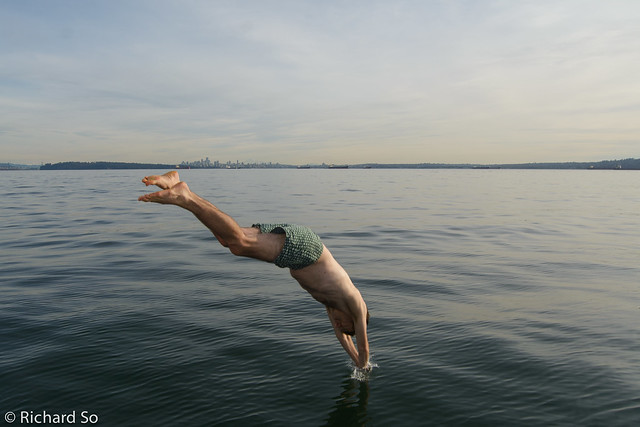 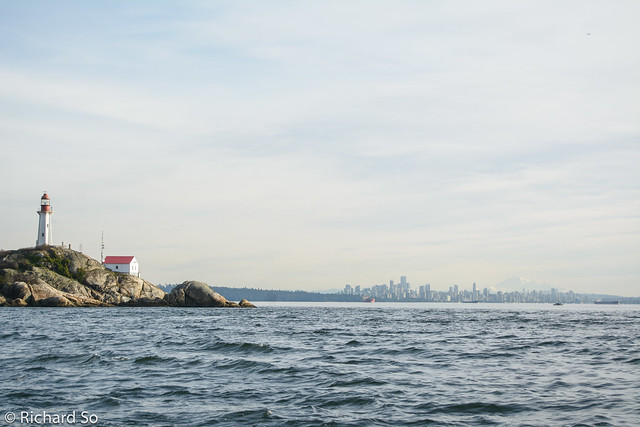 We motored the rest of the way home across the still glassy waters in English Bay.

Can it snow now?

More of my photos
And from Mike S.