Skip to content
Note. The gate is currently locked. The BCMC has a key, which is only available for organized trips by BCMC members.
The Mountain Lake hut area is a spectacular spot, just south of Squamish. Access is tricky though. The problem is a gate off Highway 99, visible from the road at the top of the Furry Creek hill that can be locked sometimes. It was open most of this summer, but the latest report (Oct 3, 2014) says that it is now closed, which is unfortunate. But assuming the gate is open, one can drive 9.5km to Cynthia Creek with a good vehicle. There two or three hills with loose sections on the way up that will stop most small cars, and a few water bars near the end of the road. It is also possible to get onto this road from roads down by the Furry Creek golf course, but there are also gates down there. 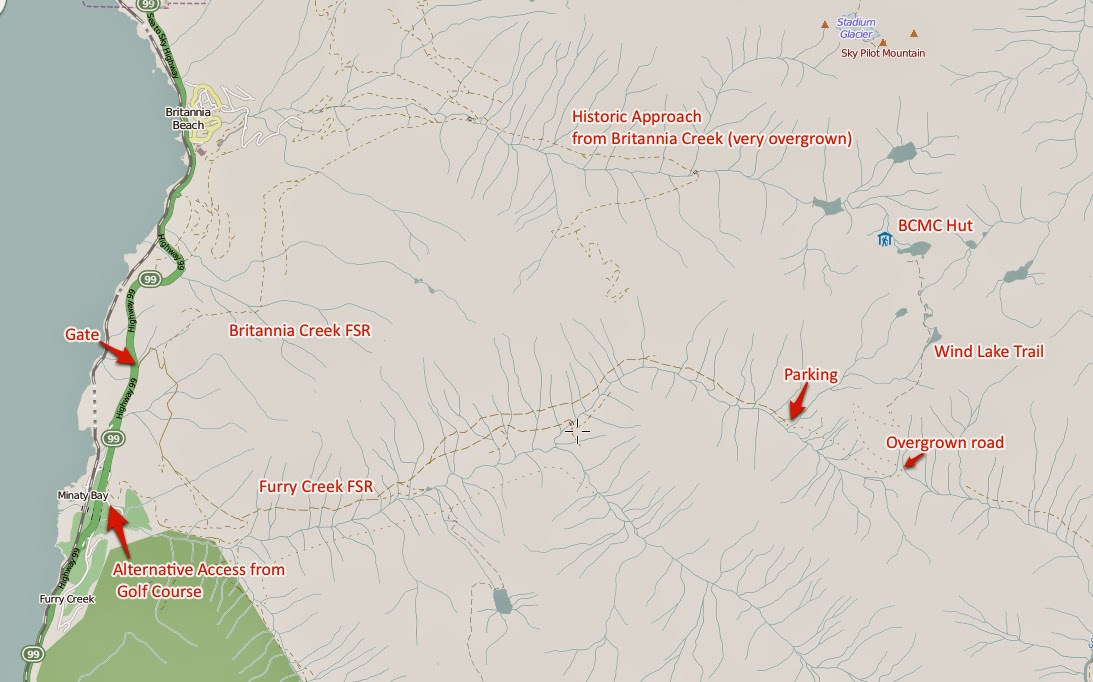 From Cynthia Creek, continue another 2.5 km along the road until a large cairn marks the route up the now-overgrown but brushed out Cynthia Creek spur. After gaining most of the elevation on the road, the route traverse west towards Wind Lake, across trees and and a boulder field.
My first trip to this area was in November on skis back in 2005. There wasn’t quite enough snow to cover up the water bars on Britannia Creek, which made for slow and tedious travel. By the time we skinned to the end of the Cynthia Creek road, the weather had deteriorated into a full-on fall storm. We didn’t make it much further, after a group mutiny where we came to our senses and decided that pushing on, with a large group of beginners didn’t make sense. I stopped to take off my ski on every water bar going down the Cynthia Creek spur. There was just enough snow to skin the road, but not enough to bridge the gaps. A couple friends stayed behind that night, setting up their tent at end of road with a plan to scout out the route ahead in the morning. Instead, they woke up to 30cm’s of wet snow blanketing the tent, and they retreated back down the road.  I’m glad we turned around that day. Sandra, who was co-leading the trip, stopped to put on a down jacket while waiting for me, and Dan to get down. Dan has refused to make another trip to Mountain Lake ever since. Hopefully this post will convince him to try again.
Ben Lomond

Alex and Maddy joined me for this trip, along with Greg and Lisa who met us at the hut later. It was also Alex’s birthday. Beers, mountains, and lakes were the theme of the trip. We walked past Wind Lake, scoping out a rock that would make for a good jumping spot later. We hiked up the col between Ben Lui and Ben More, and continued east along the ridge towards Ben Lomond. It’s possible to follow the ridge the entire way, scrambling rock steps along the way. In the spring, the ascent is a steep snow climb. Being September, we were able to hike up the talus, and then ascend steps into a short chimney. 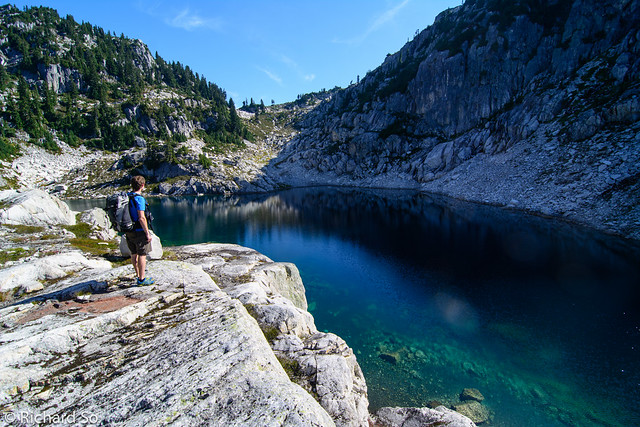 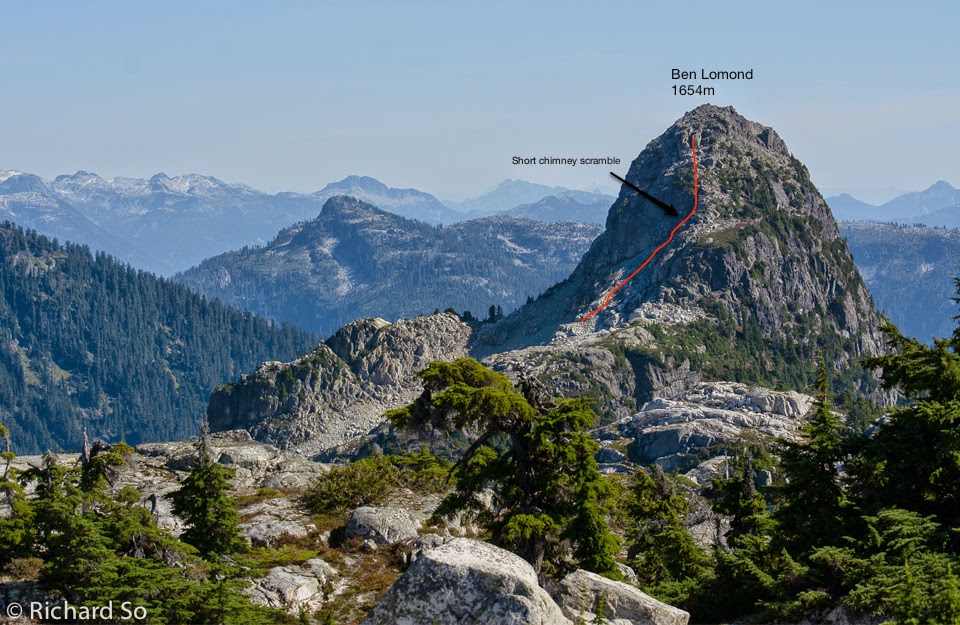 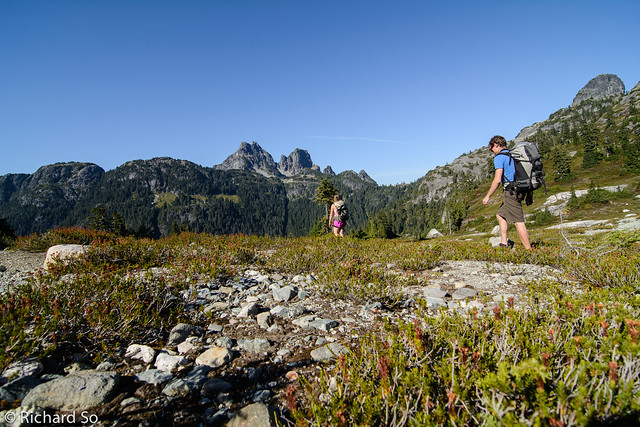 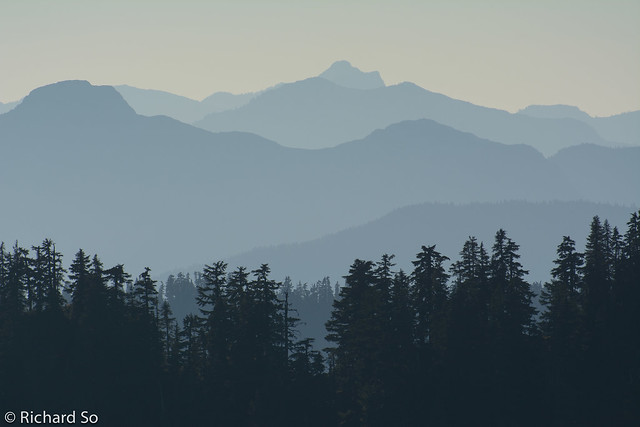 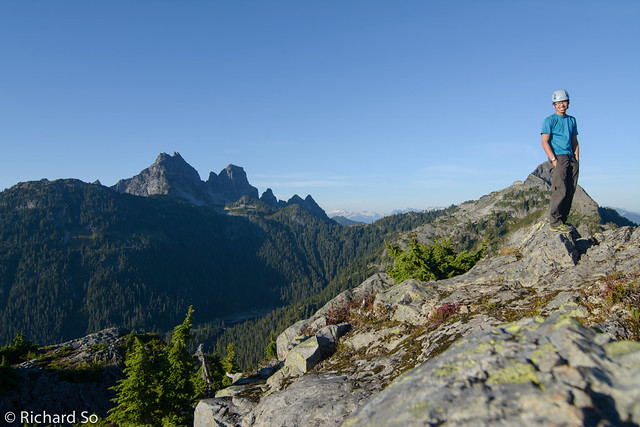 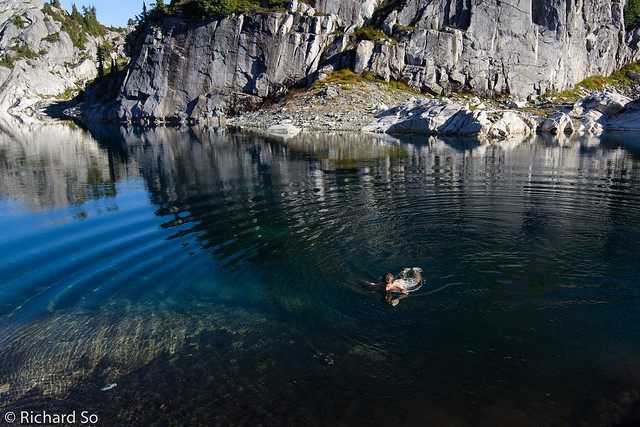 The Mountain Lake hut is a simple wooden arch hut, built and maintained by the BCMC. There are two foam cushions upstairs, and with enough space to sleep four. It was warm and the bugs were gone, so I slept under the stars. We had high hopes to catch a glimpse of the Northern lights, a rare treat around here. It’s not too often that these three things, a solar flare, clear skies, and a weekend happen together. We were unlucky tonight, just like the rest of Vancouver. The moon came up at midnight, ending any chance of seeing the aurora. For the night shots below, I was using a wide angle lens, attached to a mini tripod. I used a relatively short exposure (15 to 30sec), large aperture (f2.8 to 4), and high ISO (2000 to 4000). 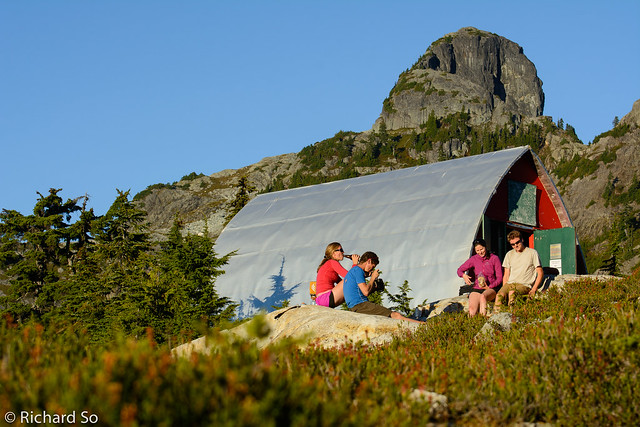 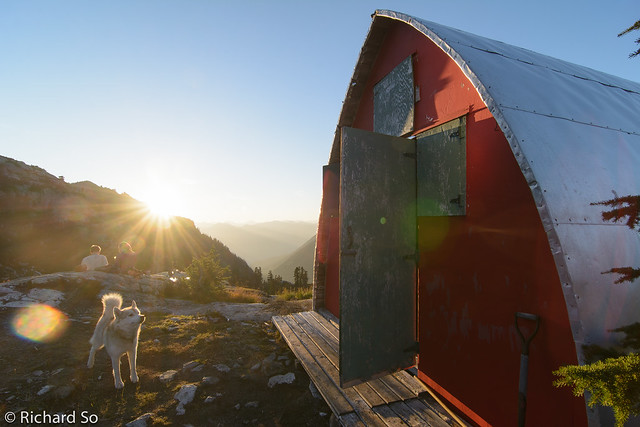 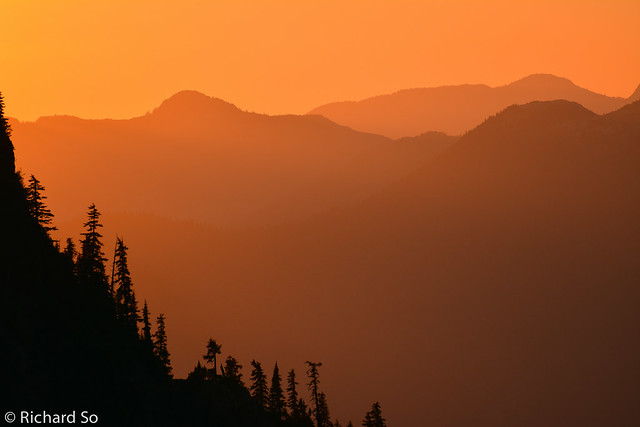 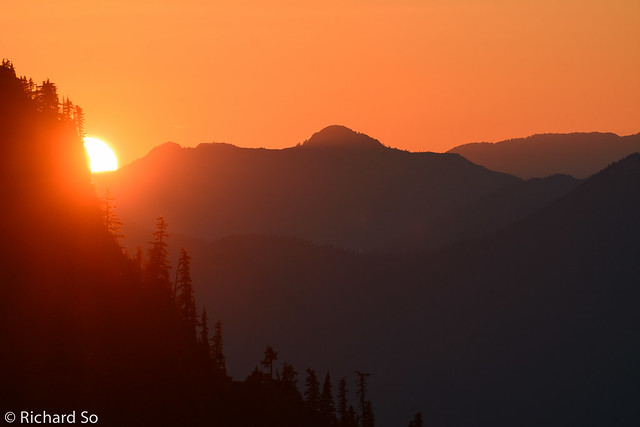 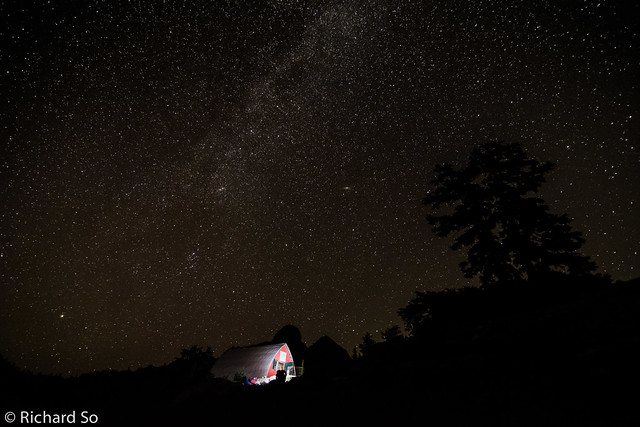 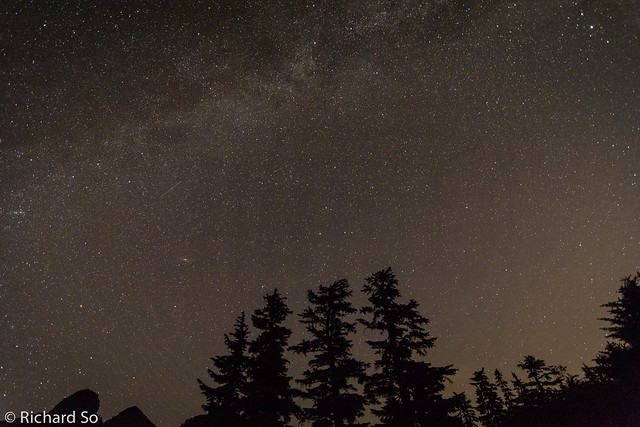 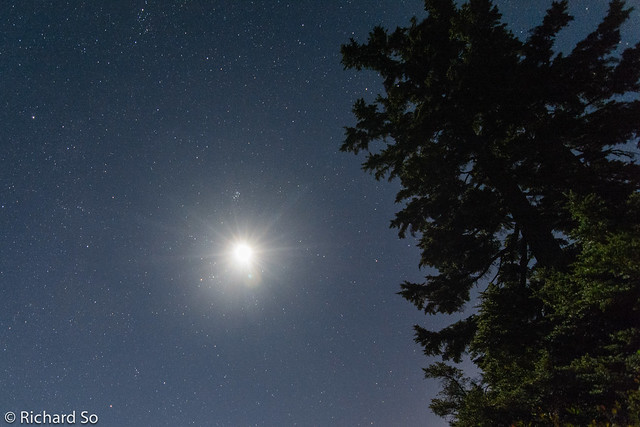 The next morning, we hiked north, contouring around Mount Sheer, then following a ridge north to a scree filled basin below Ledge Mountain. The clean granite around the Mountain lake area does not extend into the Sky Pilot group, which is mostly choss. The objective was the 3rd class ledge route on Ledge Mountain. The other obscure peaks nearby, like Ledgling, the Ledgelette, and the Nai are 4th to low 5th, on loose rock. 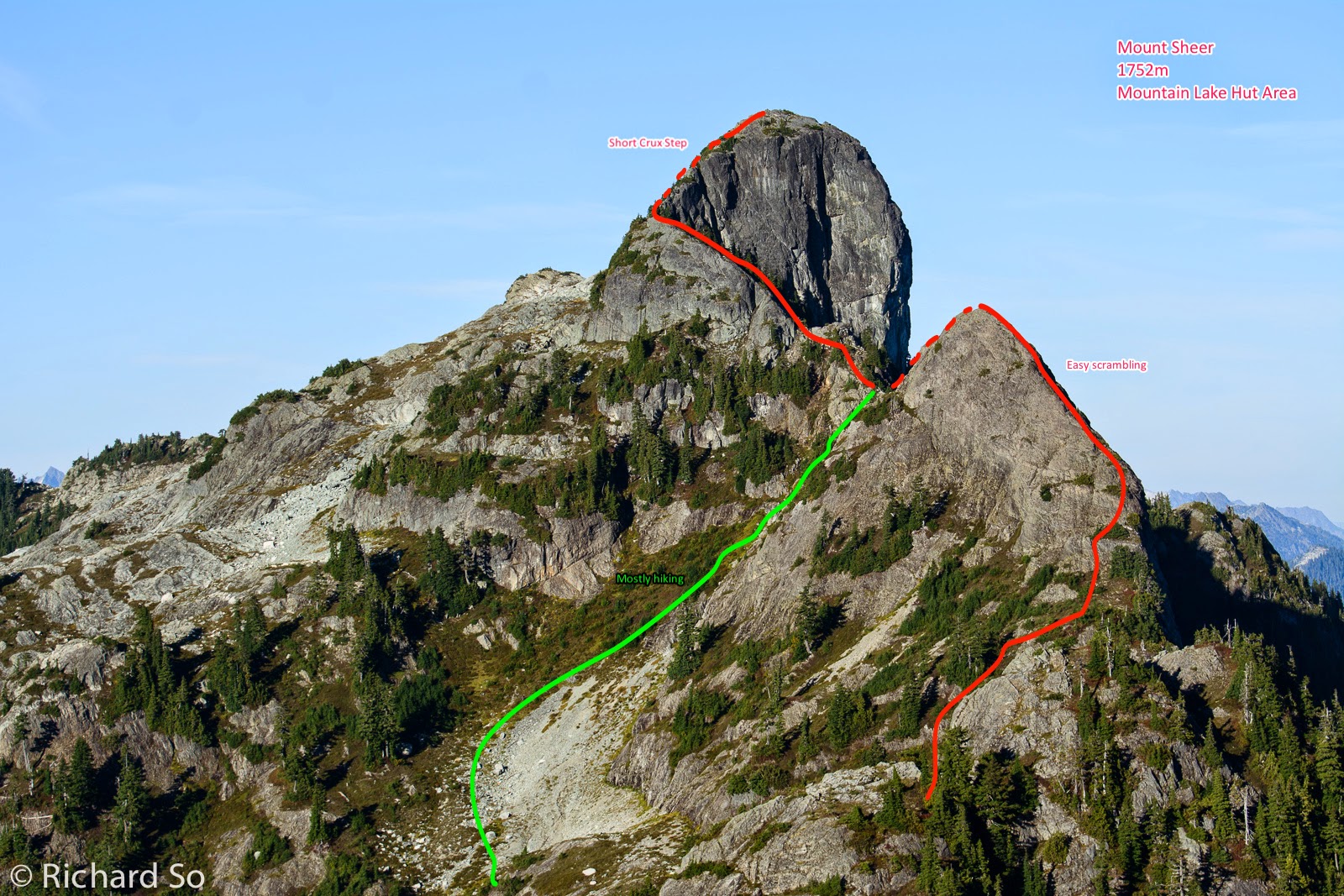 For Mount Sheer, the best route from the Mountain Lake Hut is to follow heather slopes up towards a heathery knoll. It’s not visible in the photo above. From the top, follow a krummolz covered ridge down to the col and then follow the red line above. There is enjoyable scrambling up the subsummit, down to the col, and then up the summit. The hardest move is a short 4th class step on good rock with little exposure, just below the top. The alternative route ascends heather slopes (green line) to reach the col.

For Sky Pilot and Ledge Mountain, head part way up the talus and heather slopes at bottom centre, and then climb up and left to gain the bench at mid-left. Continue north to reach the scree basin below Ledge, hiking up and over two bumps along the way. 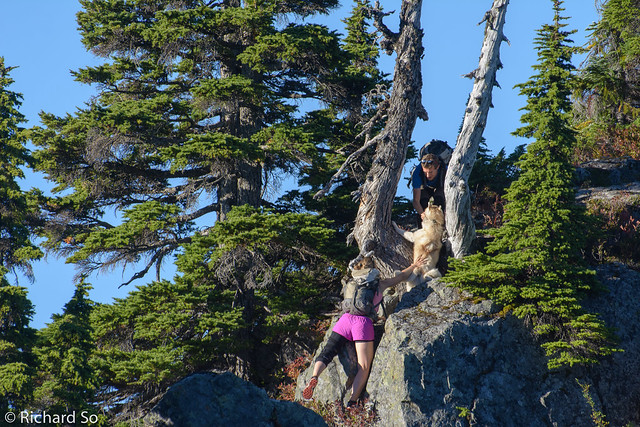 Alex and Maddy are slowing training Harrison to become a mountain dog. He needs a few lessons from a mountain goat. 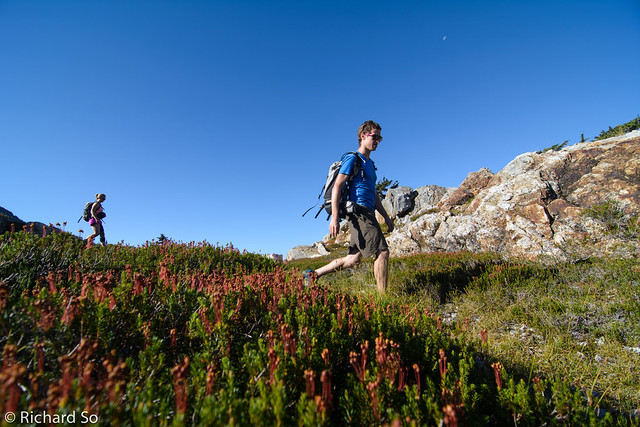 Alex and I hiked up the talus cone  at the base of Ledge Mountain, which changed into loose scree ontop of firm soil halfway up. Upward progress was tedious, a step down for every two steps upwards. Don’t forget to bring a helmet.

Near the top of the scree slope, traverse right towards trees. The crux is a 5m rock step to gain the ledge. It’s easy climbing, but I didn’t trust the rock. The ledge is an interesting geological feature on an otherwise sheer face of crumbly rock. The worst part is half way up, where the ledge slopes outwards by a few degrees, with scree and gravel covering the path. The ledge ends before the summit, where a short bushwhack between stunted trees is required. 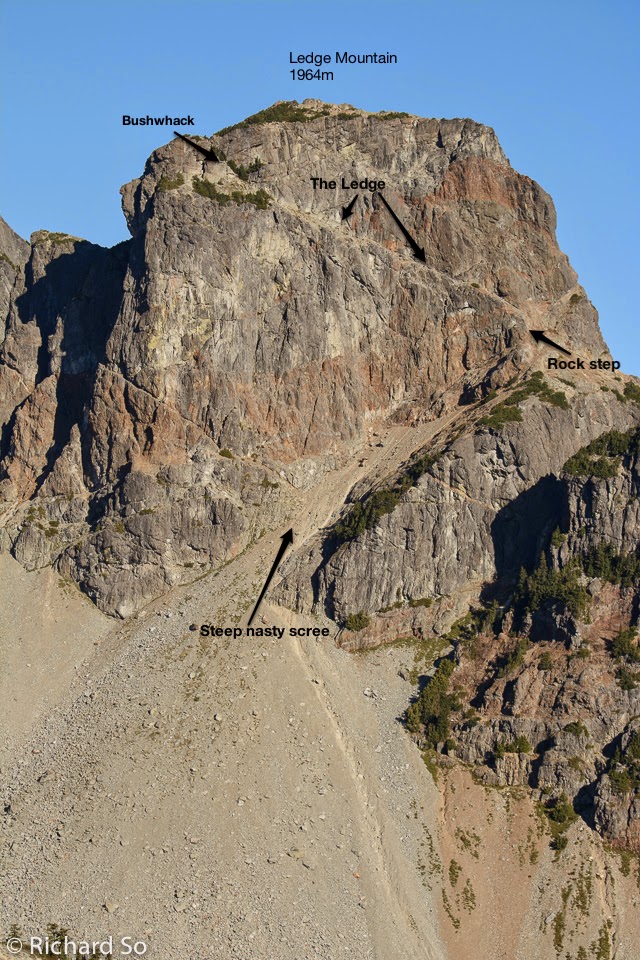 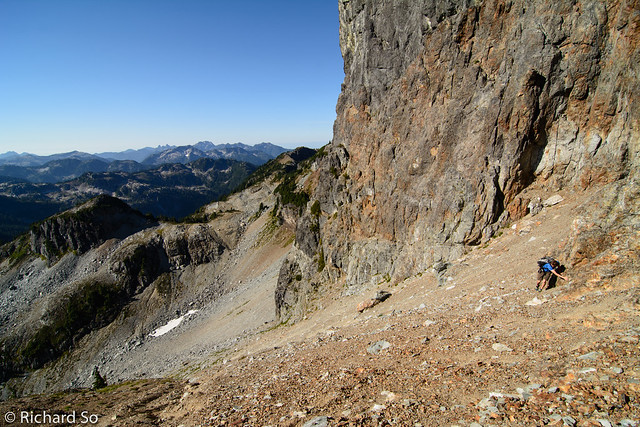 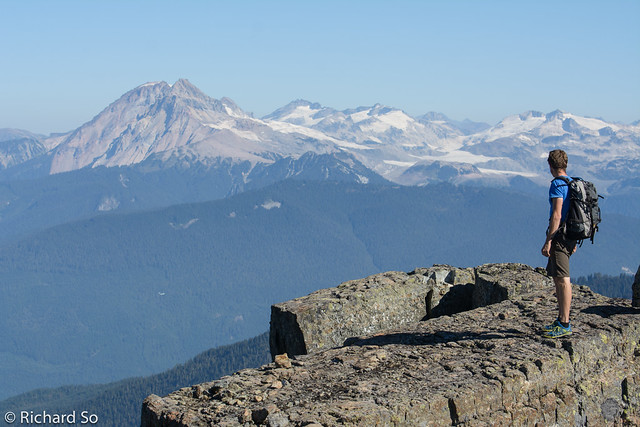 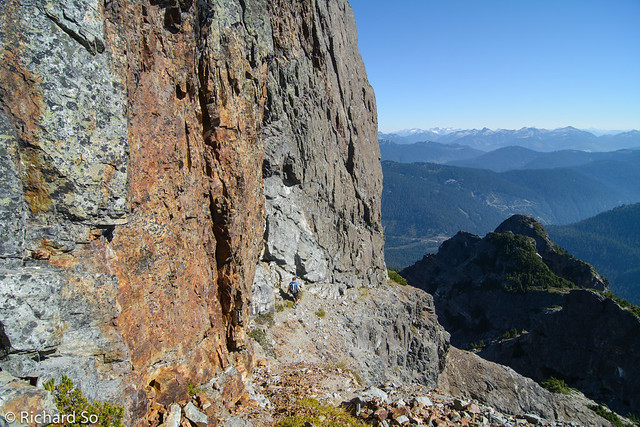 A short drive from Vancouver, craggy summits, alpine tarns, and granite slabs makes this a great spot for a weekend. Let’s hope the access improves in the future, and more people get to enjoy this area.

From the BCMC website
“Note regarding a key to Mountain lake Cabin: No key required for the cabin. If the gate at the road is locked people will have to contact the BC Forest office in Squamish to find out what contractor is working in the area, get their contact info, contact them for access. Usually there is a sign at the road stating what contractor is working in the area. Or not.” 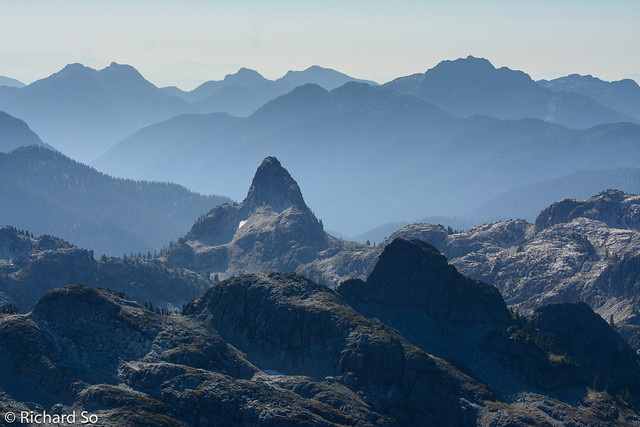 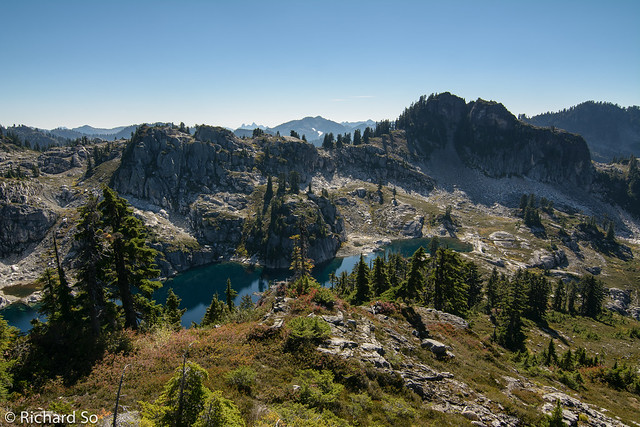 Mountain Lake, with Ben Avon and Ben Vorlich above. 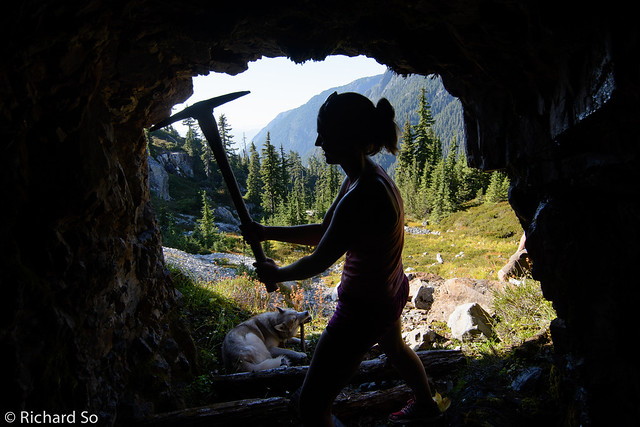 Exploring the old mine shaft below Mountain Lake. 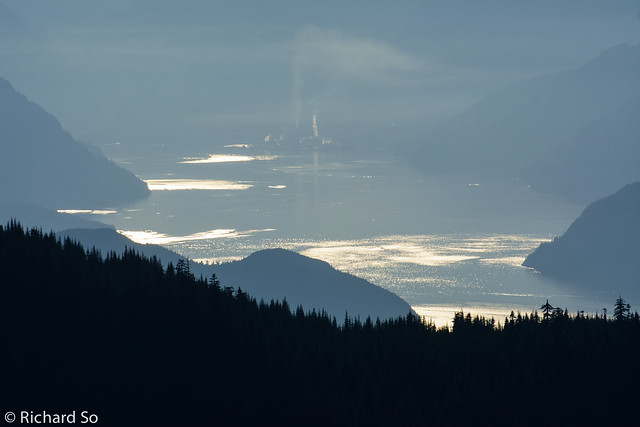