Note: I’ve described this trip taking the exit out the Gravell Creek, via the upper roads and NOT the cutblock. A better option now would be to take the new trail on the west side of Currie that drops down to the Green River Bridge. You will end up hiking down barely snow covered boulder fields, but that is better than a long snow-free valley bushwhack.

The days are getting shorter, it’s wet and rainy outside. The high alpine is covered in a dusting of snow. It’s ski movie season, real skiing is just around the corner. Here’s a throwback to a trip that I did back in February 2013 with Bram, where we headed off on skis from Blackcomb to Mount Currie, and down to Pemberton. Summer and winter are chaotic for me, I’ve saved this one for a rainy Fall night to write out. I can’t wait for more fun adventures this winter on the South Coast. 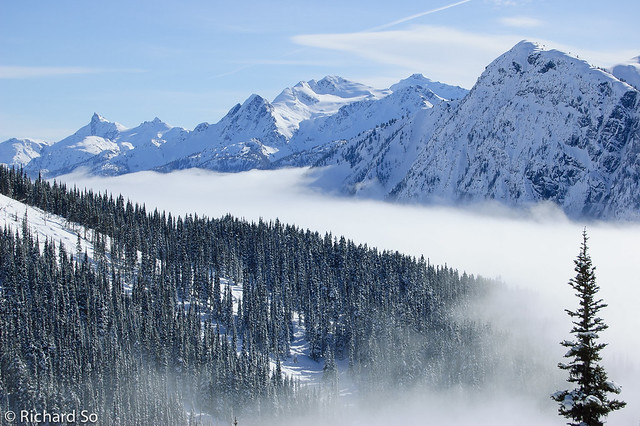 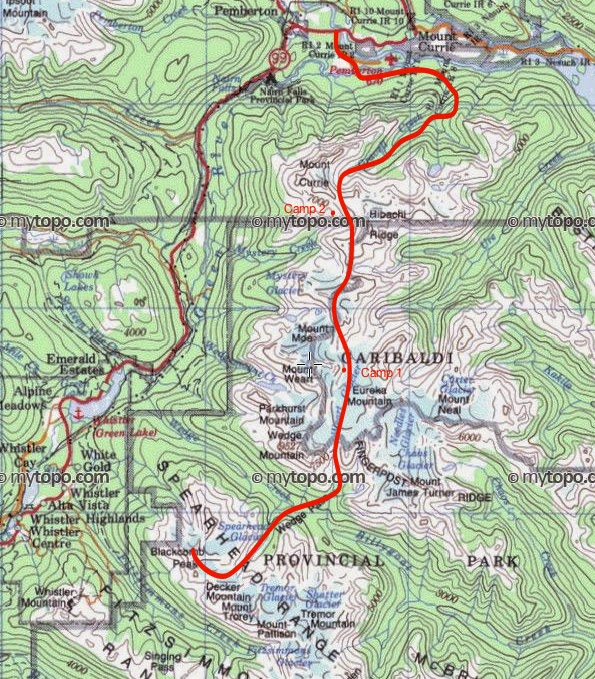 “Hi, is this Whistler taxi? Can you pick us up from the Green River bridge?” Bram and I drop our packs by the side of the road in the fading daylight, and wait for the taxi to arrive. Three days earlier, we left Blackcomb on skis, heading away from the crowds and into some lesser travelled terrain. Crowded is a relative term around here. Some places are always busy, like Whistler and Paul Ridge. But going one valley further, over the next pass, and suddenly it’s just you.

The Blackcomb-Currie traverse takes a high line through the northern section of Garibaldi Provincial Park. The start of the journey is the easy part, with a ride up the chairlifts on a one-way backcountry lift ticket. Beyond the gates, it’s pure alpine bliss. Leaving the crowds on the Decker glacier, the route continues down into Wedge Pass, around Lesser Wedge, down the Weart Glacier, over to the Mystery Glacier and into the basin south of Mount Currie.

The crux of the traverse lies in the exit, a long descent out Gravell Creek, complete with flat valley bottoms, creek crossings, and steep cutblocks. The alternative? A steep ski descent of one of the couloirs on the 2300m north face of Mount Currie.

The ski conditions were prime for a traverse. January was a dry month, with some rare sunny days. The drought extended into February, with a three-day window centered over the new Family day long weekend. Time to spend it in the mountains. 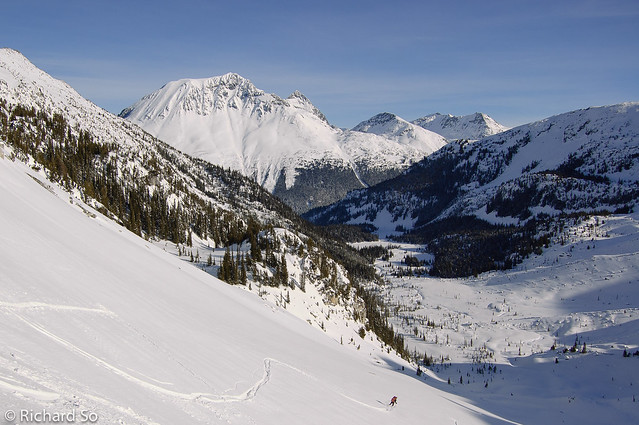 Skiing down into Wedge Pass, it was just the two of us. Greg and his other friend were following our tracks behind us, but we wouldn’t see them until the end of the first day. Bram has done the traverse once before. I was happy to have his knowledge of the route, and the exit.

They were planning to sleep, then leave early to ski the Pencil Couloir on Currie. This plan worked for us. I could sleep in, and then follow their tracks to the base of Currie. I curl up into my lightweight sleeping bag, under the tarp-covered snow pit, with a belly full of couscous, bacon and blue cheese. 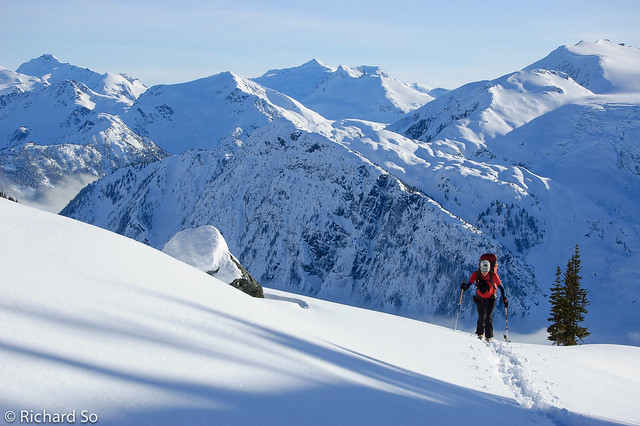 View towards the Mcbride Range, with Nivalis at left, and Mount Sir Richard at centre. Endless mountains to explore. 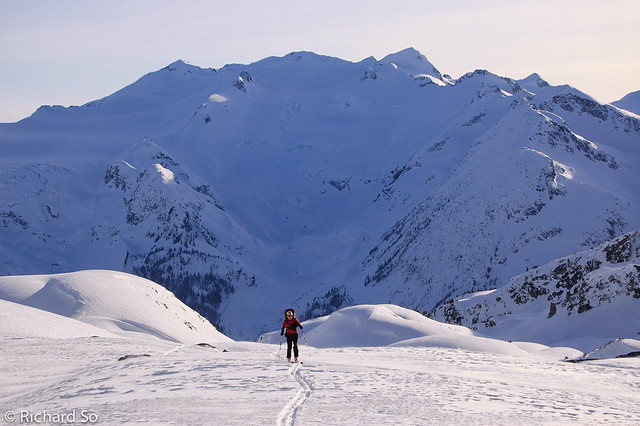 Shatter and Shudder Glacier. Tremor Mountain, at centre right, is the highest peak on the Spearhead Rang. 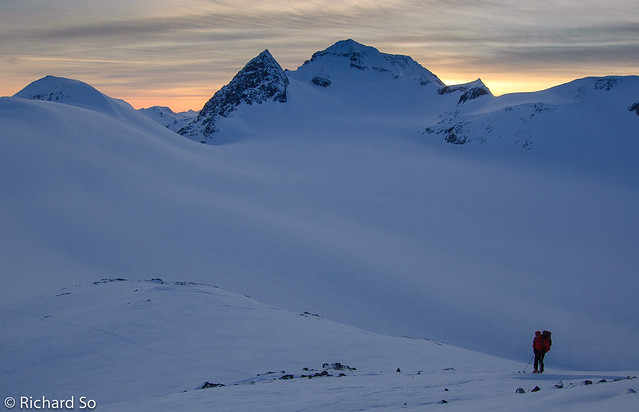 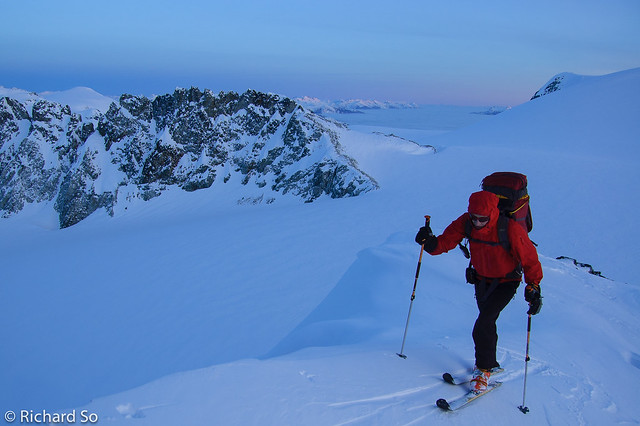 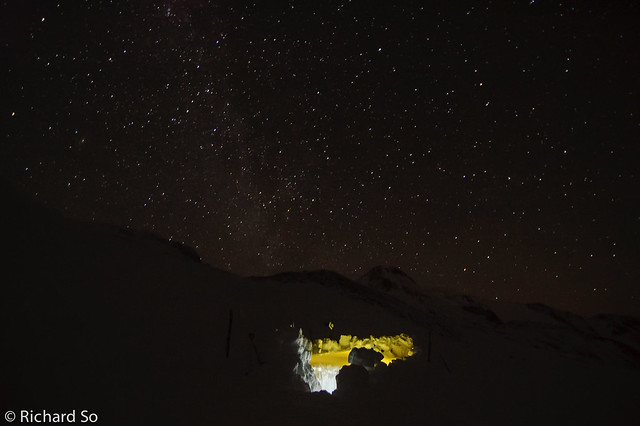 Starry night on the Weart Glacier. My new camera does a much better job with low-light high ISO exposures. All the images here were taken with my old Nikon D50.

The highlight of traverse was the second day, covering new terrain towards Mount Currie. We leave camp shortly before sunrise. I was awe-struck with the alpenglow painted over the north face of the Owls and Weart. It was a skier’s dream. Couloirs and steep face. A blank canvas waiting for a ski stroke. I gaze up at them, wishing I was up there. But not today. There was a crown line on the central line. Barely bridged bergshrund on the left couloir. And blue ice on Weart’s north face. There will always be next time. 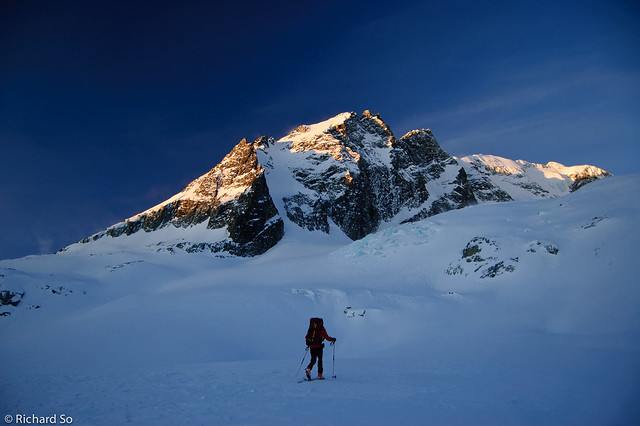 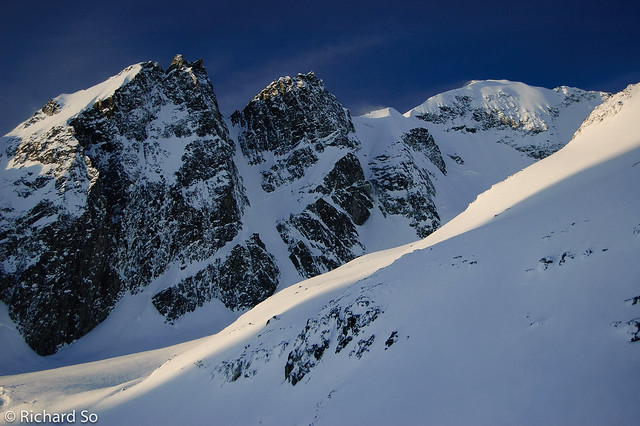 North face of the Owls. 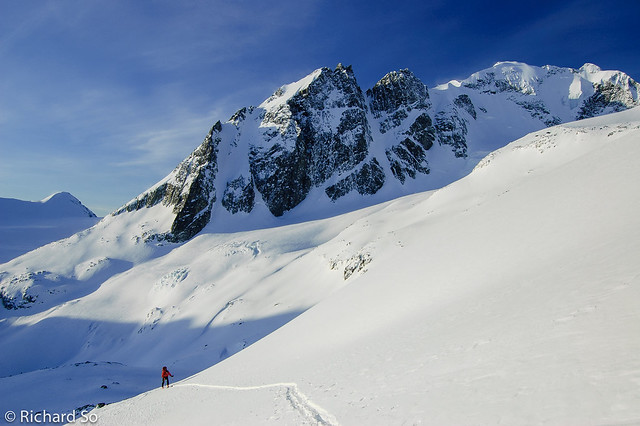 The top half of the North face of Weart is visible on the right.

We catch up to Greg and his partner at the 2400m col above the Mystery Glacier. They descend first, finding good snow in this north facing slope, protected from the scouring and compacting effects of the wind. A good sign for their committing descent later this afternoon. I hoot and holler, turning my skis with ease down the slope.

We climb up again to another high col on Hibachi Ridge. From the top, we are rewarded with another run.  Another untracked powder slope with 400m’s of turns. 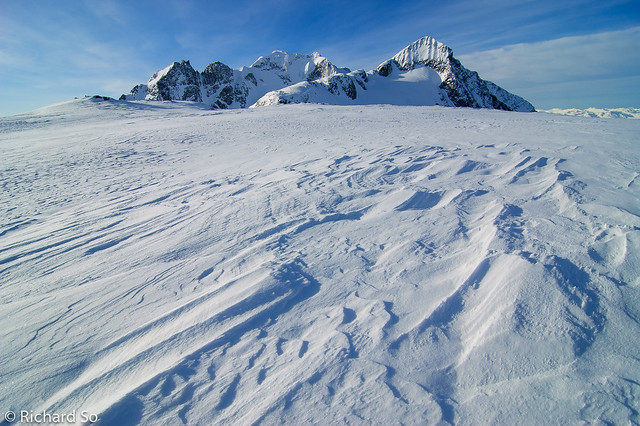 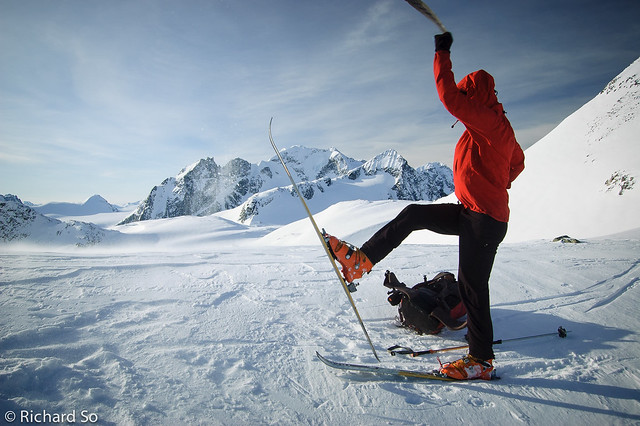 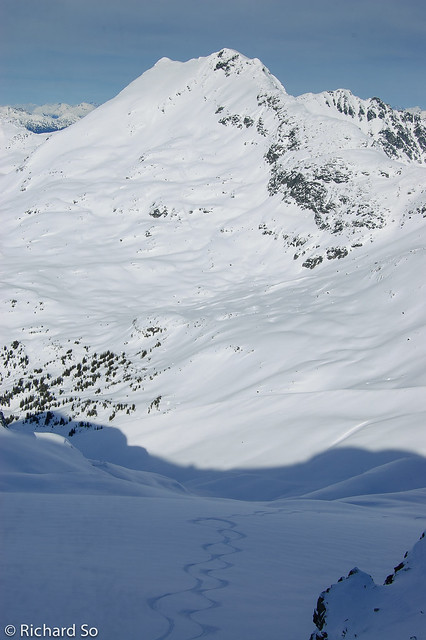 Tracks leading down into Mystery Creek. We skied the left edge on the south face of Mount Currie. 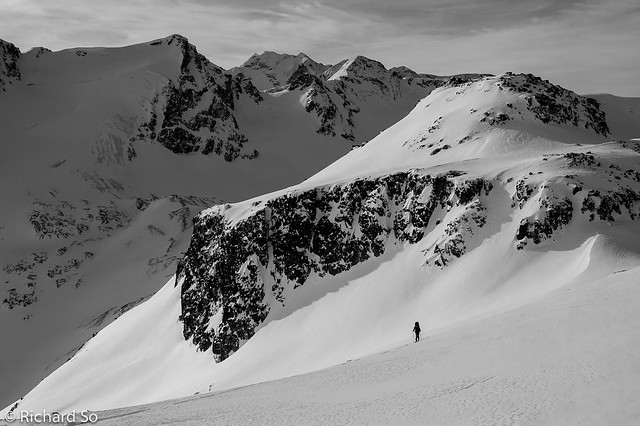 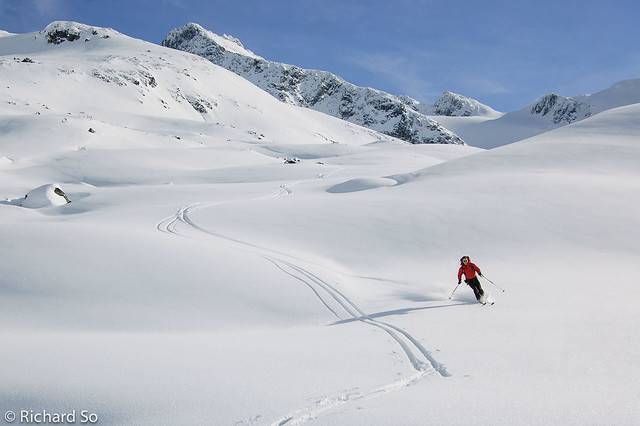 We were now in the headwaters of Mystery Creek – the south face of Mount Currie beckoned me. The ski terrain around here is awesome. North and west facing runs up to 400m long on Hibachi Ridge. The south face of Currie is 600m of 35deg skiing. Another 900m run from the col east of Currie down into Gravell Creek. No big deal. It was an easy day and a half ski to this point. As of now, this area sees more access from machine-assisted users, with helicopters dropping off skiers and guides on Mount Currie, which is a kilometre and a bit north of the park boundary. This traverse can be done with a heli-drop on the summit, and then a fast ski out in a day back to Blackcomb. But you would miss out on a lot of good skiing.

On the south face of Currie, I could see all of the Whistler valley below me. The 360 degree view was phenomenal – especially of the expansive Pemberton Icefield to our west.  I waited for Bram to catch up to the summit, hoping to start the descent soon. The south face was already cooking in the sun. The south facing powder was good, but not as good as the turns earlier in the day. 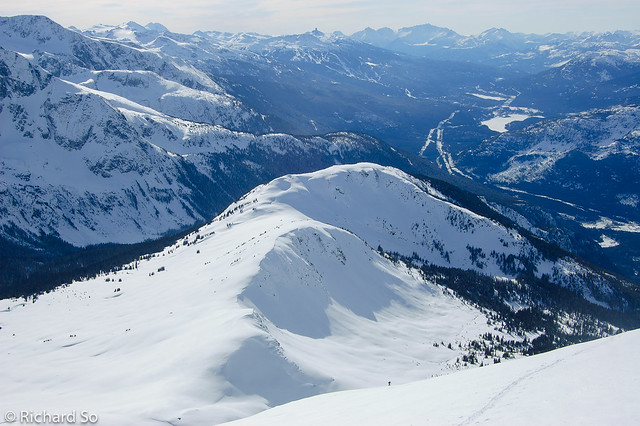 Bram is the small speck skinning up at the bottom of the photo. 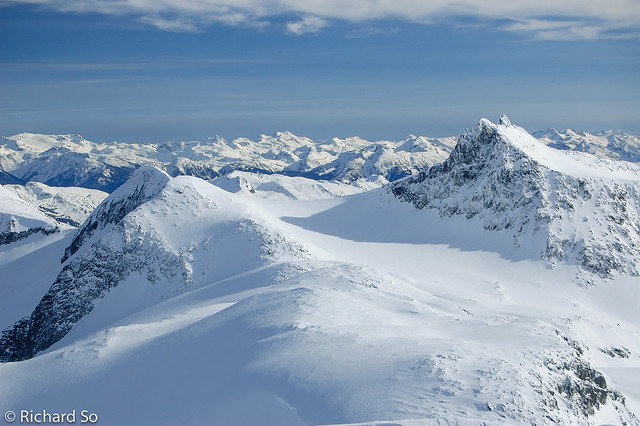 View from the summit of Mount Currie 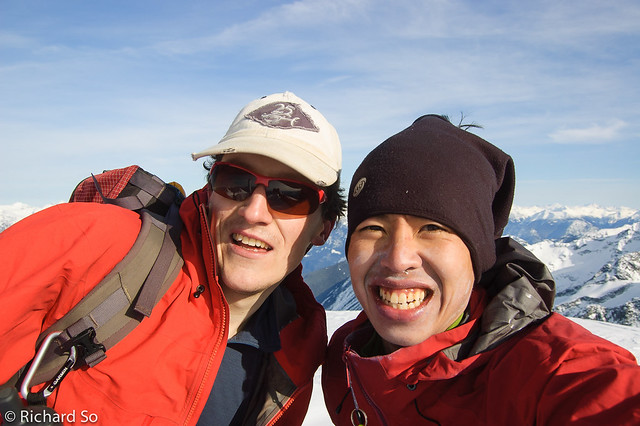 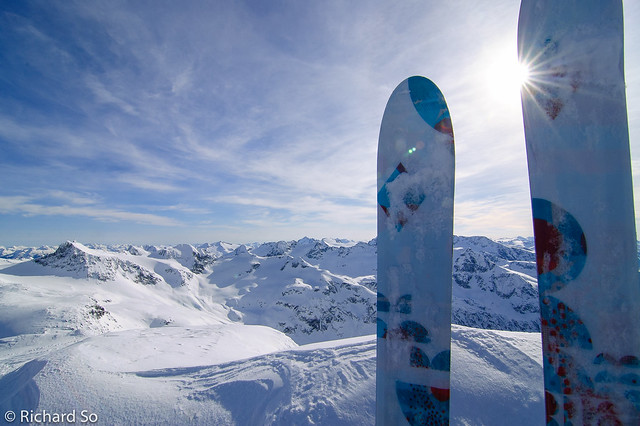 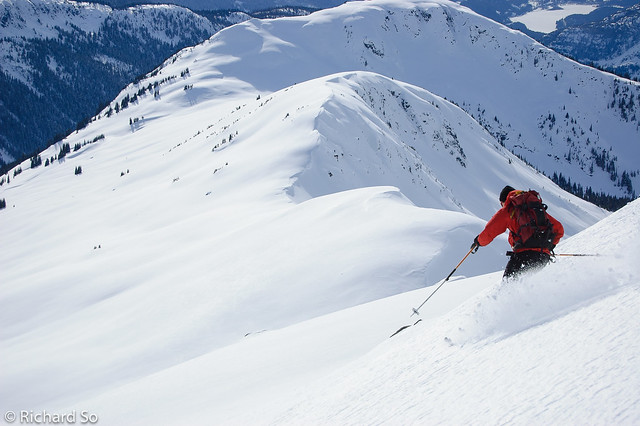 Hungry for more powder, we head east to a line on Hibachi Ridge late in the day. In the late afternoon, we wait until sunset for the slope to change from white to vibrant hues of orange and magenta. The descent was perfect. Smooth buttery turns down the 35deg slope. This line doesn’t have a name. It’s not visible from Whistler or the highway. Nobody else would blog about it. But it was awesome. It was a fantastic feeling to be out here in this wild spot, but so close to home. 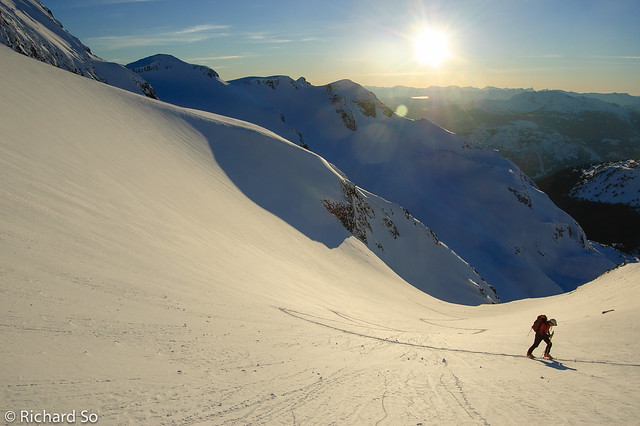 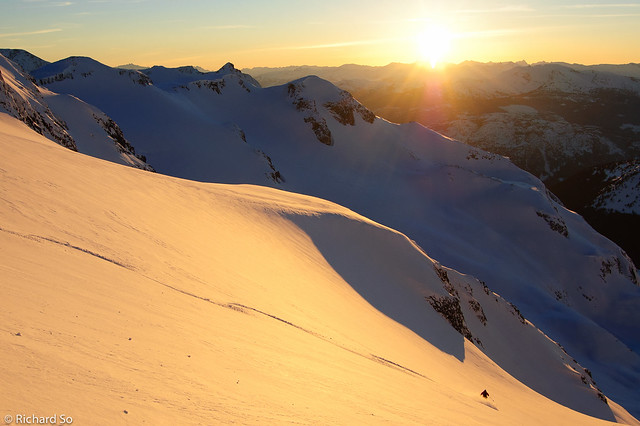 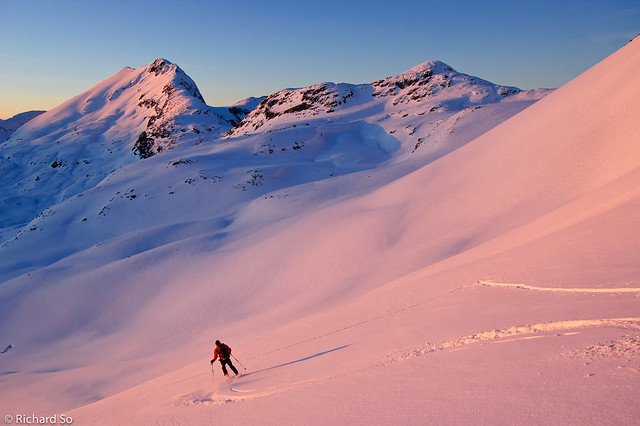 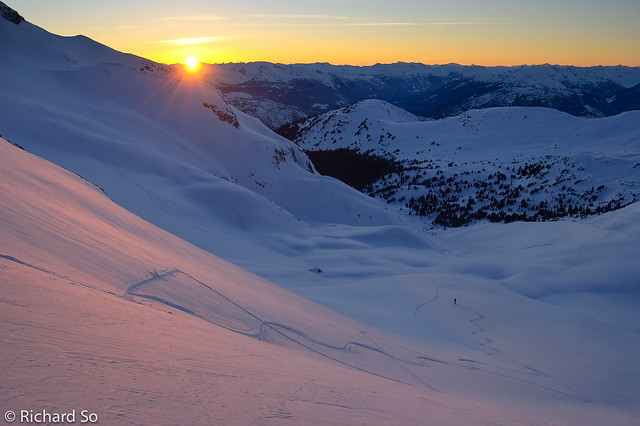 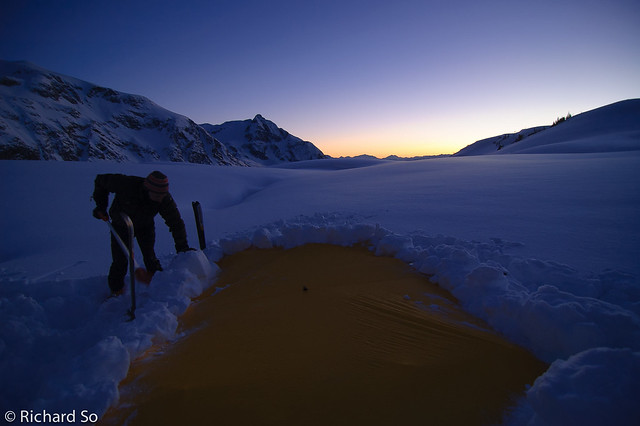 This was our tarp setup. It’s light and works well, but takes some effort to dig out a sleeping space.

We wake up to clouds the next morning. The weather was changing for the worse. There was a fog bank down in the valley, quickly rising to blanket us and obscure our route. We rush up to the col southeast of Currie, but the clouds beat us there first. Easy travel on skis transformed into sluggish forward stumbling, wondering which way was up and down in an otherwise sensory-blocking environment of mist and fog. There are some methods, like rolling snow balls down a slope, or in our case, small rocks. The compass came in handy, and so did the rope. “Where is the col?” I wonder, as I toss the rope to get a sense of direction. “Go left, we’re almost there,” Bram says, looking up from his GPS.

The skins came off at the top of the snow. My skis were ready to glide over the powder below us. Unfortunately, the winds had transformed the slope into breakable crust. The descent was slow. I was cautious of going fast, nervous about what was below. The clouds linger, and I wait for a clearing window to scout the best line down. At the bottom, we continue down along Gravell Creek, now forcing a line through the bottom of avalanche paths, with deteriorating snow conditions as we travel down. The moisture from the mist was condensing into the tree-bombed covered snow pack.

Eventually we reach a major junction in Gravell Creek at 900m. John Baldwin describes the route well in his book. Cross the creek, then climb northeast out of the creek to reach a forested ridge, 1km east of the creek. Then descend north to reach the Gravell East Spur roads to reach the Green River FSR, and then west to the Green River bridge southwest of the Pemberton airport. Bram and his friends took a different route last time. They continued north down Gravell Creek, reaching a steep cutblock at the end of the Gravell Creek road. Punching through bad 20-year old second growth in thin isothermal snow was how they described the kilometre long journey through the cutblock.

We reach the end of the snow a few hours later, on the other end of the Green River bridge, ready to take off our boots. Another awesome Coast Mountain trip. 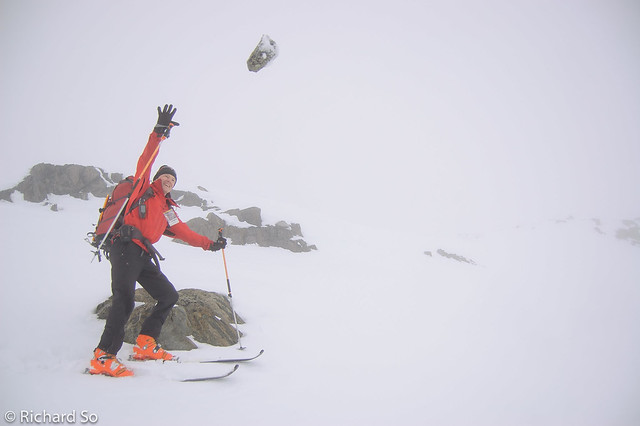 Bram deals with the navigational challenges. 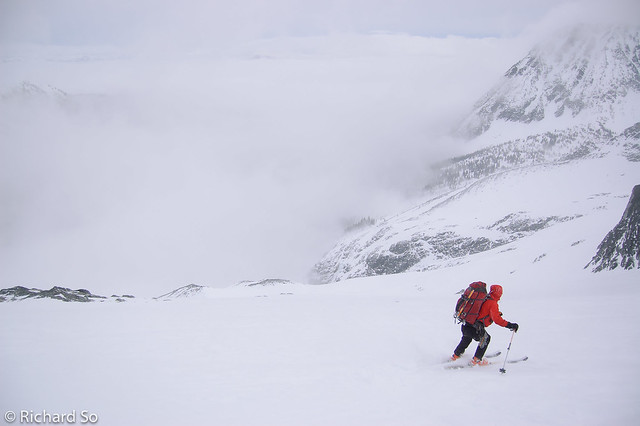 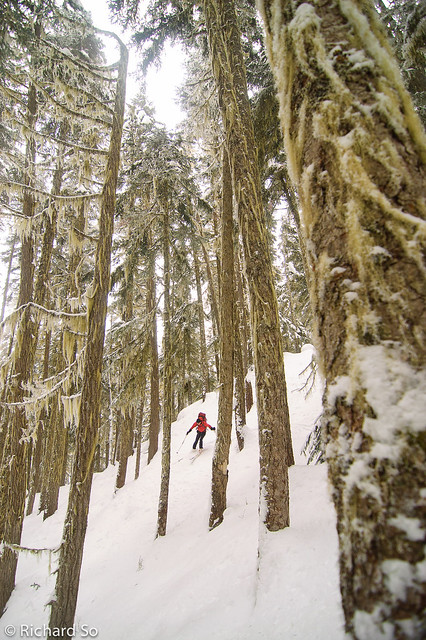 The Black Tusk and Panorama Ridge