This is a story about a close call that I was involved in, a few weekends ago on the Birkenhead glacier. It might be a bit wordy, but I’ve tried to include as much detail as I can.

It had been a dry week and the forecast for the weekend looked reasonable. A plan was made to go into the Birkenhead area in search of couloirs to ski. Paul Kristen and I started off on a slow pace, plodding along in light rains and breaking clouds, pondering if the clouds would clear for the afternoon. Another friend, Saar was planning to join us in the evening. After a short ski up a logging road and then open forest, we arrived at an open area below the Birkenhead Glacier, perfect for camping. At 2pm, we left camp and started skiing up the moraine towards the Birkenhead glacier, looking for some turns along the way. At the top of the moraine, the weather wasn’t looking great, clouds were everywhere and it was windy. Kristen wasn’t feeling great and decided to ski the 400m vertical back down to camp. We crested the glacier and looked around, seeing slopes of various aspects, ranging from mellow north facing glacier runs, to a striking northwest facing couloir. Winds from the northwest and west, loading the runout fan at the bottom of the couloir.

Paul and I discussed our options, and we settled on the couloir instead of the mellow untracked glacier ahead. There was 10-15cm of soft snow deposited in the past couple hours through wind and convective flurries, sitting on top of a solid crust from wind scouring and solar effects of the past week. We decided to continue skinning, making a few more solid switchbacks before transitioning to a bootpack as the couloir steepened. There had been no avalanche activity that day, and at the time, we felt ok with our decision to continue up. The wind was coming from northwest to west, blowing up into the couloir, with snow blowing off the rock walls to the side. The climb up the couloir was slow, taking nearly an hour to climb the 1000ft couloir. It was definitely what I can only describe as deep snow wallowing. The snow was mostly unconsolidated. Paul struggled a bit behind my steps, I’m sure he was cursing me for being a little lighter. We topped out with an awesome sunset, ready for some steep turns down. Paul on the bootpack up. Wind effect on the snow surface. Nearing the top of the couloir.

It was really good skiing, there were genuine face shots on every turn. Unfortunately, that doesn’t necessarily bode well for stability though. During the descent, at 4:55pm, Paul triggered a soft slab, a thin 15cm wind slab that had formed up at the bottom, further loaded by our sluffs. The slope steepness was forty degrees. Overall, the couloir was the steepest line I’ve skied this season. I stopped on the side (see the blue dot) to take a few photos. Paul skied past me, opening up his skis as the snow quality improved further and the angle eased slightly. All of sudden, I heard screaming and saw that he was tumbling down the bottom of the couloir. I tried to look for him, but it was hard to see him in the powder clouds that followed. I thought I saw him come onto the surface once, and then I lost him again. Nice turns down. So far, so good. Shit. This wasn’t suppose to happen. Paul gets swept down on top of a slab avalanche in the couloir. 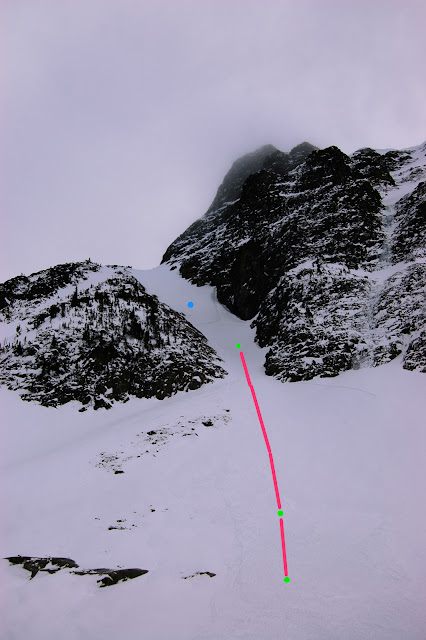 I stopped at the blue dot. The first green dot is where Paul triggered the slide, and the following two dots are where he stopped.
As I skied down to find Paul, I triggered a second avalanche on the hangfire above the first crown line. I made my first two turns, and all of a sudden the snow around me was breaking apart into slabs, with shooting cracks in all directions. I skied off to the side – somehow I kept my balance on top of the slab. Paul wasn’t so lucky. He saw the second avalanche that I had set off, crashing down the slope. He was swept further down, and both of his skis finally released from him at this point. Another few seconds passed, and I saw him again – I was incredibly relieved. I skied down along the firm bed surface to reach Paul, who was ok aside from a few sore spots. We were very lucky. We started traversing the slope to look for his skis – it was like looking for a needle in a haystack, the size 2 avalanche had propagated along the edge of the couloir and onto the fan, with an approximate width of 50m, a deposit thickness of 30-40cm, and length of 150m. We were only able to recover one ski. By this point it was dark and cold, and we descended back down to camp with his one ski.
The next day, Kirsten, Saar and I went back up to the glacier and enjoyed some great mellow turns in nice snow with some sunny breaks. This is a really nice area with a long glacier run down from the summit. You should expect to share the area with heli-skiers though, there were landing stakes in a few spots. Saar on the Birkenhead Glacier. Saar and Kristen heading up the glacier. It’s really quite nice up here. Saar enjoying his turns down the Birkenhead glacier.

And now, a few things to reflect on: This was the avalanche bulletin from Friday February 15, 2013.

While the windslab at the base did not seem to be an issue on the way up, it was further loaded during our hour-long bootpack up the couloir. Each turn on the way down released some of the recent storm snow in small sluffs, which accumulated at the bottom. By the time Paul made his final turns at the bottom, it was enough of a trigger for the snow to slide. We didn’t give the new storm snow any time to stabilize.

It was already late in the day when we started climbing up, and we had decided not to ski the more mellow slopes on the glacier beyond. We were chasing our blue bird dreams and summit goals, picking a ski line that was more challenging. We were complacent in our decision making with regards to the snowpack. We observed that there was some fresh snow with a questionable bond to the surface below. I’ve ignored similar conditions in the past and have climbed up slopes without consequence – unfortunately this time we weren’t so lucky. The latest bulletin called for moderate danger on Saturday, and cautioned that associated winds are likely to shift new snow into windslabs in lee terrain. It also said to be cautious and stay off recently wind loaded areas. There had been convective flurries during the day with snowfall accumulation of 15cm, and it had been windy, 20-30km/hr wind at the col.  I’m just happy this didn’t happen on anything bigger. These were all observations that we had made, but didn’t piece together well enough.

Stay safe out there! 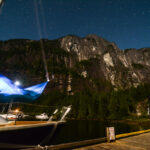