I’ve been meaning to post something new, or maybe even a summary of the ski season to date. That’ll come soon hopefully, now that we’re heading into the second half of the ski season. Unfortunately I’ve been too busy face planting in the snow so I hardly have any energy left after a ski trip to process photos and write about it. So to keep things simple, I’ll just show a few photos from my most recent trip to Snow Zone, a backcountry ski area accessed off the Duffey Lake Road, north of Pemberton, British Columbia. Sam wrote a great trip report, which you can read on the VOC Trip Reports page. 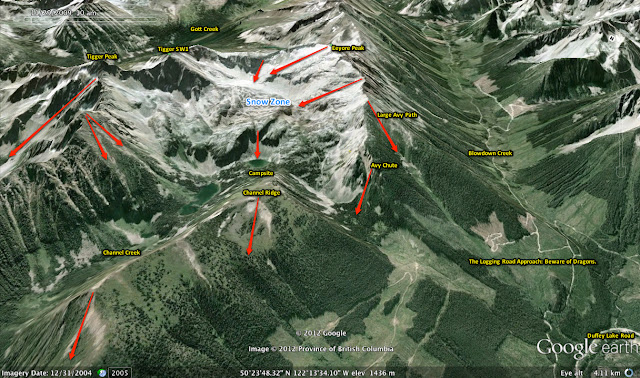 I’ve tried to annotate the area a bit, to give an idea of the various ski runs possible from the area. We focused on skiing within the Snow Zone, between Tigger SW1 and Eeyore Peak, but the north side of Tigger Peak looks like it holds some great skiing (accessed differently than this trip). Christian and Natalie skinning up through the sunshine. Being Vitamin-D deficient Coastal skiers, we basked in the sunshine and turned rosy after only two days of skiing. That might have been all the sunshine we saw on a March weekend though. A wide angle view of the terrain around Snow Zone. The skiing was good. I’m sure we made some heli-skiers proud with our powder conservation technique. Sunshine, powder, skiing. I love long days in the mountains, mostly the sunrise and sunset, and only a little bit of the high output associated with those days. Scrambling around at sunset, with a fabulous view of our turns off Eeyore Peak. It’s a beautiful place. Powder turns at sunset, with less than ten turns to go until camp. Energy levels were replenished with apple pie and chocolate cake, and stories were told under a starry canvas in the great outdoors. The next day, we headed back up into the Snow Zone for a repeat of smiles, powder turns and sunshine. Our first turns down this east facing slope, which we named the “Sun Run” left us with smiles while propelled us through the rest of the day, and work week for some of us. Nick, in front of the lens. As another fellow photographer, Nick is as equally baffled as I am in terms of how we actually look while adventuring outside. 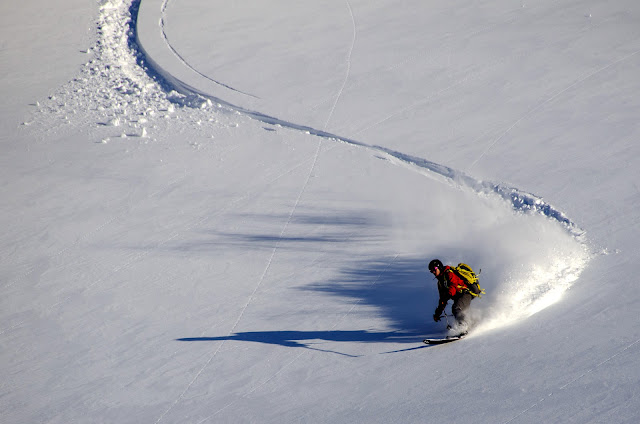 Thanks for the great photo Nick! Photo by Nick Matwyuk. Frances and Ben went for a scramble up Eeyore Peak, a perfect spot to gaze into the Stein Valley. Sam skiing down through some of the fantastic snow condition that we experienced on the weekend. Shadows and powder. Christian skis down through the sheen of surface hoar.