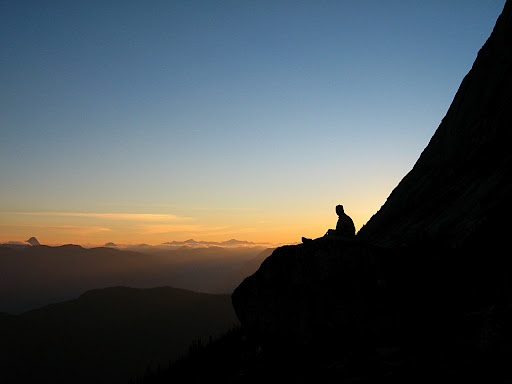 Four unemployed climbing bums (Nick Elson, Tyler Linn, Krystil Koethler, and I) spent four days climbing in the Anderson River range, north of Hope BC.  This place is amazing! Big granite domes that resemble those in Yosemite, but without the crowds or the rock quality.

The first day was spent hiking into the area. Although you can see most of the Anderson River group from summits along the Coquihalla highway (like Needle Peak), you actually have to drive a long ways up the Fraser canyon from Hope, and then along a gated logging road. If you ask Cattermole Timber and tell them that you’re going climbing there, you can get a key for the gate (though it wasn’t locked when we drove up and down). I think it opens at 8am, closes at 3pm.

Five years ago, the approach to all of these peaks would have been much easier. But today, the logging roads are covered in slide alder. It’s fun. Once we left the road, we traversed along old cutblocks, second growth, and then up talus slopes to the Steinbok-Ibex col. Despite the four hours of slogging, the views and the atmosphere up on the col was worth it. From the col, you could see Old Settler, Baker, Urquhart, Silvertip,  Slesse, Breakenridge and more! It was nice being up high in the mountains. There was just enough snow at the col to get water from, but it was melting fast.

The next morning, Nick and I left camp around 10am (a real alpine start) to climb the classic southeast ridge of Ibex, 6 pitches of 5.9. After 10 minutes of walking, we were at the base of the route. Nick and I swapped leads, and we were on top by 1pm. It’s a really fun climb. The best pitch was a finger crack on an exposed face.   Krystil and Tyler arrived shortly after.  The highest point of Ibex is a refrigerator sized boulder. Nick and I took summit pictures on it, I napped on it for half an hour, not realizing that it actually moves. We tried to push it off the summit, but it would just rock back and forth. We rappelled the route, and was back to camp well before sunset.

The next day, Tyler and Nick were planning to climb the Springbok arête on Les Cornes, one of the more popular hard rockclimb in south western British Columbia. Krystil and I were planning to climb something more within our skill level; the north buttress of Chamois. It’s 12 pitches of 5.6, it’ll be so much fun. Plus, Tyler said he climbed it with his dad in a thunderstorm several years ago.  How bad could it be?

Unfortunately, the north buttress of Chamois is on the other side of the massif, which meant Krystil and I would have to hike down to the road. We considered traversing the west side of Ibex and then hiking around Chamois to avoid the logging road, but the slabs didn’t look easy to traverse. While bushwhacking down in the dark, we somehow managed to miss the higher switchback of the road. This meant an extra long bushwhack in the dark down the cutblock, until we stumbled upon a clearing. Both Krystil and I thought we were hallucinating when we saw the road.  We passed out on the road, thinking about bears. At least I was.

We left the road at 6am the next morning and did a long traverse across the cutblock to the base of the Les Cornes toe. This part is tricky, you don’t really want to gain or lose any elevation. Eventually we found some flagging tape which lead to an ok route up through steep trees, and then open talus and snowfield to the base of the Chamois north buttress. If you came here and only wanted to climb Chamois, the area below the base of the climb makes for a very nice bivy spot.

It’s hard to mistaken the base of the route. Just look for the obvious buttress with the low angle slab at the bottom. Krystil led the first pitch, and we had to simul-climb a bit so that Krystil could get to the belay tree on the treed ledge. It was somewhat unnerving, since the last 10m to the trees were on wet grass with no protection. I would soon discover that wet grass is just part of the fun. We saw a rap sling nearby, and we thought about backing off. It’s always hard to get motivated by the first pitch, since they’re usually crappy, and it’s easy to back off the route. At this point Krystil realized that she usually climbs with a more experienced partner and I realized that I’ve never done any alpine rock route aside from Ibex. My only other alpine rock experience was the Camel, not exactly a long route.

I walked along the treed ledge, and saw a nasty wet chimney, but walked past it, thinking that it was too scary looking. I climbed up approx 15m on some easy blocky – off width terrain, and ending up downclimbing when I saw blank face above me. I ended up climbing the chimney pitch, which was more of a wide corner, with abundant face holds and a lack of gear. Part way up, I wondered if my #3 camalot in the wet mossy crack was really confidence inspiring. Krystil later told me that on some of her pitches, she was swearing as she tore out moss chunks to place gear.  I found another rap sling at the top of this pitch. It’s really unnerving to find rap slings on a route, since you don’t know whether you’re on route, or making the same mistake as somebody else who is now safe at home. Krystil lead the next gully pitch, which wasn’t too bad. The following pitch is terrifying. It’s basically a 40-50m pitch along a “long, exposed, sloping grass ledge with a few trees.” Fairley also calls the ledge traverse from Crown Mtn to the Camel “incredibly exposed,” but this ledge is far worse. It was wet, and at one point in between pro, I was grabbing wet tuffs of grass praying that my feet wouldn’t slip on the mud and send me in a pendulum down the north face. After a little bit of sweating, and some creative gear placement, I belayed Krystil across. Since it was my idea to keep on climbing, I took the next pitch, supposedly the crux pitch. I traversed across a slabby platform, and then up into a gully/corner. Krystil lead the next pitch up to underneath a dripping roof. McLane calls these two pitches the difficult 5.6 pitches.

However, the next pitch on the slab traverse below the roof was far more terrifying. Fairley describes it as “go left on slabs (5.4, much harder when wet) to a belay ledge.” I wiped my shoes on my pants, clipped a tattered sling, put in a bomber tcu next to the sling, and then stepped out of the gully onto the slab. On my first attempt, I carefully placed both feet on some small wet ledges, but got scared of the potential to slip, and pendulum across into the gully. I managed to make it across on the second attempt, by stretching out my left foot until it touched a dry spot, smeared on it, and finally found some better crimpers. I think I might have **** my pants. I’ve climbed easier 5.9/5.10 slabs. In retrospect, this would have been way easier if it was dry. Maybe try late summer. The rest of the traverse is easier, since you can now put gear into the roof. We took a well-deserved break at the belay ledge, and then realized that it was already 3pm, and we were only averaging an hour a pitch together.  We kept on talking about quitting climbing, how you only get 10 good years of climbing, and taking up golf yoga and jigsaw puzzles.

I lead the next pitch which steps out left from the ledge, up blocky terrain, up slabs to another ledge. The next pitch consisted of runout face climbing. The crux involved faceclimbing similar to Star Chek, minus the bolts. There was one hard move where I was only protected by a small nut far 10m below, and a non-confidence inspiring yellow tcu with one lobe sticking out. McLane isn’t joking when he says good routefinding is essential for the route, and that you have to be willing to run it out on mid-5th terrain. He also mentioned something about greasy conditions in the early season.

The next two pitches were much better. Krystil lead one, and I lead the final pitch to the summit. I was quite happy at the top, since we didn’t encounter a cornice, we had topped out, and it wasn’t dark. There was a cornice further to climber’s right which drips water down the route until August, but we managed to avoid it.  I managed to build my most bomber anchor yet, with 5 glorious pieces. Maybe it’s just my lack of climbing experience, but it was hard to trust any of the anchors we built on the route.  It makes you appreciate the shiny 3/8” bolts that you find in Squamish. It’s funny when you top out of a route, since you suddenly become ecstatic about finishing the route, forget about how scary the route was, and start dreaming of more routes to climb. I guess most climbers have short-term memory. Maybe that’s why we write trip reports.

I walked over to the true summit of Chamois, higher by maybe 1m, and further along to see how Nick and Tyler were doing. It turns out that they had summited 2 hours earlier around 3pm, and were already finished with the descent at this point.

The descent is straightforward, basically walk towards the Chamois-Anderson col, climb down loose rock, and then descend on scree until you can traverse back over to the north face. There’s still some snow lingering around, but ice axe/crampons were not needed. We ended up bushwhacking through the cutblock in the dark. It’s tricky here. Once you leave the flagged route, keep traversing just below the toe of Les Cornes, and continue over the forested ridge. It was very tempting to descend, but you’ll end up in trouble if you go that way. We stumbled onto the logging road again in the dark, and decided to bivy on the road again. I thought a bear was going to eat me.

We hiked out to the main logging road the next morning. With lighter packs, the slide alder wasn’t so bad, but it felt like a washing machine with all the morning dew. Tyler and Nick showed up shortly afterwards (they slept at the Steinbox-Ibex col, and had a longer walk out).

To summarize, go here, and climb some of these awesome routes. Ibex is amazing, and feels more casual even though it’s technically harder.  Chamois would make for a nice day in the mountains if you go in the late summer, as long as you’re comfortable running it out on easy climbing.