I spent two days skiing in the Cayoosh Mountain area of the Duffey Lake Road. It hadn’t snowed since Monday, which was then followed by an arctic outflow which blasted most of the snow off the north aspects. Finding powder and good skiing was going to be a little harder this weekend. Fortunately, the area around the Cayoosh area was less affected by winds, and we were able to find good skiing on the south aspect of the big Rock and Roll gully, and even nice boot top powder on the northeast glacier of Cayoosh Mountain.

Cloudy skies over the Joffre group. The weather was mostly greybird up on the Duffey on Saturday, while the region to the south saw more sunshine that day. That was fine by me, we were about to ski a south facing line! There was an inversion today, with the parking lot at a chilly -15C, while it was around -2C at 2000m.

The light was a bit flat and cloudy most of the day. Black and white helps with this, a photo style that I don’t experiment with very much. I love the vibrant colours. Will skins above the Seven Mile Creek headwaters, with Cayoosh Mountain behind him.

The main avalanche problems today were lingering wind slabs. We were fairly conscious of the possibility of triggering a wind slab near the top of the run, due to the “reverse loading” from the northerly winds in the prior week, transporting snow onto the south aspect.

Looking up, we could see old avalanche debris near the top of the open bowl, which was covered up by a light dusting of wind-transported snow. We took a slightly lower line rather than skiing ridge from the very top and traversed into the main run. At first, it was fairly firm edge-able snow, which transitioned into nice boot top powder where Will is skiing.

Will dropping into the lower sections of the run. Down here, the run turns into more a gully. Obviously, a place to avoid if you have any doubts about the stability. Even in these conditions, the skiing was a little funky. Due to the tightness of the chute, I was skiing in the middle, then make a turn into the side, where the snow was deeper and the gully walls steeper. I was constantly thrown off balance. It wasn’t the best skiing down here for me! Next time, I’ll try to ski one of the other lines further over, which don’t have as pronounced of a gully feature near the bottom.

Elsen gets it. Onion tart. Slowly peeling back the layers of the onion of knowledge (as my cooking experience, knife skills, rolling pin abilities grow or your “Epicurious” chose when to pass on the crucial information seeing that you’re ready for it) is one of the best parts of living a pie eating life. It’s delicious, it’s aromatic, it makes you full, and it preserves the experience, for you and others. It’s not about elitism, it’s about making every young fruit, when they’re ripe for it, just a little bit more fulfilling in their chosen pastry.

Standing on top of our next run. It warmed up in the afternoon, and we were happy with our one run down the steep southwest aspect. We skinned back up, but this time took the more mellow line back down to Seven Mile Lake, and then dropped back down the headwall into Cayoosh Creek.

We weren’t the only ones out today. There were three other snowmobilers in the area. They seemed to be fairly respectful, and they spent their time shredding the other slopes while Will and I skinned up. After we were finished and skied back down, they went up and brapped the little slope we were on.

The next day, Guy and Geoff joined me for another day up in the Cayoosh area. I was out of ski partners, so I was really happy to have connected with Geoff for the day. The plan was to go up the Northeast Glacier, and depending on the snow, either ski back down the same way or make a loop of it and go down the east facing Armchair Glacier. We watched a group of seven ski down the northeast glacier on Saturday, but it was hard for me to tell how the skiing was for them. It didn’t help that they had flat light for their descent.

This is a photo of the northeast glacier of Cayoosh, taken from the Marriott ridgeline in the summer. The approximate ski line takes the centre bench, from lower right to upper left. This is a route for safe avalanche conditions only. There’s a photo on Bivouac.com by Mitch Sulkers, of a large avalanche off a convexity on the right side, which ran out and across the glacial bench. Something to keep in mind when skinning up and skiing down here!

Looking back at the Cayoosh Mountain Northeast Glacier Sick Couloir and Sick Face. The likely first descent of the face was down the right skyline, by Alex and Maddy back in April 2012. If it wasn’t documented in the interwebs, did it actually happen?

The clouds were rolling in and out. I wasn’t sure about going up the steeper part of the summit. There was going to be wind packed snow and not much of a view given the cloud conditions. I’ve enjoyed some great bluebird conditions up there, so bootpacking up some sastrugi was less desirable than the boottop powder on the glacier.

Sarah at the col between the Armchair and Northeast Glacier. A familiar face, in a familiar place. This feels like a long time ago, when we were also up here skiing in 2011. Here’s a trip report from the past

Going up inside the clouds

Unfortunately, I left my pie behind in the fridge in Squamish. This was a bit of a disaster, as I had to buy a lunch at Mount Currie Coffee Co. I chose poorly. I thought that with the warmer weather,  I could get away with a chicken pesto wrap. Unfortunately, the lettuce in the wrap froze, and I had a fairly unpleasant eating experience up here in the alpine. And this is reason #314, why pie is better than salad in the mountains. 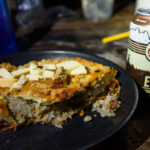 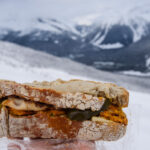